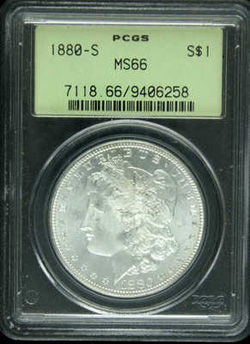 In an early edition of best-selling author Scott Travers’ Coin Collector’s Survival Manual , PCGS Founder David Hall notes that graders in the early days of the company (founded in 1986) were reluctant to give super high grades and so coins in old green holders might actually earn a higher grade if resubmitted.

Well, I’ve been doing this for some time now, first through my dealer and then through my club membership, and not one has come back with a higher grade or, more recently, a plus.

I used to think submitting old green label coins for regrades might pay off because the jump in prices by one point can literally be in the hundreds if not thousands, depending on the type.

Online auctions make a big deal out of those green holders. For instance, Teletrade lists such coins with an icon titled “old slab” (which includes older ANACS and NGC holders, too).

Conventional wisdom says graders were more conservative in the late 1980s and early 1990s. ANACS old holders are “small.” Thicker NGC ones look like “soap dishes.” But small ANACS and NGC soap dishes lack the hype of old green holders–so much so, that numismatists know the label by its initials, OGH.

There are two main varieties of OGHs, typewritten and printed. I’ll include pictures of both in my two most recent same-grade re-submissions so you can view the labels. 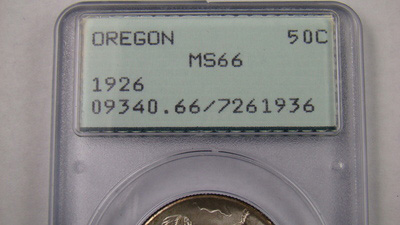 PCGS, like other third-party grading companies, promises that if you submit a coin for a regrade, you will get the same or higher grade and will never get a lower one. Coins are cracked out of holders and sent to the graders who view the coin as if raw. If the grader gives the coin a higher grade, you get that. If not, you get your old grade in a new blue holder.

I am going to stop sending in old green holders because all I get in return are new blue holders.

What to make of this?

I asked my local coin shop owner, an authorized PCGS dealer, who slabs hundreds of coins every few months in bulk submissions.

Few hobbyists, he says, can tell the difference between a high MS66 and a low MS67 coin. Most of the obvious undergraded coins were sent in for regrades years ago. In the end, an OGH usually brings a small premium on par with a green CAC sticker (no relation). So you’re better off with the green label.

Apart from the cost of regrading, he adds, a coin in an old green holder has its own allure. In that sense, the old green holder IS as it used to be–part of numismatic history–which we should preserve.