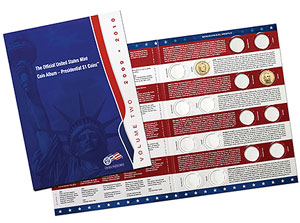 The album has been custom designed and created with the collector in mind. It serves as not only an album to hold Presidential Dollar coins, but also an educational tool. The coin holders in the album allow both sides of the coin to be seen. Each President is accompanied by a biographical sketch and a timeline of significant events during his Presidency.

The album will store and display Presidential Dollar coins from 2009 and 2010. There will be places for the circulation strike coins produced at both the Philadelphia and Denver Mints.

The albums are priced at $11.95 plus shipping and handling and are available on the US Mint’s website.