Fifty years ago last week, United States President John F. Kennedy paid a visit to the ancestral home of his forbearers, all eight great grandparents began their life in Ireland and by the end of the 1840’s, all had left the country and settled in Boston. On the 27th June 2013, half a century after this historic visit, the Central Bank of Ireland launched an anniversary coin remembering the events, Michael Alexander of the London Banknote and Monetary Research Centre was invited to the launch in New Ross, County Wexford for the presentation of the first strikes to the Town Hall and to see the celebrations of this small town who fondly remembers one of their most famous “Sons” of Ireland. 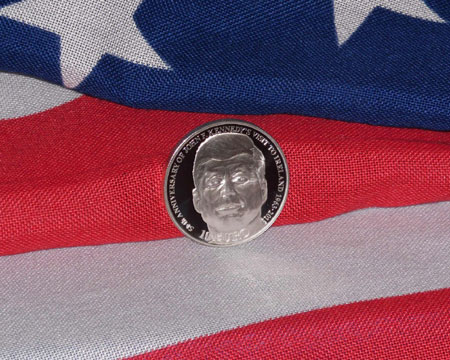 The obverse of the new coin depicting a front-facing John F Kennedy – one of the most inspiring and recognizable images of the president.

The era may be that of our parents and Grandparents, but for the last week, an event which occurred 50 years ago to the day, was fresh in the minds of so many who either witnessed it first-hand, were just children when the event occurred, or who were just told of what happened the day the President of the United States came to Ireland on a visit. This extraordinary visit would highlight the country in a way it had never experienced before. The time was full with hope, imagination, goodwill and a sense that we collectively or individually could accomplish and achieve anything we set our minds to.

This feeling of goodwill was so because of the man who delivered the message. He was young, handsome with an electrifying and captivating personality, the epitome of what and who America seemed to effortlessly churn out in their millions but he was also to many in the old country simply, a son of Ireland – who had come home. He wasn’t just an ordinary man returning to the country of his roots, another man discovering where his forefathers had originated and why they left their homeland, their families and cultural ties in search of a better life. This man was John Fitzgerald Kennedy, of the distinguished Irish-American family in Boston Massachusetts and as it happened, President of the United States of America. He was making a pilgrimage to not only the country of Ireland, but right down to the very homestead on the outskirts of New Ross, a small town in County Wexford on the east coast where his family had once and still lives. 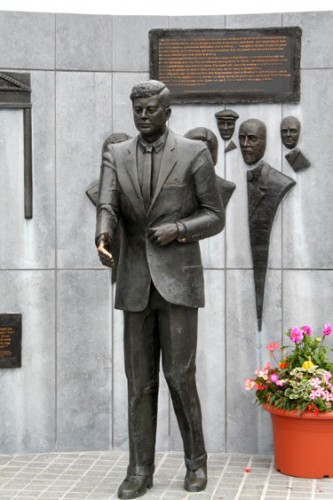 Life-size statue of the President along with representations of those family members left behind and those who emerged in the later decades. The President is posed with his right hand extended.

The President would visit Ireland after paying a state visit to the Federal Republic of Germany. The president’s words of defiance as well as encouragement to the residents of Berlin – resonated around the world when he assured Berliners that he stood shoulder to shoulder with them – as a Berliner himself – “Ich bin ein Berliner.” Just a day after his historical speech in front of the Brandenburg Gate and the newly constructed Berlin wall separating the former capital from east and west, President Kennedy landed in Dublin along with several members of his immediate family and were exuberantly greeted by Dubliners and of course, the then-president of the Republic of Ireland, Eamon De Valera – who had his own ties to the US, having been born in New York city in 1882. An historic four day visit, to all corners of the country but the most memorable and touching moments – only 31 minutes in total, was when the President addressed the thousands of well-wishers in the quay-side of New Ross. 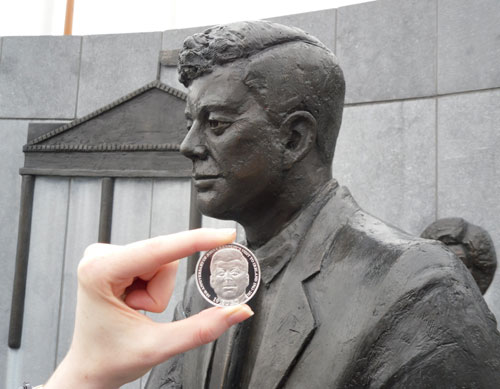 Image from the Central Bank introducing the new silver coin, the background includes the life-size statue of John F Kennedy erected shortly after the President’s death.

Images of this visit now appear everywhere in the pristine quay-side, on the 50th anniversary of the President’s historic visit. Banners fly from street lights and a monument which was erected just months after the President’s untimely death is visited by the many tourists who want to see just where the President stood on the 27th June 1963 and captivated not just the town of New Ross but the whole of Ireland. Some say he single-handedly sparked interest in the many millions of people around the world who shared Irish heritage, to re-discover their own roots, somewhere on the Emerald Isle. It was with great sadness of course, when just within five short months after the President’s sentimental and incredibly successful visit, the world would hear of the shocking news of his death from an assassin’s bullet, and Ireland would mourn his passing with the same level of sadness and grief as did the United States. 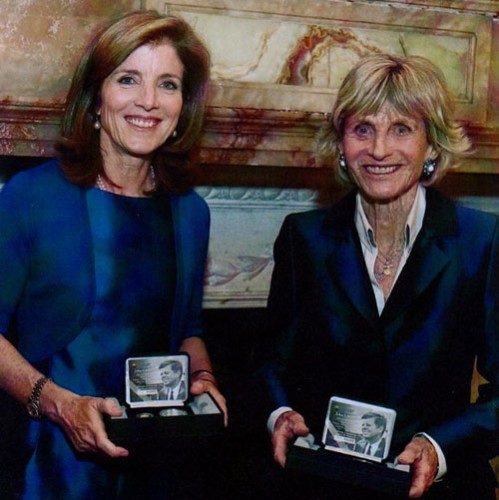 Caroline Kennedy-Schlossberg and Jean Kennedy-Smith pose with the newly presented fisrst and second strikes of the gold & silver coins during their official dinner hosted by the President of Ireland. (Compliments of the Central Bank of Ireland)

In this year of the Ireland’s year-long and official launch of “The Gathering,” a celebration which Ireland invites not only those of Irish heritage to get in touch with their own roots, but extends an invitation to everyone world-wide to experience the beauty and charm of the country and all that it has to offer. The two remaining members of the Kennedy family who accompanied President Kennedy in 1963, that of his younger sister Jean Kennedy-Smith and his daughter Caroline Kennedy-Schlossberg were invited to re-create some of the more formal and poignant moments of that memorable visit during their own visit commencing on the 24th June. Caroline Kennedy was also accompanied by her husband and three children who spoke both of their own and their mother’s delight at being invited to pay homage to the visit their Grandfather paid fifty years before. During the state Dinner, which was faithfully re-created down to the menu and venue, the two ladies were presented with the first and second strikes of the commemorative coin sets which were officially launched on the 27th June depicting President Kennedy. Mrs. Kennedy-Schlossberg then traveled to New Ross and inaugurated the new eternal flame adjacent to the earlier memorial to her father which had been put in place after his death. 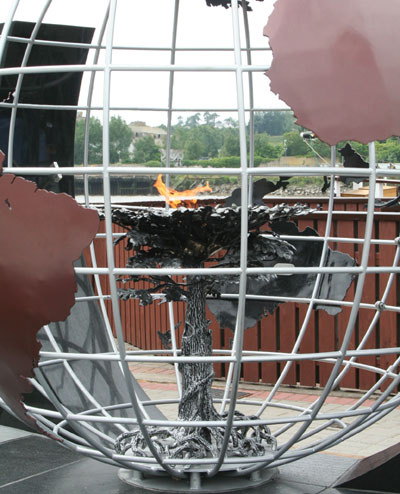 The new Eternal flame monument on the Quayside. The flame was transported from the eternal flame in Arlington National cemetery and from the resting place of President Kennedy.

The official launch, organized by the Central Bank of Ireland was held in the near three centuries-old Town council building in New Ross. In the presence of the newly elected head of the town council Naimh Fitzgibbon who welcomed Maurice McGuire the Director of Financial Operations of the Central Bank. He in turn introduced the Minister for Public Expenditure Brendan Howlan. It was up to Minister Howlan to officially launch the coin. Mr. Howlan also presented the Town Hall with the single silver coin and double gold & silver set. Further, Minister Howlan presented the same coins to the distinguished designer of the obverse – Mr. Tom Fitzgerald. The words during the launch and presentation included a mention of the historic visit, what the President’s visit meant to not only New Ross in particular, but to the whole of Ireland. The President’s comments on the day alone rang true and are still remembered by many Irish “This is not the land of my birth – but it is the land for which I hold the greatest affection.” 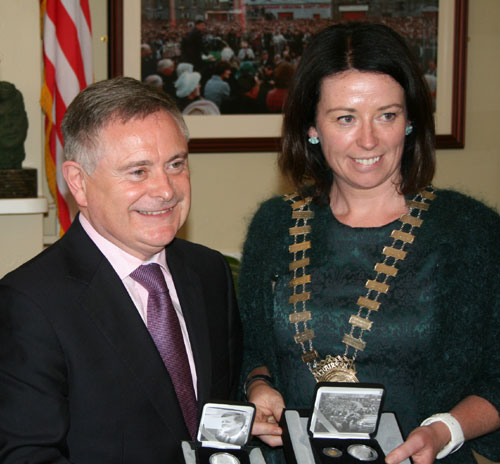 Minister for Public expenditure Brendan Howlin and chairwoman of the New Ross Council Niamh Fitzgibbon are pictured together during the presentation of the coins to the Town Council.

With ceremonies concluded, guests were able to visit the monuments already in place on the quayside, but now, the special addition which was added just days before, the eternal flame encased in a stylized globe, the fire being transported from the very flame which forms part of the President’s final resting place in Arlington National Cemetery. The globe is beside a reconstructed tall mast passenger ship “The Dunbrody” used during the early 19th century and the kind which would have been used to transport the many who were fleeing the famine during the 1840’s – including that of the President’s own Great Grandfather. 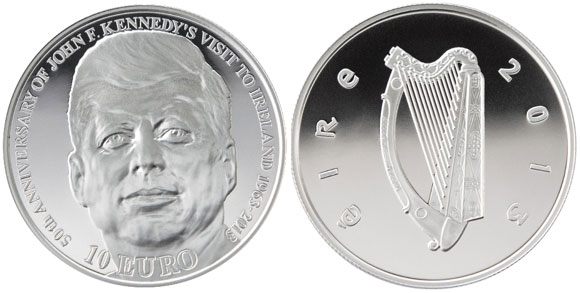 Today of course, if you find yourself in Ireland, you can trace the path of the President’s visit, he managed to take in the cities of Dublin, Galway, Cork, Limerick as well as New Ross in County Wexford. The very spot where he addressed the crowd also includes a special podium which included his speech to those present on the day. A visit to this corner of Ireland this year will not disappoint, and the coin certainly will not. It is based on an image of the President when he was at the height of his popularity and is reminiscent of the many photos which were placed all over the country in preparation of his visit. 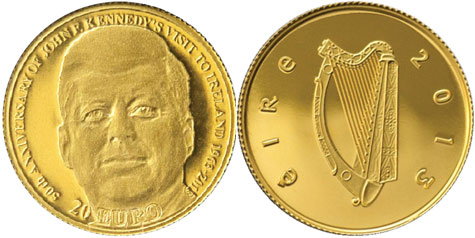 The coin is available in both gold and silver, as a single silver coin and a two-coin set. For more information, please visit the website of the Central Bank of Ireland at: http://www.centralbank.ie/paycurr/collector/Pages/Coinsets.aspx

My exclusive interview with Tom Fitzgerald can be found here.