The Royal Canadian Mint has launched a new coin featuring an important Canadian observatory that achieved international notoriety when it was the location of an incredibly rare sighting of a supernova in 1995. The Burke-Gaffney Observatory, located in the Loyola Residence Tower at Saint Mary’s University in Halifax, Nova Scotia, earned itself this enviable distinction when two Canadian astronomers discovered the supernova in a galaxy 70 million light years away! 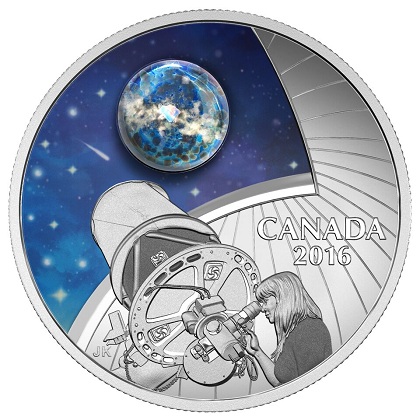 The coin captures the magic of the event with a borosilicate glass insert. The globule is refined to simulate the effect of gazing through a telescope, with a unique view that can only be created with handcrafted artistry. 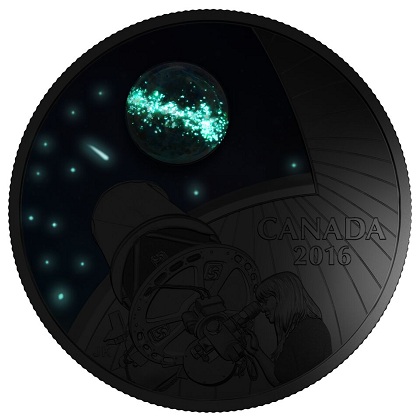 The coin’s engraved reverse is designed by Canadian artist Joel Kimmel and re-creates the dome of the Burke-Gaffney Observatory as a student looks through the observatory’s telescope. Against the softly colored glow of a clear, star-filled night sky, a unique glass insert captures the beauty of a supernova crafted by borosilicate artist Loïc Beaumont-Tremblay. The crystal-clear globule of boro glass contains an opal that represents the dying star, which is positioned over a darkly colored background and surrounded by wisps of swirled glass and glow-in-the-dark colors. There is a luminous quality to the insert that conveys this stellar explosion of light and energy, which could easily outshine the glow of its own galaxy, if only temporarily. 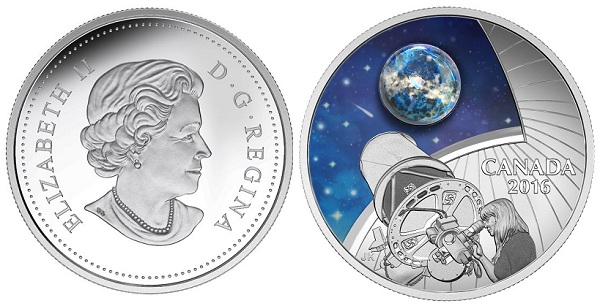 The obverse of each coin depicts the denomination and current definitive portrait of HM Queen Elizabeth II as designed by Canadian artist Susanna Blunt. The image has been used on all Canadian circulation coins and several commemorative issues since 2003. The denomination appears below the portrait.

This is the second coin in the star-gazing series dated 2016; the first coin featured the Observatoire du Mont-Mégantic. There is one more coin to be issued in this three-coin series, which is available by subscription. For more information on this and other coins on offer from the Royal Canadian Mint, please visit their Web site. Information offered in English and French, international orders dispatched where applicable.