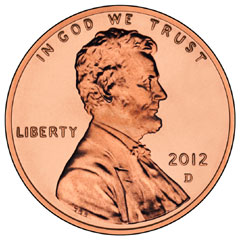 President Obama’s recently submitted 2014 Budget proposes legislation which would provide the Secretary of the Treasury with the authority to change the composition of coins to more cost effective materials. Similar proposals have also been made in previous budgets.

According to the latest figures, it currently costs the United States Mint 2.00 cents to produce and distribute each cent and 10.09 cents to produce and distribute each nickel. Since 2006, the two lowest denominations have cost more than their respective face values to produce, generating cumulative losses of $469 million. However, overall circulating coinage production has continued to generate positive seigniorage since the losses on the cent and nickel are more than offset by the higher denominations.

The authority to alter compositions for circulating coins currently rests with Congress. In 2010, a law was enacted which provided the Treasury of the Secretary with the authority to perform research and development activities related to coin composition with the requirement for a biannual report with findings and recommendations. After two years of research, a report was delivered to Congress which stated that additional work was necessary before any specific recommendations could be made.

While the United States has continued to study the issue, the Canadian government acted swiftly to eliminate the cent in their country. The Canadian cent, which reportedly cost 1.5 cents to produce, ended production in April 2012 and ceased distribution on February 4, 2013.

The 2014 Budget also proposes legislation which would grant the United States Mint and Bureau of Engraving and Printing increased flexibility to share services and engage in cooperation actions. This would have the intended impact of gaining efficiency savings by eliminating unnecessary duplication.