Those of us who submit to the major coin grading services, NGC and PCGS, are often disappointed because we would like to think our coins are better than they often are. That’s the reason why we have slabbing companies.

Collectors (first party) typically think their coins are in better condition than do buyers (second party); so we rely on third-party graders to give us their best objective estimates. In that role they become numismatic referees. Like those in the sports world, their reputations are based on consistency.

Yes, coin grading is a subjective exercise–to an extent. Grades from top companies shouldn’t be off by more than a point or two.

Every now and then, though, collectors get grades that seem overly subjective, to the extent that they want to do something about it.

Both of the top grading services have outlets for that. If you disagree with a grade, you can resubmit the coin and pay the appropriate fees. I usually send the coin to the rival grading service. This way, I get an education for my fees, ascertaining the fine points of slightly different grading practices. 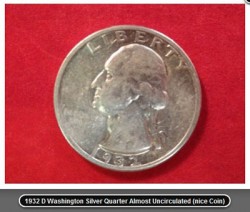 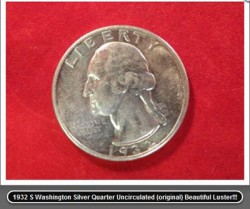 NGC graded both of them XF45. Click to expand any of the photos. 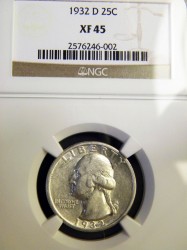 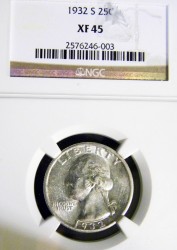 I was disappointed in the grades, but more so in that both coins received the same designation when the 1932-S was clearly the better coin. While both had luster, and the 32-S had more, the breast feathers of the 32-S were distinct whereas the feathers on the 32-D were fainter and more worn.

In making decisions whether to resubmit a coin, I usually rely on PCGS Photograde Online. This is an easy to access free resource with quality pictures.

That’s a pretty bold statement. NGC and PCGS are top-rated because of consistency. Seldom does one company give a higher grade than its rival, although PCGS has done that once out of a dozen or more of my submissions. (It does happen.)

I’m writing this post at on April 6, 2012, the day that PCGS received my crossover submission. Of course both companies do not know Coin Update will publish this post (but NOT until PCGS reports its grades).

By the way, I wrote “ANY” on my PCGS submission form rather than “CROSSOVER” because I wanted to give the graders as much leeway as possible in helping determine who was right–the Proxibid auctioneer (first party), your columnist (second party) or NGC (third party).

That makes PCGS the referee.

Have you ever sent NGC coins to PCGS (or vice versa) because you were disappointed with a grade? If so, tell us what happened.

We’ll tell you what happened with these coins as soon as we receive the PCGS grades.