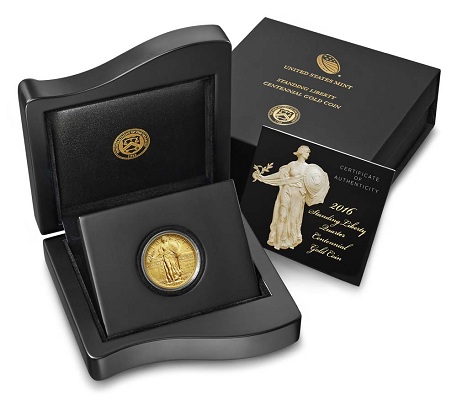 The U.S. Mint is now taking orders for the 2016 Standing Liberty Quarter Centennial Gold Coin, the second of three issues released this year to celebrate the 100th anniversary of the introduction of the Mercury (or Winged Liberty) dime, the Standing Liberty quarter, and the Walking Liberty half dollar into circulation. The gold quarter currently retails for $485 and has a mintage limited to 100,000 pieces. The Mint has also established an order limit of one coin per household.

The Standing Liberty design was created by Hermon A. MacNeil. The obverse image features Liberty standing with a shield and an olive branch before a wall marked with 13 stars. IN GOD WE TRVST appears across the middle of the design, and the inscriptions AU 24 K, 1/4 OZ, and 2016 have also been included. To the left of Liberty’s foot is the West Point Mint’s “W” mint mark, while “M,” the first letter of the designer’s last name, is placed on the right.

The reverse design bears the image of an eagle in flight with 13 stars placed along the rim. The inscriptions UNITED STATES OF AMERICA, E PLVRIBVS VNVM, and QUARTER DOLLAR occupy the field around the eagle.

Like the Mercury dime released earlier this year, the new coin is composed of 99.99% gold and features a business-strike finish. It weighs 7.776  grams (1/4 oz.), measures 22 mm in diameter, and is packaged in a custom hardwood case with a certificate of authenticity.

For more information, please visit the Web site of the U.S. Mint. The Mint’s full pricing chart for this year’s Centennial gold coins can be viewed here.