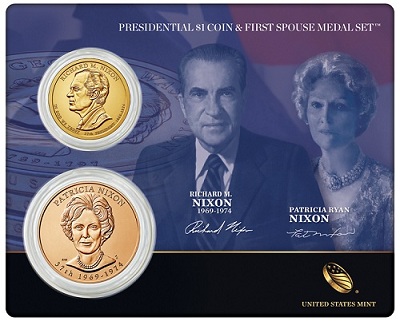 The coin and medal come affixed to a dense plastic card featuring portraits of the President and the First Lady, with historical information printed on the back of the card. A certificate of authenticity is also included. There are no listed production limits for this item, but most of the recent sets in this series have seen final sales totals of around 10,000 units or less.

The Richard Nixon Presidential dollar features an image of Nixon on its obverse, with RICHARD M. NIXON inscribed along the top of the design and IN GOD WE TRUST, 37th PRESIDENT, and 1969-1974 displayed at the bottom. The reverse bears a design common to all Presidential $1 coins; it includes a depiction of the Statue of Liberty beside the coin’s $1 denomination, with UNITED STATES OF AMERICA curving along the rim. Don Everhart designed and engraved both the obverse and the reverse of the coin.

The bronze medal is a replica of the Patricia Nixon First Spouse Gold Coins, released on February 18. Images of the coins are available here, along with information on the obverse and reverse designs.

The Mint has also announced that the Richard Nixon Foundation will celebrate the release of both this set and the Patricia Nixon First Spouse Gold Coins at the Richard Nixon Presidential Library and Museum in Yorba Linda, California, on March 16, Patricia Nixon’s birthday. The event will begin at 10 a.m. and is free and open to the public. Attendees will include United States Mint Chief Council Jean Gentry, Richard Nixon Foundation President Bill Baribault, and Edward Nixon, the President’s brother. A variety of this year’s U.S. Mint Richard and Patricia Nixon products will available for purchase as well.