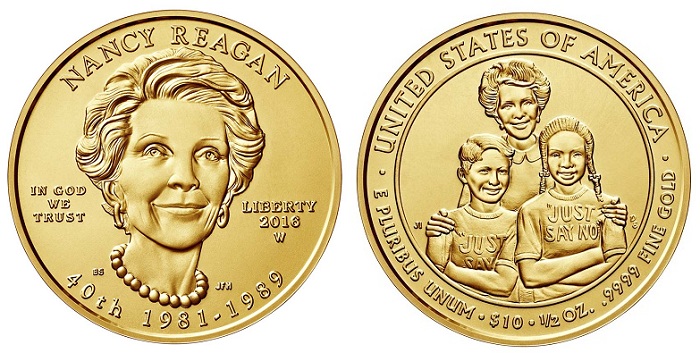 The U.S. Mint is now taking orders for the 2016 Nancy Reagan First Spouse Gold Proof and Uncirculated Coins, the final issues in the First Spouse Gold Coins program that debuted in 2007 in tandem with the Presidential dollars series.

Composed of 1/2-ounce of 99.99% gold, the Proof and Uncirculated versions of the coin share a combined mintage limit of 15,000 pieces and are currently priced at $865 and $845, respectively. The 15,000-piece mintage limit is higher than the 10,000-unit ceiling put in place for the Nixon and Ford coins issued earlier this year. 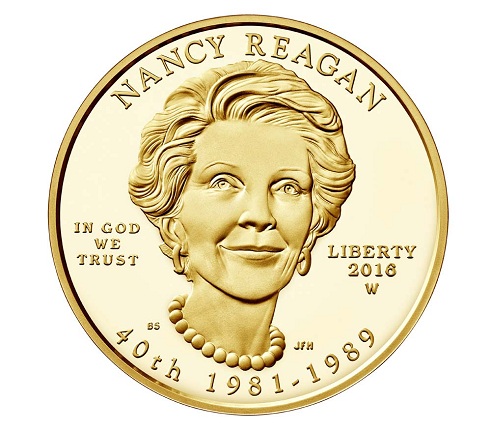 The obverse of the Nancy Reagan First Spouse coins was designed by Benjamin Sowards and sculpted by Joseph Menna. It features a portrait of Mrs. Reagan, with the inscriptions NANCY REAGAN, IN GOD WE TRUST, LIBERTY, 2016, 40th, and 1981-1989. The West Point Mint’s “W” mint mark is also included beneath the year of issue. The reverse image features the former first lady with two children wearing shirts associated with her “Just Say No” campaign, which urged young people to avoid drug use. Inscribed on this side of the coins are UNITED STATES OF AMERICA, E PLURIBUS UNUM, $10, 1/2 OZ., and .9999 FINE GOLD.

Each coin comes presented in a hardwood presentation case with a certificate of authenticity. Prices may be adjusted in accordance with the changing market value of gold, per the Mint’s pricing chart for products containing precious metals. The current prices will stay in effect as long as the value of an ounce of gold (currently $1,331.75) stays between $1,300.00 and $1,349.99.