The U.S. Mint is now taking orders for the 2016 Gerald Ford One Dollar Coin Cover, which is available for $19.95 and has been assigned a product limit of 20,000 units. Sometimes referred to as “first day” coin covers, items in this series contain two Presidential dollars respectively manufactured on the first day of the coins’ production at the Philadelphia and Denver Mint facilities.

The coins are contained in a display card that showcases their obverses and reverses. The outer cover bears a portrait of President Ford, the dates of the coins’ production, the issue date of the coin cover, and a Red, White, and Blue (Forever) stamp. 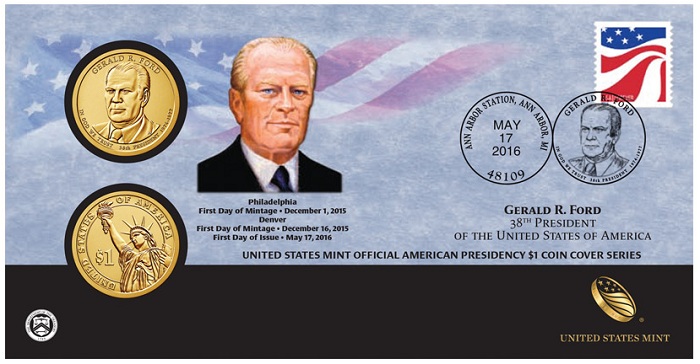 The Gerald Ford Presidential dollar features an image of Ford on its obverse, with GERALD R. FORD inscribed along the top of the design and IN GOD WE TRUST, 38th PRESIDENT, and 1974-1977 displayed at the bottom. Phebe Hemphill served as the designer and engraver.

The reverse bears a design common to all Presidential $1 coins; it was designed and engraved by Don Everhart and includes a depiction of the Statue of Liberty beside the coin’s $1 denomination, with UNITED STATES OF AMERICA curving along the rim. 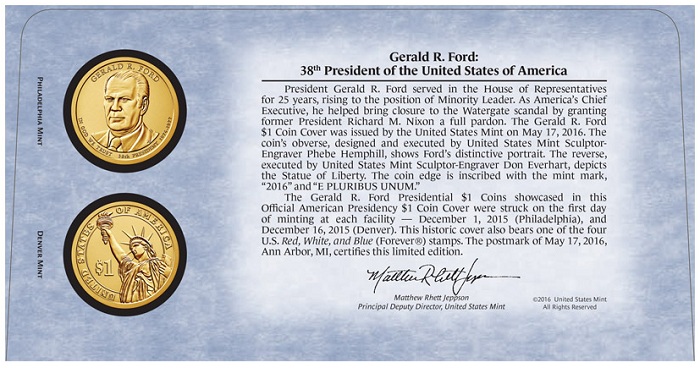 The Ford coin cover will be the 38th release in this product series, which launched in 2007. The 39th and final cover will feature Ronald Reagan and is due for release later this year.

Sales of Presidential dollar coin covers have remained relatively steady over the years. 2015’s Truman and Eisenhower issues recently sold out with totals close to their 15,000-unit mintage limits and it’s likely the Nixon and Ford sets will have similar success despite having their limits pushed to 20,000.

One anomaly worth considering is the 2015 John F. Kennedy issue, which was given the unusually high ceiling of 35,000 units and has currently sold 21,480. It looks likely that the upcoming Reagan coin cover will also be given a higher-than-normal product limit, but we’ll have to see how the Mint adjusts its expectations now that the Kennedy set seems unlikely to climb to 35,000 units any time soon.