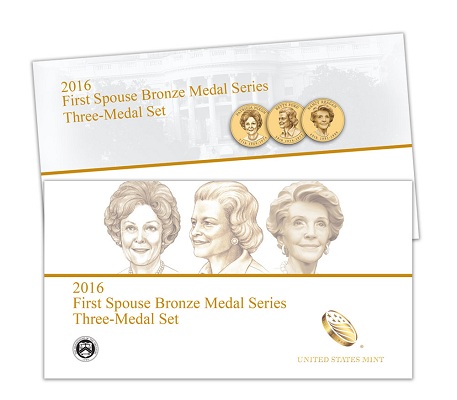 The U.S. Mint is now taking orders for the 2016 First Spouse Bronze Medal Series, which includes the three First Spouse medals previously issued this year in this year’s Presidential Coin & Medal sets. Priced at $16.95, this item has not been assigned a mintage limit or a product limit.

The three presidential spouses honored in 2016 as part of the Mint’s First Spouse program are Patricia Nixon, Betty Ford, and Nancy Reagan. The bronze medals bear the same designs as the First Spouse gold coins issued earlier this year, which feature a portrait of a First Lady on the obverse and a reverse image that references an aspect of her legacy.

Each medal has a diameter of 1.31 inches and was minted in Philadelphia. The set is issued in Mylar packaging that is placed in a folded card with product information and a custom-made outer envelope.

The obverse of the Patricia Nixon medal was designed by Richard Masters and sculpted by Don Everhart. It features an image of Mrs. Nixon with the inscriptions PATRICIA NIXON, 37th, and 1969-1974.

The reverse, designed by Richard Masters and sculpted by Jim Licaretz, carries a depiction of figures holding hands around the world, referencing the First Lady’s efforts to promote volunteerism. 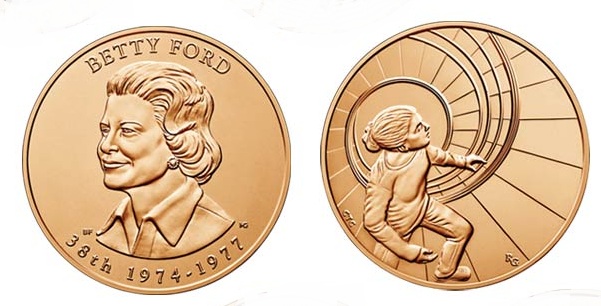 The obverse of the Betty Ford medal bears an image of Mrs. Ford with the inscriptions BETTY FORD, 38th, and the dates of her time in the White House, 1974-1977. This side of the coin was designed by Barbara Fox and sculpted by Michael Gaudioso.

The reverse, designed by Chris Costello and sculpted by Renata Gordon, features an image of a young woman climbing a staircase, symbolizing Mrs. Ford’s “openness and advocacy regarding addiction, breast cancer awareness, and the rights of women,” according to a press release. 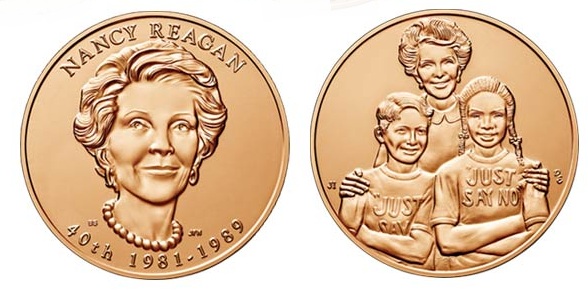 The obverse of the Nancy Reagan First Spouse medal was designed by Benjamin Sowards and sculpted by Joseph Menna. It features a portrait of Mrs. Reagan, with the inscriptions NANCY REAGAN, 40th, and 1981-1989.

The reverse image features the former first lady with two children wearing shirts associated with her “Just Say No” campaign, which urged young people to avoid drug use.

The First Spouse program was launched in tandem with the Presidential dollars series in 2007 and will conclude after this year. For more information on the 2016 First Spouse Medal Series, please visit the U.S. Mint’s Web site.