The U.S. Mint is now accepting orders for the 2016 Cumberland Gap National Historical Park 5 oz. Silver Uncirculated Coin, which is composed of five ounces of 99.9% silver and is available for $149.95. There are no household order limits in place for this item.

All America the Beautiful 5 oz. Uncirculated coins carry the Philadelphia Mint’s “P” mint mark, unlike the bullion versions of these issues, which have no mint mark. They measure three inches in diameter and are .165 inches thick; each piece comes enclosed in a protective capsule that allows for easy viewing of both the obverse and reverse. A certificate of authenticity is also included in the packaging.

Like the previous issue in this series, the Cumberland Gap 5 oz. Uncirculated coin has been given a 30,000-piece mintage limit, which is part of an larger 150,000-unit limit established by the Mint for both Uncirculated and bullion strikes. Sales of the bullion version of this coin currently stand at 64,000 units and will be capped at 120,000 to keep the overall total within the 150,000-piece limit. In the unlikely event that the Mint decides to sell more than 120,000 bullion pieces, however, it reserves the right to dip into the Uncirculated allocation as long as the total for both issues does not exceed 150,000. 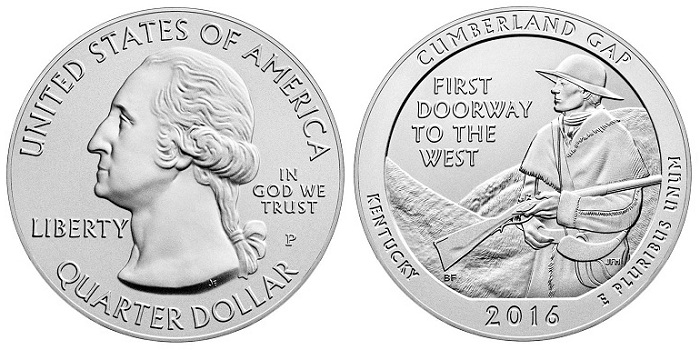 The Cumberland Gap quarter on which the five-ounce issue is based was launched into circulation on April 11. Its reverse design was created by Barbara Fox and engraved by Joseph Menna. The image depicts a frontiersman looking west over the Cumberland Gap, which was often crossed by pioneers on their way to Western Kentucky and Tennessee. Inscribed along the rim are CUMBERLAND GAP, KENTUCKY, E PLURIBUS UNUM, and 2016, with FIRST DOORWAY TO THE WEST included in the field above the mountains.

The obverse includes John Flanagan’s 1932 portrait of George Washington, along with the inscriptions UNITED STATES OF AMERICA, LIBERTY, IN GOD WE TRUST, QUARTER DOLLAR, and a “P” mint mark.

The Cumberland Gap National Historical Park design is the 32nd issue in the America the Beautiful series. The previous 5 oz. Uncirculated issue in this series features Shawnee National Forest and has sold 16,484 units. The Homestead National Monument coin, released in March of last year, was finally declared “sold out” by the Mint last month after selling 21,286 pieces. Final mintages for most of the ATB 5 oz. silver Uncirculated and bullion coins can be found here.