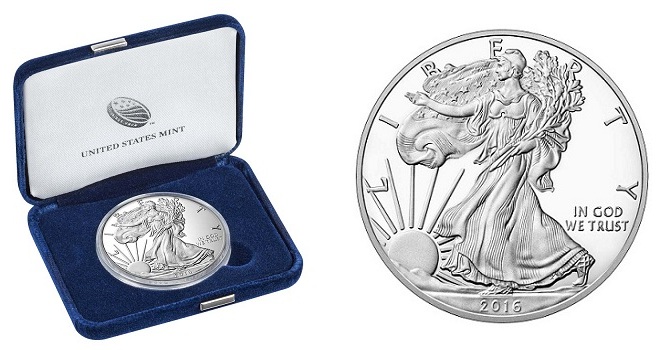 The U.S. Mint is now accepting orders for the 2016 American Eagle One-Ounce Silver Proof Coin, which is an anniversary issue celebrating 30 years of the American Eagle bullion coin program, first launched in 1986. The 2016 Proof Silver Eagle is composed of an ounce of 99.9% silver and is available for $53.95.

American Eagle one-ounce silver Proof and Uncirculated coins are typically released in January, but the Mint has taken longer with the 2016 pieces. This is in part due to legislation signed late last year requiring that the edges of the new 30th anniversary coins be smooth with incused lettering rather than reeded like previous collector versions of Silver Eagles. 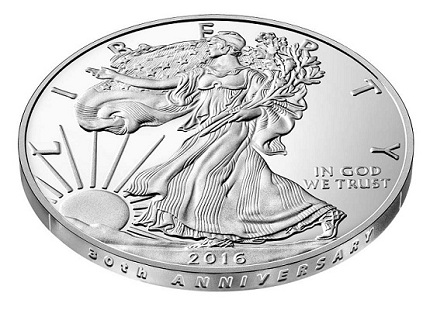 The lettering on the coin’s edge reads 30th ANNIVERSARY. Each piece measures 40.60 mm in diameter and is 3.05 mm thick.

As in previous years, the 2016 American Silver Eagle obverse features a depiction of Liberty mid-stride that was originally created by Adolph A. Weinman for inclusion on the 1916 Walking Liberty half dollar. Liberty carries an American flag as well as branches of laurel and oak. Inscribed along the rim of the coin are LIBERTY, IN GOD WE TRUST, and 2016.

The reverse carries John Mercanti’s heraldic eagle with thirteen stars. Inscribed in the field and along the rim of the coin are UNITED STATES OF AMERICA, 1 OZ. FINE SILVER~ONE DOLLAR, and the West Point Mint’s “W” mint mark.

Each coin comes packaged in a velvet blue case with a certificate of authenticity. The Mint has not yet announced when the Uncirculated version of this coin will debut, but it has indicated that collector versions of 2016 Silver Eagles will be available into 2017.