United States gold pattern coins: these glittering rarities, of which little had been published, were first introduced as a group to the numismatic world in 1975, when David Akers published his ground-breaking United States Gold Patterns. Akers, then with Paramount International Coin Corporation, had been involved in the 1973 purchase of the collection of gold pattern coins formed by John E. Wilkison over a period of 30 years. Of the 51 gold patterns listed in Akers’s book, Wilkison owned more than 60 percent, a feat unmatched before or since. Subsequent to the publication of Akers’s book, Paramount sold the Wilkison Collection; the coins are now widely dispersed.

The following are some of the dozens of fascinating gold patterns that collectors find especially notable and appealing:

Longacre’s 1849 Hand-Engraved Gold Dollars: In 1849, the idea of a gold dollar was resurrected due to an influx of large quantities of gold from California. Late in January, Congressman James McKay of North Carolina introduced legislation authorizing the coinage of gold dollars. On January 27, a letter in the Washington Union proposed an unusual design for the new coin: same size as a silver five-cent piece (or half dime, as it was known then), with a square hole in the center, ONE DOLLAR and 1849 (or whatever year it may be coined in) on one side, and a wreath and UNITED STATES OF AMERICA on the other. According to the letter writer, “The object of the square hole is to make the coin thicker and broader, and to enable every person to ascertain the difference at any time, either night or day, between the gold dollar and a five cent piece.” 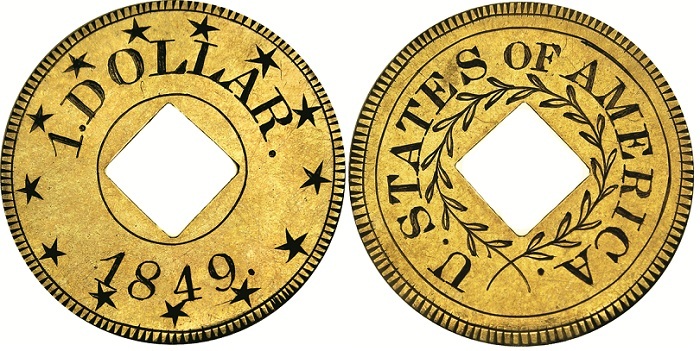 In the haste to supply samples for Congress, James Barton Longacre, then the chief engraver of the Mint, was forced to hand-engrave the coins based on the proposed designs. The result was a small number of patterns, some in gold, some in gold-plated silver, each of which is slightly different from the other. The somewhat crude handiwork of these coins is far beneath Longacre’s talents as an engraver, but that is more a reflection of expediency rather than technical merits. The outer border is irregularly spaced; the size of the lettering varies; the circles are imperfect, and the stars are misshapen. Yet, each coin has an endearing character that makes them some of the most attractive and desirable of all gold patterns.

The 1849 Double Eagle: The gold dollar was not the only coin to be introduced in 1849. If the new dollar was to be the smallest gold coin, then why not a double eagle as the largest U.S. gold coin? Certainly, there was gold aplenty in 1849, thanks to the recent discovery in California. Besides, a $20 gold piece would be quite helpful in commercial and banking transactions.

The new double eagle denomination was authorized by the Act of March 3, 1849, after which James Longacre set to work on dies for the new coin. He completed the reverse die in June, but he was unable to complete the obverse until December 22. Upon striking a few pieces, it was discovered that the relief of the coin was too high and that the coins could not be mass-produced. Because time had run out, no further attempts were made to produce 1849 double eagles. This begets the question, “If Longacre had fashioned the dies properly, and made them sooner, how many more 1849 double eagles would have been produced?” Except for this cruel twist of fate, the 1849 double eagle might have been a circulation issue instead of a pattern!

Teddy’s Coin (The 1907 Indian Head $20): In 1907, Augustus Saint-Gaudens was deep into his task of redesigning the $10 and $20 gold pieces. At first, his attention focused on the $20 gold piece, for which he prepared a design with a full-length figure of Liberty bearing a torch and striding towards the viewer. Simultaneously, Saint-Gaudens was working on a new design for the one-cent piece, featuring a head of Liberty wearing an Indian headdress. The headdress was then-president Theodore Roosevelt’s suggestion and Saint-Gaudens liked it so much that he proposed using it on the $20 gold piece in place of his Liberty Walking design. Roosevelt agreed and a single example in gold was made of the Indian Head $20 gold piece. However, Saint-Gaudens discovered that most people favored the Liberty Walking design over the Indian Head, and he dropped all efforts to promote the latter (which was later used on the $10 gold piece).

The unique Indian Head $20 eventually went through the estate of Charles Barber (chief engraver of the U.S. Mint) into such notable collections as those of Waldo Newcomer, F.C.C. Boyd, King Farouk of Egypt, R.E. “Ted” Naftzger, and J.E. Wilkison.

The 1877 $50 Half Unions: The two $50 half union pattern designs, each unique, have a shared story that has been a part of coin lore since the early 1900s. Originally, the pieces were owned by former mint superintendent Colonel A. Louden Snowden, who obtained them from the Mint circa 1877 and, in fact, saved them from the melting pot. William H. Woodin purchased the half union patterns from John Haseltine and Steven Nagy for $10,000 each in 1909. When the collecting community learned of Woodin’s purchase, an uproar ensued; ultimately, the U.S. government intervened and, in the end, the two coins were returned to the Mint. Subsequently, they were placed in the Mint Collection; today they reside in the Smithsonian Institution. 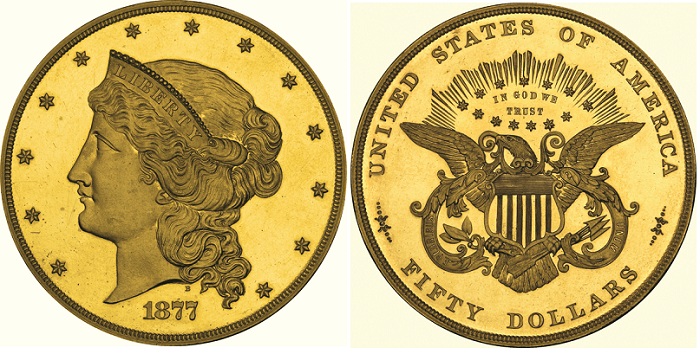 The circumstances behind their return had been shrouded in mystery, but several letters, formerly a part of the John J. Ford Library, establish that Colonel Snowden was, in fact, the owner of the two pieces.

The story goes that Woodin received several crates of pattern pieces as compensation; the patterns apparently came from both Colonel Snowden’s personal collection and John Haseltine’s holdings, the latter having his father-in-law William Idler’s collection at hand. Among the pieces believed to be a part of this settlement are the gold patterns listed in the Encyclopedia of U.S. Gold Coins, 1795–1933 dated 1872, 1874, and 1875.