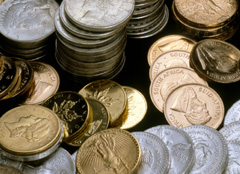 Compared to a year ago, the price of gold is up more than 26% while silver has soared 100%!

These results blow away the return on US stocks over the past decade, with the Dow Jones Industrial Average up about 3% and the NASDAQ and Standard and Poors Index actually lower than they were ten years ago.

In my judgment, the answer is “No, it is not too late!”

Gold and silver prices peaked in January 1980, with gold reaching $850 and silver topping $50. Obviously, the gold spot price today is much higher than at the 1980 peak. However, when you factor in the effects of inflation over the past 31 years, the price of gold now would need to be well over $2,200 dollars to match the 1980 peak, while silver’s price would have to exceed $84. Even at today’s high prices, gold and silver are trading at a fraction of their inflation-adjusted 1980 peak levels.

There tend to be three waves of buying assets that are rising in price. First you have the buyers who got in on the ground floor, when prices were low because of a non-existent or poor track record or, with commodities, ample supplies compared to demand. These buyers did their research and perhaps took a calculated risk to make their purchases. At this stage, there are very few analysts following or commenting on the particular asset because it may represent too high of a risk of a loss.

The second wave of buyers are those whose interest is captured by a rising price and a developing track record. Those who have purchased gold and silver in the past few years up to today should consider themselves part of this group. The number of buyers grows because the rising price charts draw attention. As more buyers feel comfortable owning the asset, this broader base of support also minimizes the risk of a major price decline. During this wave, more analysts start following the asset, of which some will downplay the future prospects for appreciation. As an example, a widely quoted, so-called “expert” on the gold market has been calling for its price to plummet ever since gold reached $700 a few years ago.

During this second wave of demand, there will be many people who consider buying the asset but simply never seem to get around to it. Some listen to the naysayers. Over the years, I have heard a lot of different excuses from people on why they didn’t buy gold and silver once they realized the value and safe haven benefits that precious metals offer. They knew better, but just didn’t take action.

The third wave of buyers jump in when prices have risen so far that the asset captures the general public’s fancy. A number of people who held off buying during the second wave now take extreme efforts to get into the market before prices go to the moon. People standing in waiting lines start talking about the asset. Barbers, taxi drivers, hairdressers, and shoe shiners all plug the asset as a “sure thing” worth purchasing. Buyers at this stage tend to do much less due diligence in considering whether to buy, almost panicking to make their purchases right away.

This is exactly the time when due diligence is needed. When demand for an asset has reached the stage where almost every potential buyer has made their purchase, that is when prices reach their peak. In other words, that is the time to be a seller instead of a buyer.

The staff at my company observed this frenzied buying behavior in January 1980 as gold and silver prices peaked. What we are seeing in customer demeanor today is a long way from the public behavior of 31 years ago.

Therefore, just from a buyer psychology perspective, gold and silver prices have a long way to rise. There are also a huge number of supply, demand, and inventory reasons to expect much higher prices in the coming months and years, which I have discussed in other commentaries.

It doesn’t matter how much lower prices were in years past. What you need to factor into your buying decision is where prices are headed in the future. I believe I am being conservative in expecting gold and silver prices to at least double or triple in the next few years. That is why, in my judgment, I don’t think it is too late to buy gold and silver at today’s prices.