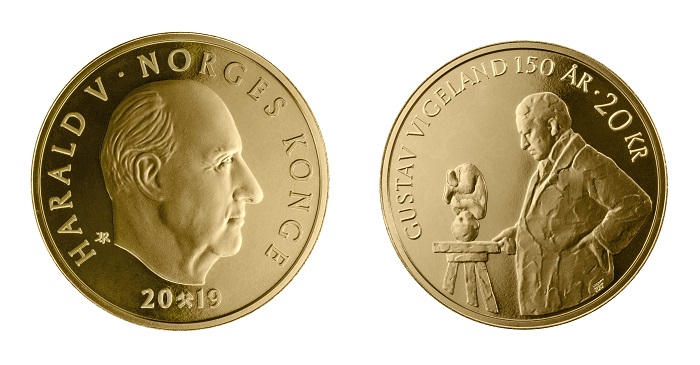 The Bank of Norway has released (10th April) new 20-kroner circulation type coins in remembrance of the 150th anniversary of the birth of prominent Norwegian artist Gustav Vigeland (1869–1943). The artist, and his work, are especially known and remembered for having created an outdoor sculpture complex in Frogner Park, Oslo. Having attended art schools in Oslo and Copenhagen, Vigeland spent several months in Paris in 1893. While there, he visited the studio of Auguste Rodin, and it is this sculptor’s influence which can be noticeably seen in a more detailed, but emotional expression of Vigeland’s early work. His first sculptures were mostly true-to-life portrait busts and reliefs, but by 1900, Vigeland was noticeably influenced by medieval sculpture and he consequently adopted a more simple and stylised approach. This later style was essentially what became his trademark.

In 1924, Vigeland embarked upon the project that would occupy him for the rest of his career which would consist of a large series of monumental figures. Vigeland designed more than 200 individual sculptural projects for Frogner Park, a public space located in the municipality of the same name. Known as “The Vigeland Installation,” the project included an entrance way, a bridge, a fountain, a circular staircase, a mosaic labyrinth, and a stone forest composed of carved figures. A central monolith, carved from a single column of solid granite reaches 57 feet (17 metres) high and consisting of 121 figures surrounded by 36 major groupings; all dealing with the various periods in the cycle of life from birth, childhood, adolescence, maturity, old age, and death.

Vigeland lived and worked at his studio on Nobels Gate until his death in 1943. His ashes are still preserved there in the belfry of the building. According to an agreement with the City of Oslo, the building itself became the Vigeland Museum, which was opened in 1947. 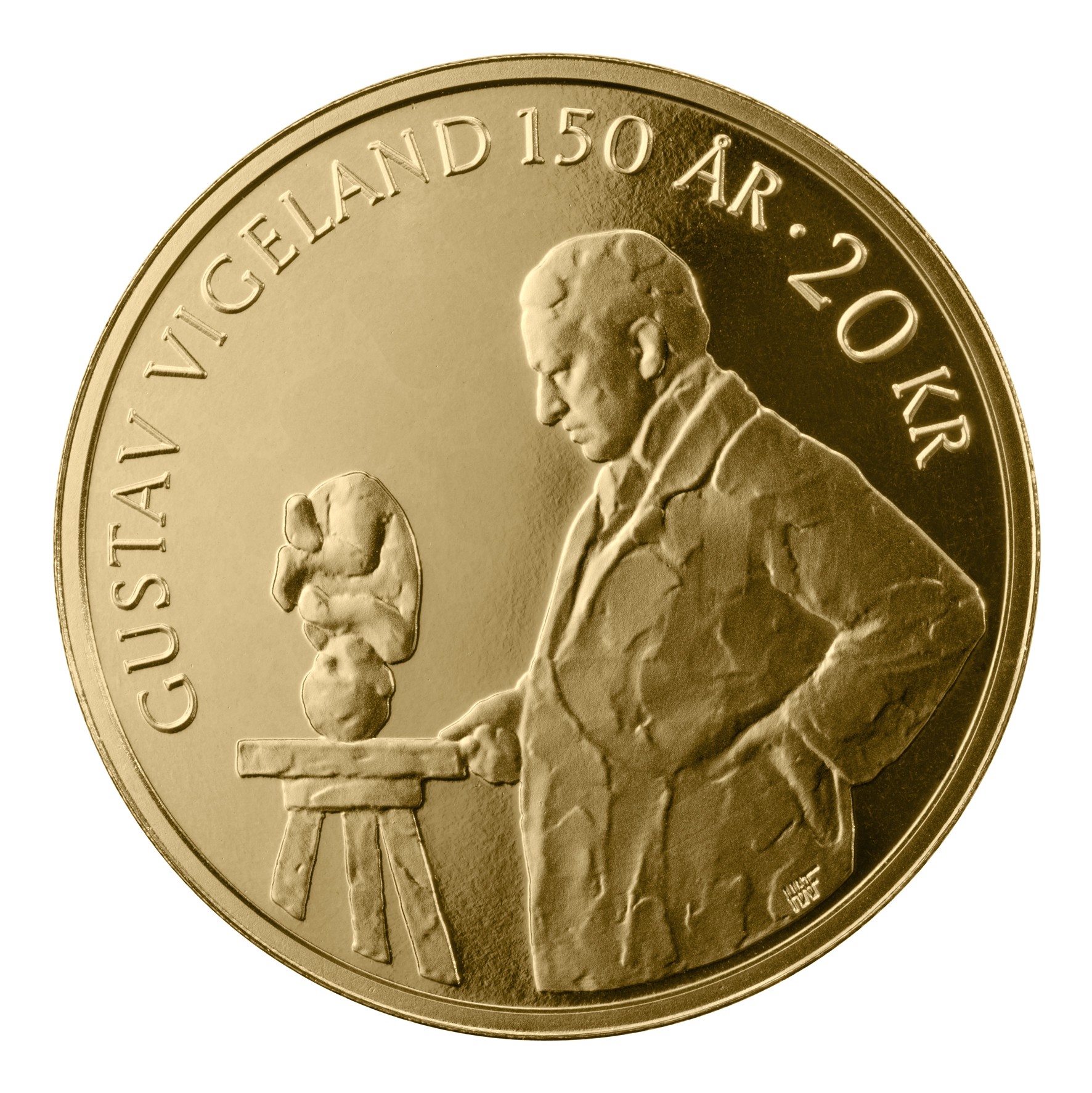 The coins are produced by the Mint of Norway at their facilities in Kongsberg and are designed by Håkon Anton Fagerås (reverse) and Ingrid Austlid Rise (obverse). The reverse side shows the artist Vigeland by his stand while contemplating the sculpture The Foetus during modelling. The inscription GUSTAV VIGELAND 150 ÅR 20 KR is placed above the primary design along the rim. 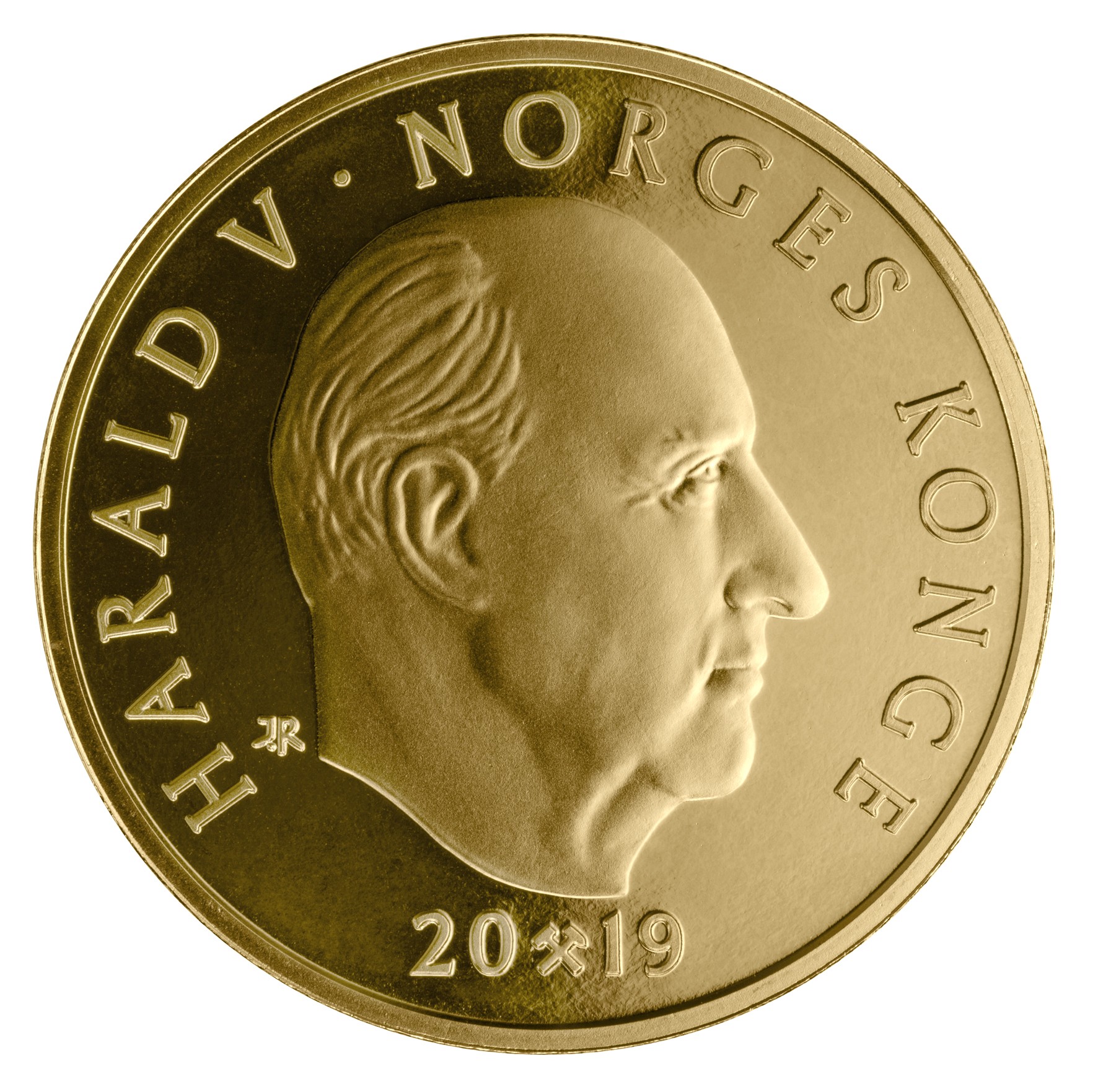 The obverse side includes an effigy of HM King Harald V facing right, which is created by Ingrid Austlid Rise, designer at the Mint of Norway.

The launch of the commemorative coins took place in conjunction with the opening of the Vigeland 150th Anniversary exhibition at Oslo City Hall on the 10th April. The coins are available from the usual points of distribution, including commercial banks and post offices, for their face value. The standard-design 20-krone coins will not be issued in 2019. A collector’s version has not yet been announced by the Bank of Norway. For additional information about commemorative coins issued by the bank, please click here.