The Royal Canadian Mint has unveiled a coin to honor the country’s newest Nobel Laureate, Canadian literary icon Alice Munro who received the 2013 Nobel Prize in Literature. In 1986, Alice Munro became the first recipient of an annual Writers’ Trust award in recognition of a Canadian writer’s exceptional body of work. Nearly three decades later, Ms. Munro’s work was lauded throughout the world when she was presented with the Nobel Prize for her work as “master of the contemporary short story”

Born in Wingham, Ontario, Munro began writing as a teenager, publishing her first story, “The Dimensions of a Shadow,” in 1950 while studying English and journalism at the University of Western Ontario. In 1951, she left the university, where she had been majoring in English since 1949, to marry fellow student James Munro.

In 1968, Munro’s highly acclaimed first collection of stories, Dance of the Happy Shades won the Governor General’s Award, Canada’s highest literary prize, that success was followed by Lives of Girls and Women in 1971.

Munro’s stories explore human complexities in an uncomplicated prose style. Her writing has established her as one of our greatest contemporary writers of fiction, and has been described as the “Canadian Chekhov.” 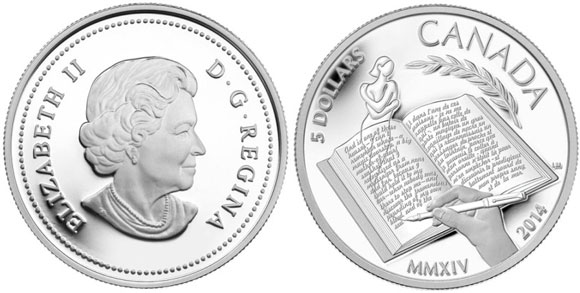 The coin, designed by Canadian artist Laurie McGaw – features an ethereal female figure emerging from a pen as a representation of one of the many central characters from Alice Munro’s beloved short stories. An image of a hand is seen resting against an open book, whose pages are inscribed with a passage from Munro’s The View from Castle Rock which reads: “And in one of these houses – I can’t remember whose – a magic doorstop, a big mother-of-pearl seashell that I recognized as a messenger from near and far, because I could hold it to my ear – when nobody was there to stop me – and discover the tremendous pounding of my own blood, and of the sea.” Above it, a laurel branch celebrates Munro’s distinction as the first Canadian woman to win a Nobel Prize in Literature.

The obverse features a portrait unique and distinct to the coins of Canada which was designed by Susanna Blunt and in use since 2003.

The coin was unveiled today at the Greater Victoria Public Library in British Columbia by Royal Canadian Mint CEO and President Ian Bennett who, as part of the unveiling announced that the Royal Canadian Mint is proudly donating $10,000 to the Writers’ Trust of Canada. Also present at the ceremonies was Mary Osborne, Executive Director of the  Writers’ Trust of Canada. The coin is presented in a custom case along with a certificate of authenticity.