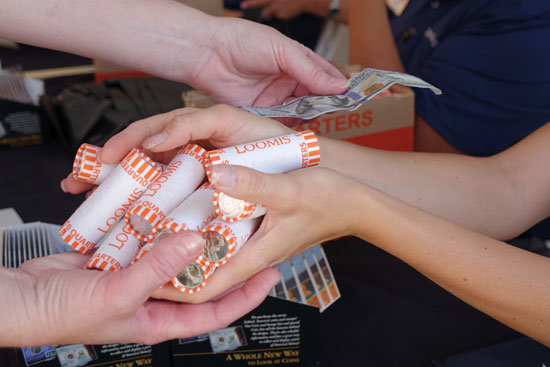 National Coin Week, April 19-25, 2020, emphasizes that money is history you can hold in your hands

Common, everyday pocket change at home can be used to help educate children whether their schools are temporarily closed or not, according to the nonprofit American Numismatic Association (ANA). The 25,000-member organization will mark the 97th annual National Coin Week, April 19-25, 2020.

“Money is history you can hold in your hands. The designs, denominations, and metallic content of coins tell us a great deal about civilizations, past and present, such as famous and not-so-famous political and historical figures, important events, and landmarks,” stated National Coin Week coordinator Andy Dickes.

“Former presidents and other designs depicted on coin denominations — the Abraham Lincoln cent, Thomas Jefferson nickel, Franklin D. Roosevelt dime, and George Washington quarter-dollar — can be useful educational tools to teach school-age children about history, art, geography, and even math. Virtually any coins in pockets, purses, and socks drawers can be handy teaching tools,” he explained.

National Coin Week focuses attention on the historical, cultural, artistic and economic importance of money as well as the enjoyment of coin and paper money collecting.

The theme of this year’s National Coin Week is “Remarkable Women: Catalysts for Change,” which is inspired by the 100th anniversary of the 19th Amendment to the U.S. Constitution in 1920 granting women the right to vote, as well as celebrating the many contributions of women in society and numismatics.

Several historical women have been depicted on United States money including President Washington’s wife, Martha, on $1 notes issued in the 1880s and 1890s; suffragette Susan B. Anthony on $1 denomination coins from 1979 to 1981; and Native American Sacagawea, who assisted the 1804-1806 Lewis and Clark Expedition, on golden dollar coins since 2000.

The American Numismatic Association is a congressionally chartered, non-profit educational organization dedicated to encouraging the study and collection of coins and related items. The ANA helps its 25,000 members and the public discover and explore the world of money through its vast array of instructional and outreach programs, as well as its museum, library, publications, and conventions. For more information, call 719-632-2646 or visit here.