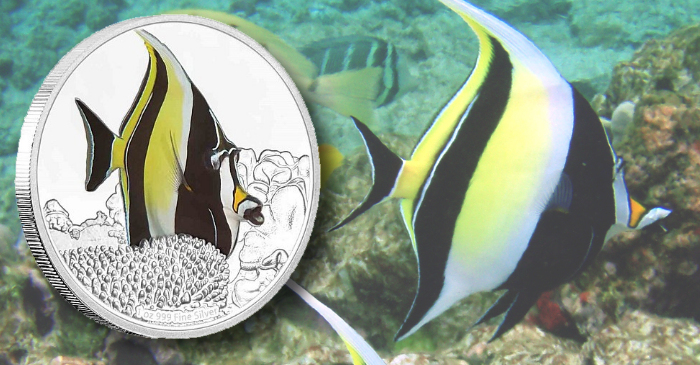 The treasury of the South Pacific Island Nation of Niue has released (3rd December) their third coin that is part of an ongoing series entitled “Reef Fish,” which features some of the marine life prevalent in and around the Pacific Ocean. The third coin highlights the attractive and timid Moorish idol, a very familiar occupant in many a home aquarium, as they are greatly admired for their sleek and colourful markings of black, white, and yellow.

The Moorish idol (Zanclus cornutus) received its name from the Moors in Africa, who believed the fish brought happiness and contentment. It is also commonly known in Hawaii as “Kihikihi,” which means “curves,” “corners,” or “zigzags,” referring to its shape and colour pattern. These fish, with a maximum length of 23 centremetres (nine inches) and a height of 21 centremetres (8.2 inches), are the only member of the family Zanclidae, and are a very close relative of the tangs (surgeonfish). One of the most widespread fish, it can be found throughout the Indian Ocean, Red Sea, and all of the tropical Pacific.

Perhaps the most graceful of all marine fish, for many hobbyists, it is also one of the most difficult fish to keep because it is so hard to feed and many agree, for this reason alone, that they are better admired in the ocean than in a home aquarium. Moorish idols that have adapted to feeding in captivity can be fed on a meaty diet of chopped mysis shrimp, brine shrimp, clam, and squid. For aquarium-hobbyists living in North America, specimens caught in Hawaii and Mexico are often recommended over specimens caught in other areas, due to the short transportation distances involved.

Moorish idols are a relatively peaceful species and can be housed with most other peaceful species of fish. Although certain aquarists recommend raising Moorish idols as solitary specimens, they are best kept in mated pairs or groups of four to six. They are, however, a fairly large and active species and should be provided with adequate tank space, especially when kept in large groups. Having said all that, it is virtually impossible to breed Moorish idols in captivity. 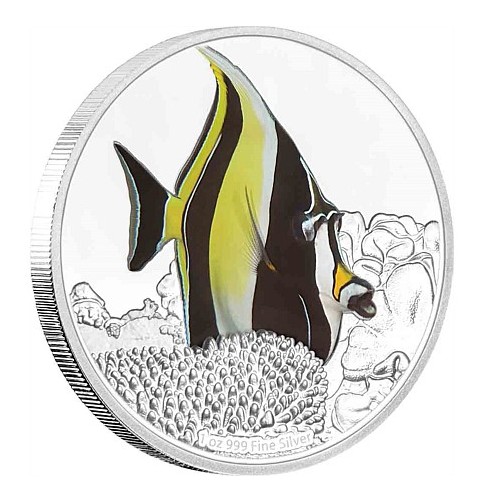 The coins are produced by the New Zealand Mint at their facilities in Auckland on behalf of the treasury of Niue. The reverse side of the silver coin artistically depicts the coloured Moorish idol amongst engraved coral in its native reef habitat. The design also utilises an ultra-gloss effect to give the Moorish idol a unique “wet” look. 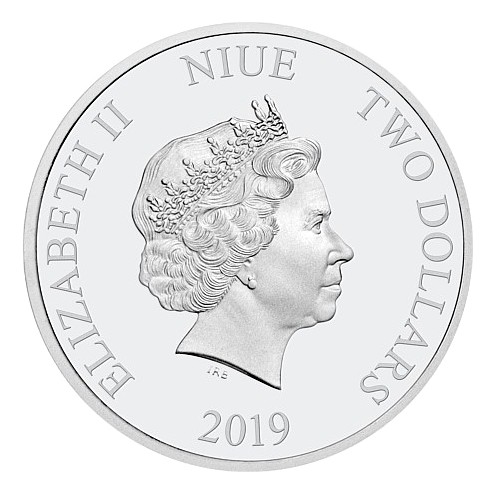 The obverse side includes an effigy of HM Queen Elizabeth II created by sculptor Ian Rank-Broadley. The denomination of TWO DOLLARS and the issuing authority of NIUE are seen in the legend surrounding the Queen’s likeness with the year of issue placed below. 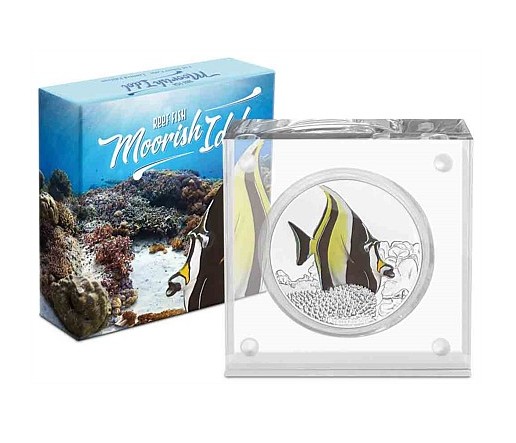 Each coin is encased in an innovative Perspex or lucite container in the shape of a block that frames the coin and allows for easy display. The packaging contains a uniquely numbered certificate of authenticity and the outer box has been designed to complement the Reef Fish series and theme. For additional information about this coin and others issued by the treasury of Niue, please visit the website of the New Zealand Mint.