The Government & Treasury of Niue have launched a new set of coins which feature the extraordinary and mythical designs of ancient on a unique pyramid-shaped coin to enhance those designs. The technology utilized in the production of these four-sided, pyramid-shaped coins is that of a similar process used for the well-known Fortuna Redux coins produced by the Mint last year. 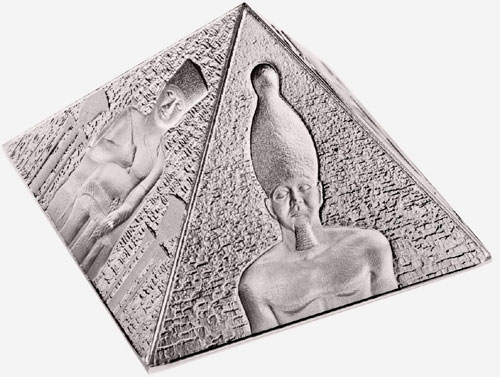 For thousands of years people have been aware of positive, healing properties of pyramid-shaped objects. In the interiors of such objects magnificent energy of space is concentrated. Several studies have suggested that a positive effect that even scale model replicas of pyramids have on their surroundings when placed in accordance to magnetic cardinal directions.

The Great Pyramids of Giza are one of the largest works of architecture made by humankind. Built for pharaohs Khufu, Khafra and Menkaure, the pyramids fascinate us with their perfect design, position and purpose resulting in thousands of years of marvel at the incredible skills and knowledge of its designers for nearly five millennia. Although these out-of-the-ordinary treasures of Egyptian architecture have been subjected to wind, dampness, sand storms, deconstruction and pillaging for centuries, they have remained almost intact becoming a symbol of the highly developed civilization and, an immortal symbol of pharaoh’s divinity. The craftsmanship evident on these coins is the result of merging the skill of designers from two far-distant epochs of contemporary and ancient times as well as those of two very different elements of artistry – one in stone, the other in precious metal. The coins exquisitely detail the ancient Egyptian characteristic for that period – a faithful replication of images of three great pharaohs as well as decorative motifs taken from the tomb of Queen Hetepheres and the statue of Nofret of Meidum. 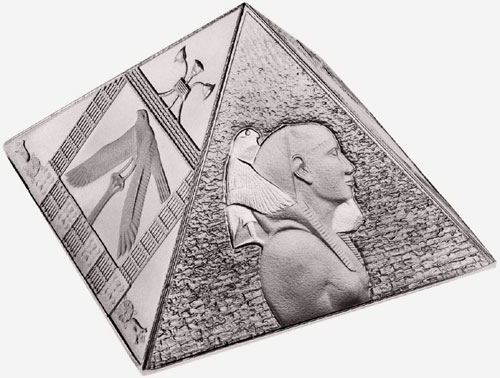 The coins, which have a weight of three troy ounces of pure silver each are designed by Urszula Walerzak and produced by the Mint of Poland on behalf of the Treasury of Niue. Three sides of the reverse depict effigies of three great pharaohs of the fourth dynasty – Khufu, Khafra and Menkaure. The forth side shows decorative elements characteristic of the era, taken from the tomb of Queen Hetepheres (Khufu’s mother) and the statue of Nofret. 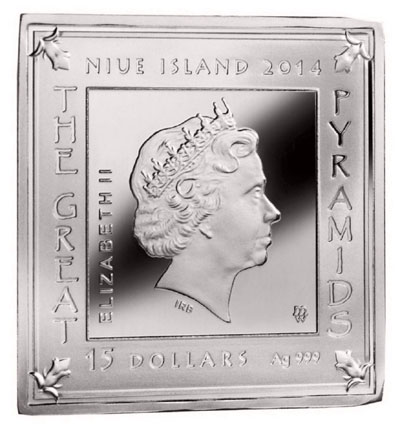 The obverse or bottom side includes the effigy of Her Majesty Queen Elizabeth II which was created by sculptor Ian Rank-Broadley and used on commemorative & circulation coins of many commonwealth countries since 1998. On the right of the Queen’s portrait is a mint mark (m/w). Along the rim are the inscriptions “NIUE ISLAND” along with “2014” and the coin’s face value of “15 DOLLARS”. Also included in the text is the hallmark of “Ag 999” and the name of the coin’s series “THE GREAT PYRAMIDS”. 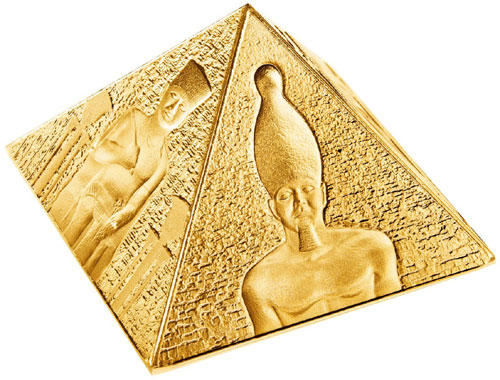 The Mint of Poland have produced three different versions of the pyramid coin. Each pyramid-shaped coin is encased in a special custom-designed Perspex capsule and placed in an attractive fold-out presentation box for effective exposure along with a certificate of authenticity. 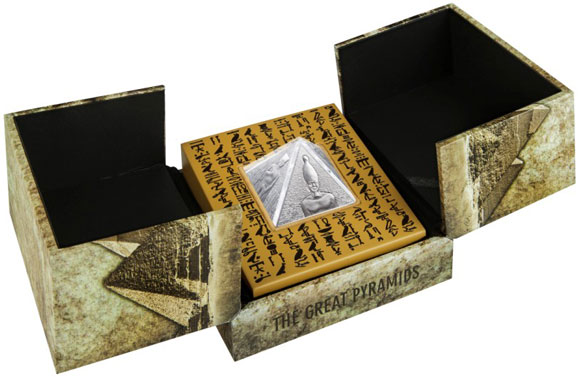 For more information on these and other coins issued by the Government & Treasury of Niue, please visit the website of the Mint of Poland at: http://www.mennica.com.pl/en/products-and-services/mint-products/coins-of-other-issuers.html Interested collectors are invited to contact the sales office of the Mint of Poland at: for further information on the easiest way to order or to find an authorized distributor in or close to your country of residence.