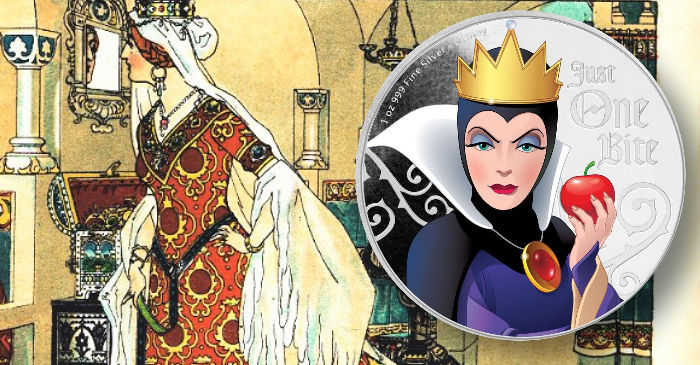 The government and treasury of the island of Niue have issued (30th April) the first silver coins which launch a new series dedicated to the Disney characters you would mostly not want to encounter. The new series highlights the villains who test the strength and fortitude of the heroes dotting the charming Disney full-length animated movies. The first coin in this imaginative series portrays the Evil Queen, whose given name is Queen Grimhilde, in the beautifully animated classic 1937 movie Snow White and the Seven Dwarfs. Snow White tells the story about a jealous and merciless queen, desperate to be the fairest of them all, and plots to rid herself of her step-daughter Snow White — who she learns is now more beautiful than her.

The story is about a vain queen who has become a widow after the death of her husband, the king, and who now rules the kingdom in her own right. She is in possession of a magical mirror with which she could look upon whatever she wished. She regularly asks the mirror who is the fairest in the realm, and the mirror would always reply that she is. One day, however, the mirror answers her obsessive question by saying that there is a new fairest woman in the land and it is her own 14-year-old stepdaughter, Princess Snow White. She becomes uncontrollably jealous of Snow White’s emerging beauty and commences to turn her into a scullery maid in her own home. After observing a handsome prince from another kingdom singing a love song to Snow White, the jealous queen commands her faithful huntsman to take the princess deep into the forest and kill her. He is ordered to bring back her heart in a box to prove that he had done as requested. However, he cannot bear to kill the young princess upon realizing that she is impervious to harm, so he alerts Snow White of the queen’s plot and tells her to run away and never to come back.

To escape the queen’s fury, he comes back with a pig’s heart and tells the her it is the heart of the young princess. When she questions her magic mirror who is now the fairest in the land, it again replies that Snow White is still the fairest and that she is living at the cottage of the seven dwarfs, revealing that the box contains the heart of a pig. The dwarfs, who are fearful of the queen’s black magic, take in Snow White anyway and give her protection. Desperate to see that the job of killing the young princess is carried out, the queen transforms herself into an old woman who visits Snow White at the cottage — carrying a ripe, red, and poisonous apple. The queen, now elderly in appearance, finds Snow White baking a pie for Grumpy the dwarf. Snow White’s animal friends realise that the old woman is, in fact, the evil queen. After an unsuccessful attempt to warn Snow White by attacking the Queen, they go to warn the dwarfs who were working down in the diamond mines at the time of the queen’s arrival. The queen tricks the princess into letting her inside the cottage and offers Snow White the poison apple, telling her that it is a magic wishing apple. Snow White takes a bite and falls to the floor, apparently dead.

As the queen celebrates her victory, she is soon discovered by the angry seven dwarfs, who grab pickaxes and chase her deep into the forest as a great storm begins. She climbs up into the mountains, where she gets trapped upon a cliff that overlooks a seemingly bottomless canyon. As the evil queen tries to push down a large boulder to crush the approaching dwarfs, a lightning bolt strikes between her and the boulder, destroying the cliff and sending the screaming queen and the boulder down the abyss to her death. As the dwarfs look wide-eyed over the cliff’s edge, they cannot see her, but know that the evil queen’s dark reign is over. As the dwarfs come upon Snow White, believing they’re too late, the very prince who had sung a love song to the young princess re-appears in time to save Snow White. He sings to her one more time and she re-awakens from the deep sleep that the apple caused. The kingdom and the castle are then taken over by the revived Snow White and the prince who broke the spell. . . and they lived happily ever after. 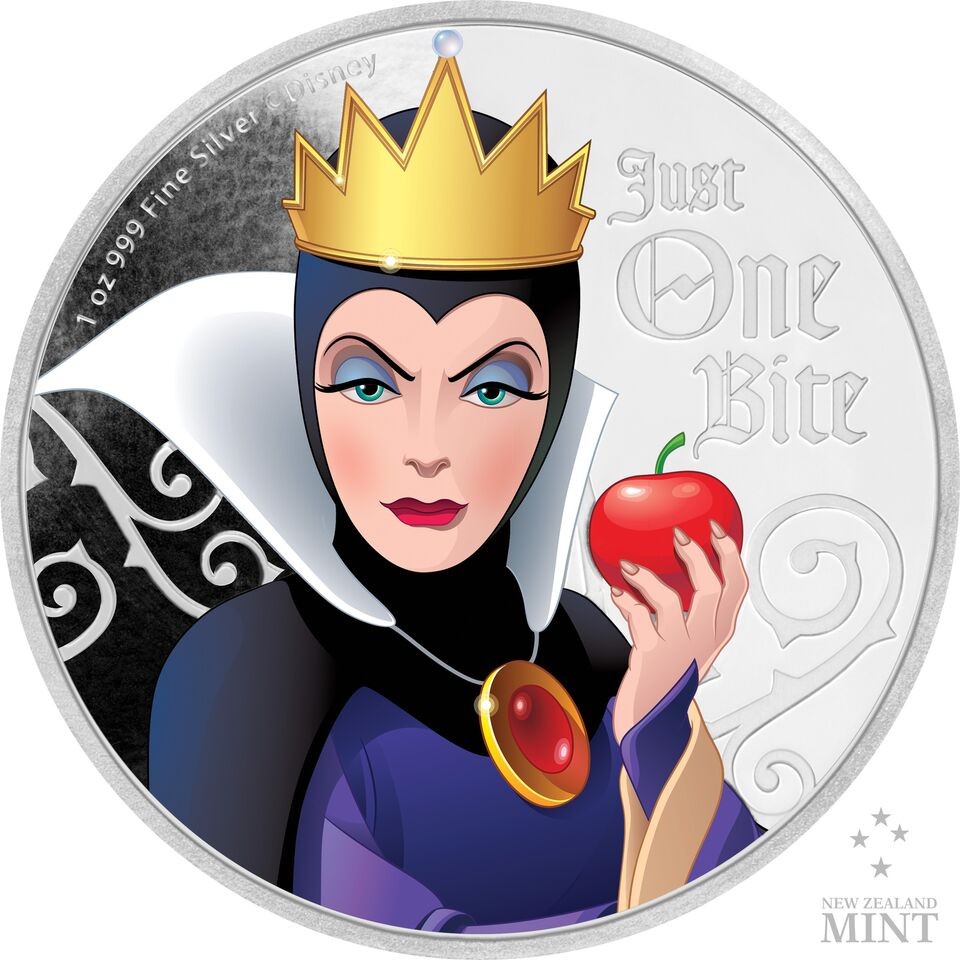 The coin is produced by the New Zealand Mint at its facilities in Auckland on behalf of the Treasury of Niue and includes a vividly colourful depiction of the Evil Queen, who is pictured holding her poison apple below the engraved phrase Just One Bite. 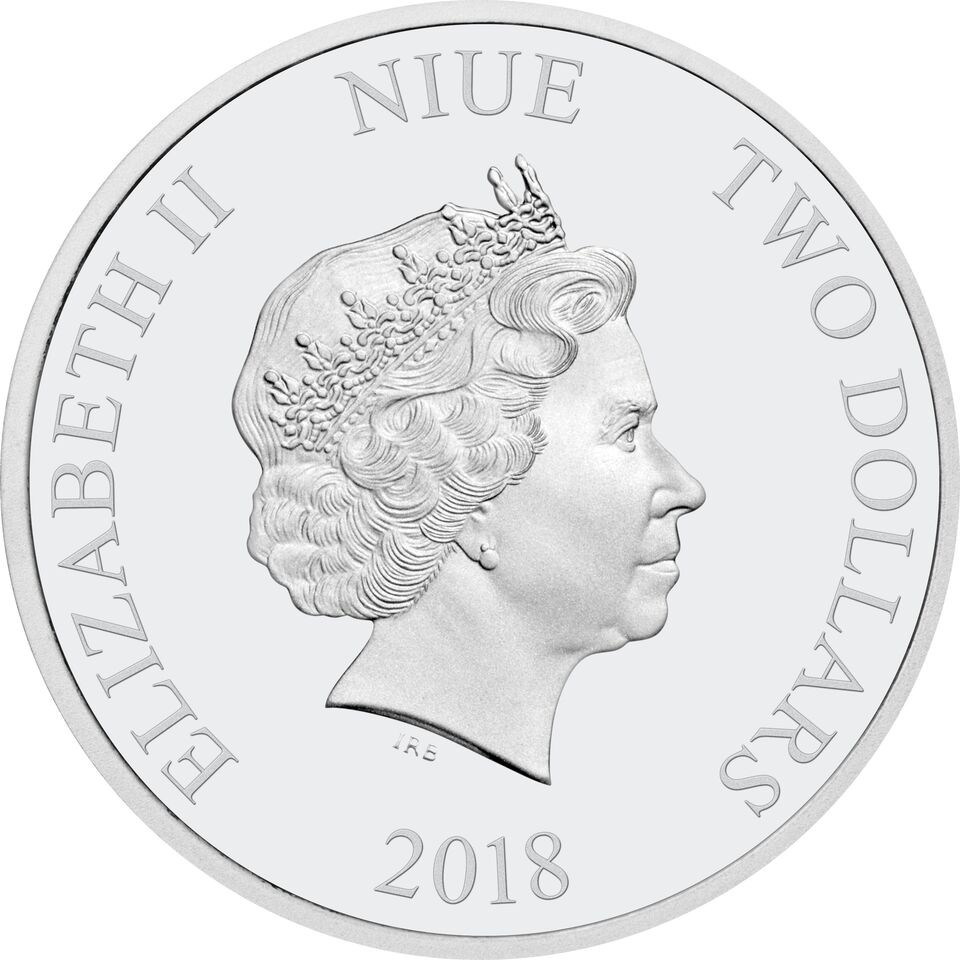 The obverse includes the Ian Rank-Broadley effigy of HM Queen Elizabeth II, the issuing authority, the coin’s denomination of TWO DOLLARS, and the year of issue, 2018. 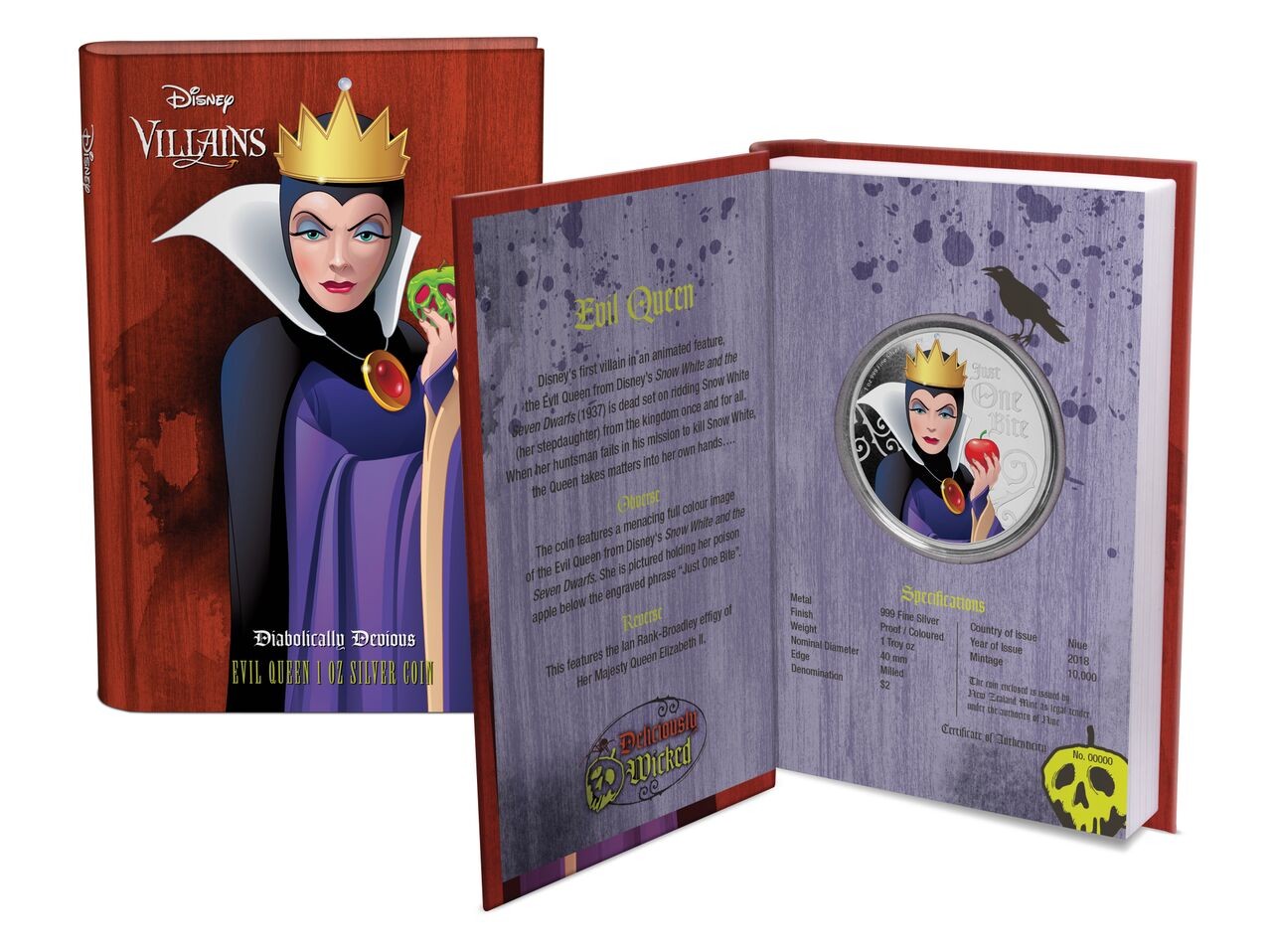 The “Evil Queen” collector coin is the first of four coins planned in this new series and is available on the 30th April. Each coin is delivered in complementary, custom-designed fairy-tale book-style packaging. The graphics and illustrations on the coin case are in keeping with the specific Disney Villains theme. For additional information on these and other coins issued by the government and treasury of Niue, please visit the website of the New Zealand Mint.