The government and treasury of the island nation of Niue have issued (21st August) new collector coins which mark the celebration of the 90th birthday of the world’s most beloved cartoon mouse: Mickey Mouse. The endearing mouse made his debut in a black-and-white short cartoon on the 18th November 1928, which was entitled Steamboat Willie, and was hand drawn by his creator Walt Disney. This particular Disney cartoon holds the distinction of being the first cartoons to ever successfully utilise synchronised sound with the moving image shown and was so popular that it was talked about more than the feature film it was meant to compliment.

The production of Steamboat Willie took place between July and September 1928 with an estimated budget of $4,986. Before its final production with synchronised sound, Disney had previewed the cartoon with an audience who viewed the film with live sound instead of recorded to gauge their reaction to the idea of moving image and sound together. With their positive reaction, Disney pressed further with his new-found confidence to ensure that the image and sound would be as accurate as possible in order to give the songs and soundtrack greater appeal, and vice versa. The cartoon was to accompany the feature film Gang War which was, in fact, a part-talking gangster film starring Jack Pickford. Disney was paid the princely sum of $500 per week for the cartoon’s use, considered a staggering amount for the day.

In the short animated film, Mickey Mouse is a mischievous deckhand on a riverboat, who plays “Turkey in the Straw,” utilizing an animal menagerie as his instruments. The tyrannical Captain Pete is not amused, and Mickey ends up peeling potatoes in the galley. It has been said that this was the start of an empire which Mickey built, and the ensuing Walt Disney productions would go on to produce some of the world’s most memorable short-story cartoons and full-length animated feature films which in many cases were saluted with countless awards for their excellence.

Walt Disney productions also went on to create the world’s first theme park and entertainment complex based on a cartoon character, with Micky Mouse heading the troupe of characters who were later created by Walt Disney. The world would soon be introduced to the likes of Donald Duck, Goofy, Pluto, Minnie Mouse, Daisy Duck — not to mention additional animated characters such as Scrooge McDuck, and Huey, Louie, and Dewey — the mischievous nephews of Donal Duck.

Today, Steamboat Willie is considered ground-breaking in terms of technological advancement for both animated and feature films. Despite the cartoon receiving some criticism at the time of its release, it also received wide critical acclaim, not only for introducing one of the world’s most popular cartoon characters but for its technical innovation. In 1994, members of the animation field voted Steamboat Willie 13th in the book The 50 Greatest Cartoons, which listed the greatest cartoons of all time. In 1998, the film was selected for preservation in the United States’ National Film Registry for being deemed “culturally, historically, or aesthetically significant.” 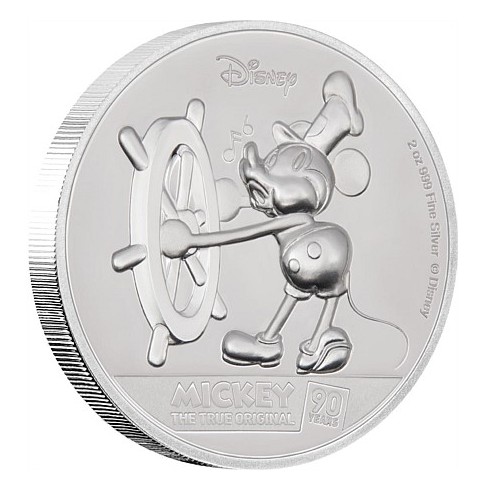 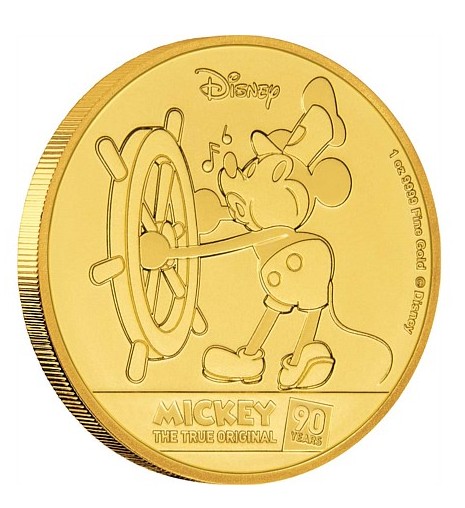 The coins are produced by the New Zealand Mint at their facilities in Auckland on behalf of the treasury of Niue. The reverse of the silver coin features a high-relief strike on piedfort (or double-thickness) blanks, which results in a deeper relief design and greater detail. The reverse of both versions features a charming engraved image of Mickey Mouse as his Steamboat Willie character from 1928. The inscription, which is shown below the primary design, reads MICKEY THE TRUE ORIGINAL 90 YEARS in stylised scripts. 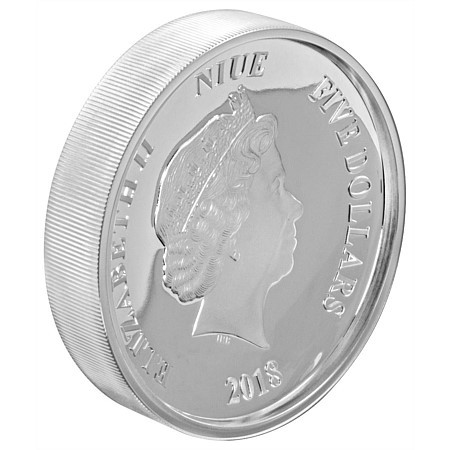 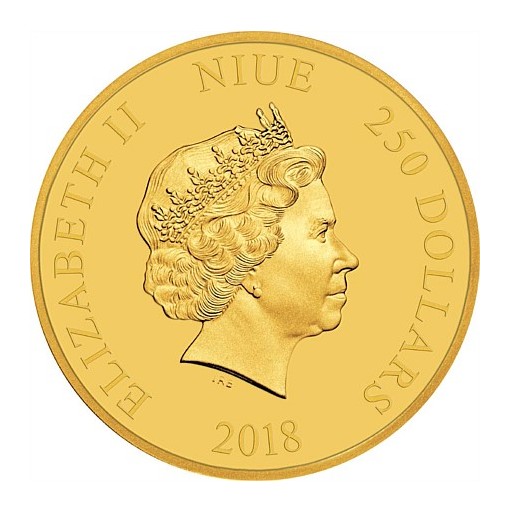 The obverse includes the Ian Rank-Broadley effigy of HM Queen Elizabeth II. The legend around the silver coin includes ELIZABETH II NIUE FIVE DOLLARS. The year of issue 2018 is placed below the Queen’s effigy. 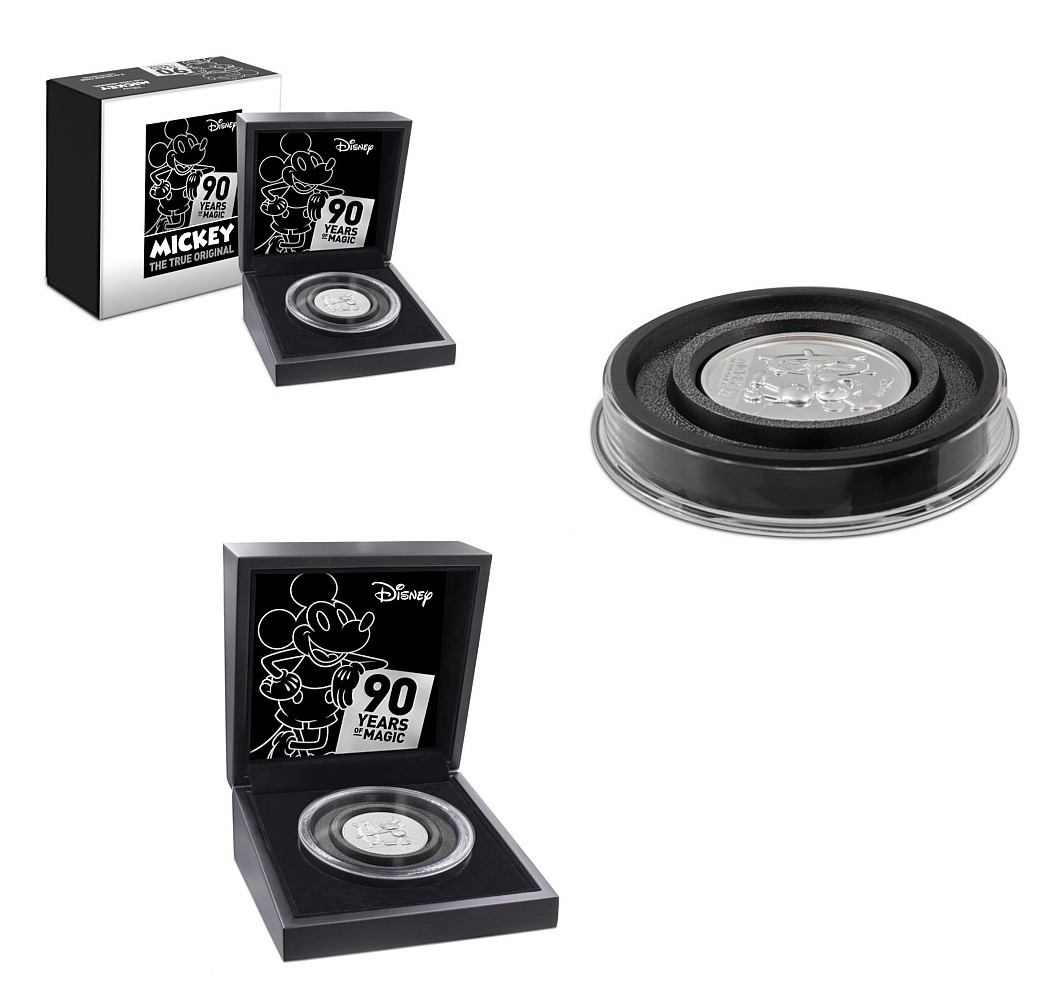 The silver two-ounce piedfort high-relief coins are specially encapsulated and presented in custom cases to accommodate their double-thick format. Each silver coin is accompanied by a certificate of authenticity. The gold coins are encapsulated and presented in custom cases, including a relevant certificate of authenticity as well. For additional information about these coins and others issued by the Treasury of Niue, please visit the website of the New Zealand Mint.