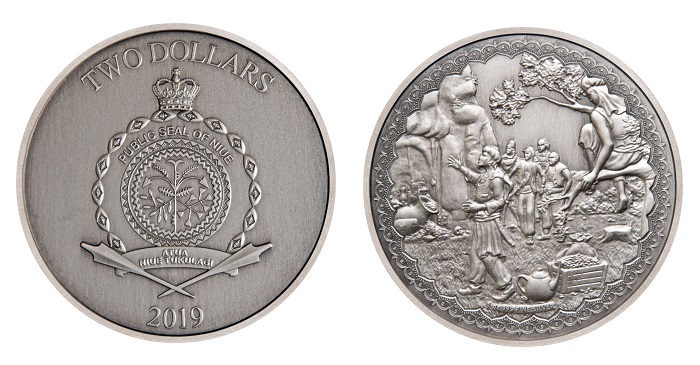 The government and treasury of Niue have issued (29th March) new silver crown coins which launch a new and exciting series that focuses on the Arabian Nights tales. In 1885, author Richard Francis Burton published translations of One Thousand and One Nights, the text’s original name. First compiled in 10 volumes, he called them “The Book of the Thousand Nights and a Night.” His addendum Supplemental Nights was published between 1886 and 1888 in six volumes. The first coin features the story of Ali Baba and the Forty Thieves, one of the more familiar stories in the collection.

The Story, 29th Saga in the Collection

Ali Baba is a poor woodcutter, who, one day was in the forest when he noticed a band of 40 thieves standing in front of a blocked cave. The leader of the band of thieves is heard to say “Open Sesame!” and before Ali Baba’s amazed eyes, the sealed entrance of the cave magically opens and the men disappeared inside. As they emerge from out of the cave and seal back up the entrance, the leader shouts “Close Sesame!” and the cave is sealed once more.

Trembling with excitement, Ali Baba waits until the thieves left and attempts to enter the cave himself after saying the magic words. To his delight, the cave entrance opens once more, and to his astonishment, he finds untold amounts of riches and unimaginable treasures. Ali Baba quickly leaves this magical lair and rushes home to tell his brother Kassim about the wondrous cave. Kassim, however, sets off to retrieve some treasure for himself. Sadly, he forgets the magic words to open the entrance of the cave and the thieves, returning to their hide-away, discover Kassim and kill him. Ali Baba discovers his brother’s lifeless body in the cave, and with the help of a slave girl named Morgiana, he brings Kassim back home to bury him.

Realising that someone else knows about their hidden riches in the cave, the thieves track Ali Baba down. The leader, who is disguised as an oil seller, befriends Ali Baba but isn’t alone. He brought along with him mules loaded with 40 large oil jars containing the other thieves. Help comes from the clever Morgiana, who recognises the oil seller and pours boiling oil into the jars, killing the other thieves. In order to distract the leader of the thieves, Morgiana dances enticingly to gain his attention, and when he is close enough to her, she stabs him and saves the life of Ali Baba. They both live happily ever after. 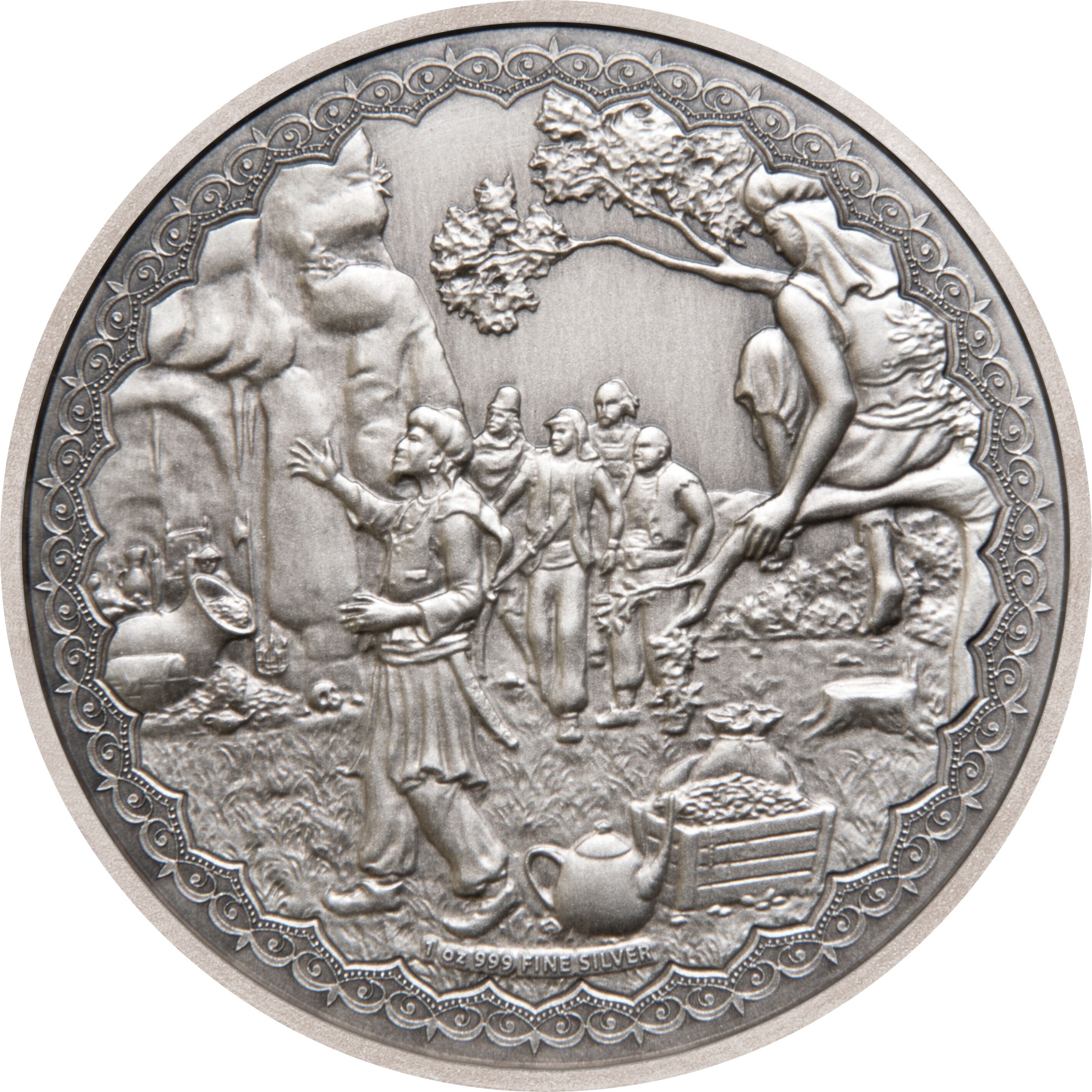 The coins are produced by the New Zealand Mint at their facilities in Auckland, on behalf of the treasury of Niue. The intricate design on the reverse side of the coins is inspired by the story and a number of available images to create a compilation showing the leader of the forty thieves at the entrance of the cave. Just as he speaks the magic words and the cave opens, Ali Baba is perched on a tree branch watching the cave open. 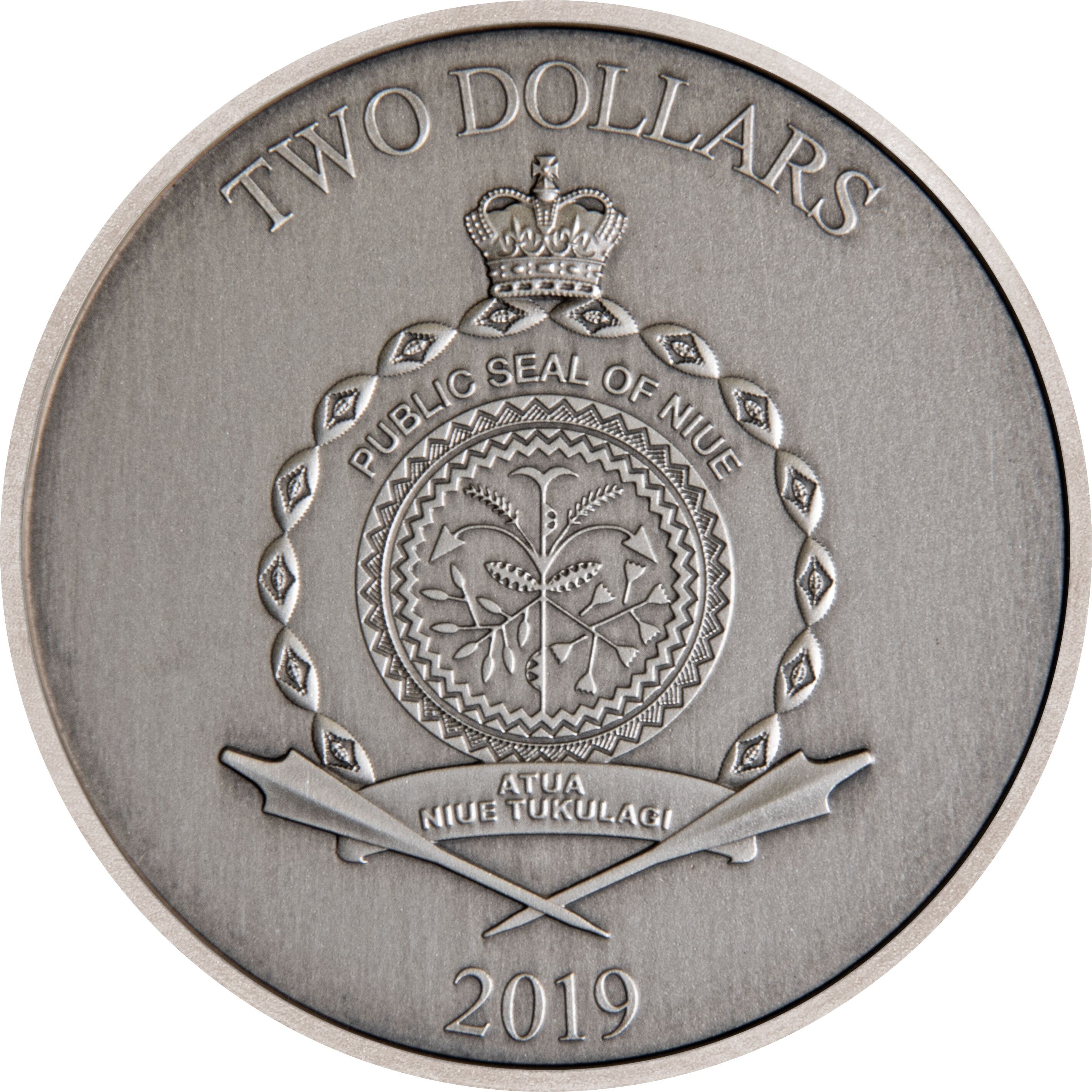 The obverse includes a brand new crest for the government of Niue that is being used for the very first time on this coin. It has been created in association with the government of Niue and will alternate on collector coins as appropriate. Above the seal is the denomination of the coins, TWO DOLLARS, and the year of issue, 2019, which is placed below. 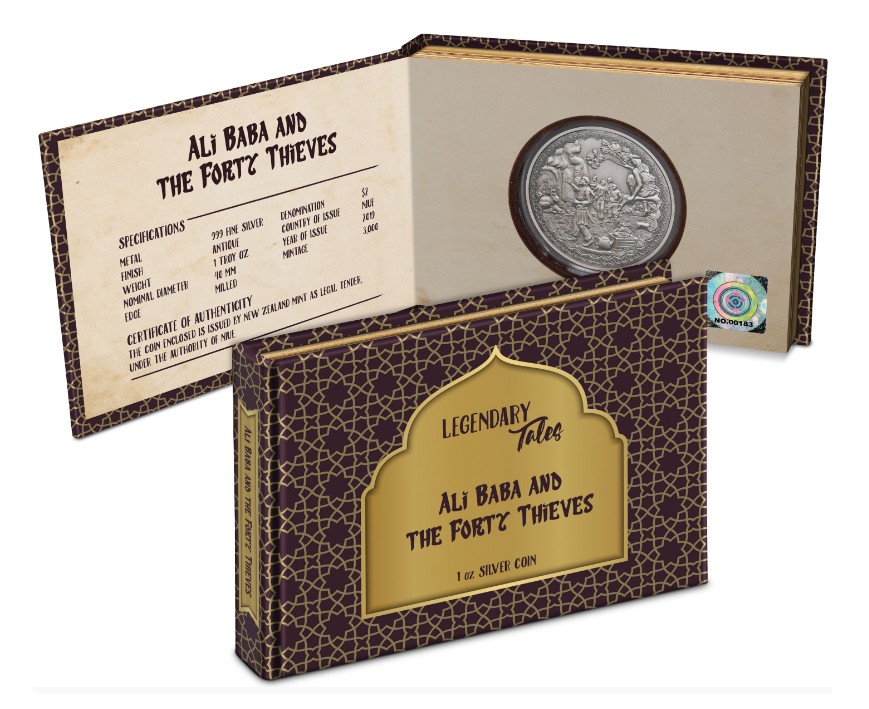 The coins are encased in a storybook-style presentation folder with the encapsulated coin fitting into the back portion. The case itself includes the certificate of authenticity. For additional information about this coin and other coins issued by the treasury of Niue, please visit the website of the New Zealand Mint.

The Design Features and Meanings Behind Niue’s New Crest

A representation of HM the Queen as the Head of State of Niue, the crown placed atop a garland wreath symbolises the respect and honour that Niue places in Her Majesty.

A traditional Niuean design, the symbolism of the garland wreath represents honour and respect. The partial wreath is made up of 14 segments which represent the 14 villages comprising the island nation of Niue.

The outer ring represents Niue’s custom of weaving and handicrafts. Traditional Niuean design is used to represent the binding of Niue to the rest of the world, with the world being represented by the circular shape of the design.

The second inner ring incorporates the traditional Niuean design of the lau niu/pola.

The triangles shown inside the border of the ring represent the frequent use in traditional Niueanhiapo designs, but also represent a jagged edge that refers to the “Rock of Polynesia.”

Stylised Tree in the Centre

The representations are traditional Niuean designs that characterise growth and prosperity. The tree itself represents life and is inspired by the flora of Niue. The placement of the tree in the centre represents life on Niue, sustenance, and the culture of Niue and its people.