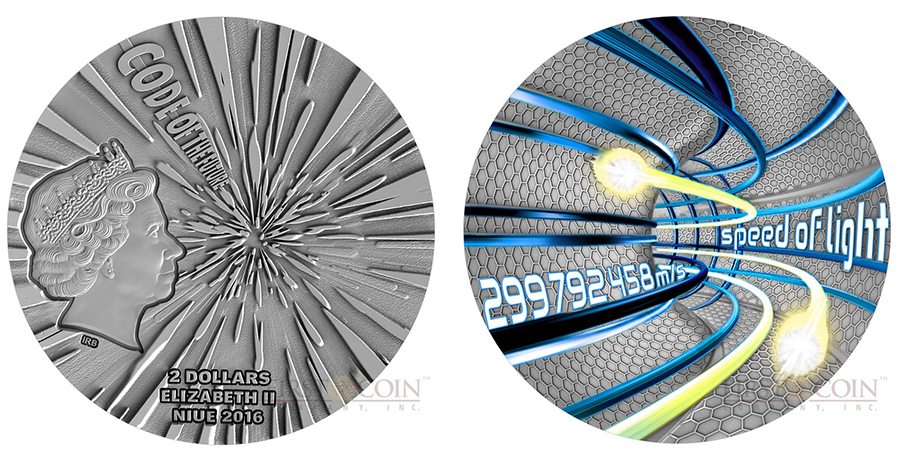 The Mint of Poland has announced the second coin in Niue Island’s popular Code of the Future series. “Speed of Light” is the new companion to the popular “Artificial Intelligence” coin, which was released earlier this year.

When “Artificial Intelligence” made its appearance, some collectors were dubious. Modern collector coins are known for taking risks with innovative subjects, shapes, designs, and compositions. When they fail, it is generally because of clumsy design, a weak concept, and/or shoddy attention to detail. On each of these criteria, “Artificial Intelligence” excels, winning over many a coinage curmudgeon with its features.

The first coin in the Code of the Future series, “Artificial Intelligence.”

“Artificial Intelligence” examines the highly technical subject of artificial intelligence with a tip of the hat to its depictions in science fiction. Its eerie design elements hint at such films as Metropolis, Terminator, Blade Runner, and others. The newer “Speed of Light” is AI’s brainier descendant, skipping most of the pop-culture bits and going straight for the physics. The design repeats the “wormhole” effect of its predecessor, this time bending the shape in the opposite direction. Streaming from it are blue and yellow streaks of applied color, suggesting beams of light. Their curving path gives a feel of blinding speed—in fact, a very specific blinding speed: 299,792,458 meters per second, which is the speed of light for which the coin is named. These digits, 299792458m/s, along with the coin’s name, speed of light, appear on the curving walls. Not only does the design suggest light, the coin itself emits light by glowing in the dark. 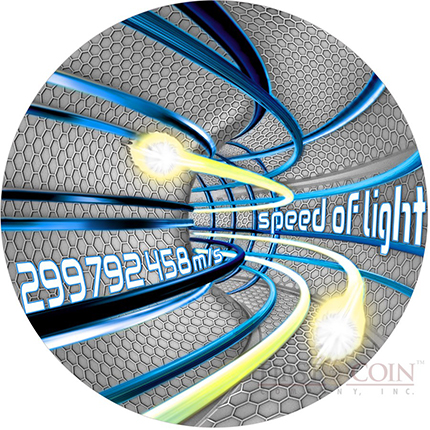 On the obverse, jagged streaks emanate from a point just to the right of center. The effect is like the classic movie depiction of stars blazing past at warp speed. The series name, CODE OF THE FUTURE, heads into that vanishing point from upper left. At the bottom, in three lines, are the phrases 2 DOLLARS, ELIZABETH II, and NIUE 2016. The small effigy of HM Elizabeth II, designed by Ian Rank-Broadley, is situated to the left. 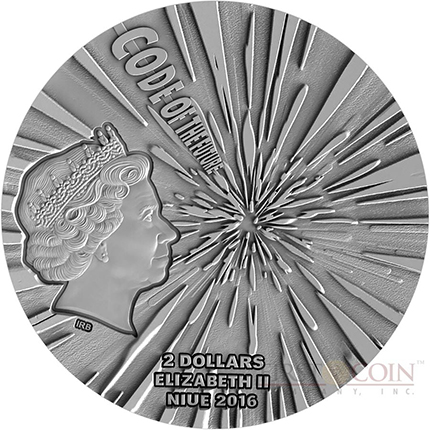 The coin’s specifications are as follows:

First Coin Company, the North American distributor for the series, is taking pre-orders for “Speed of Light,” which will begin shipping in March 2017. Visit the website for information on free international shipping and other incentives, or to place an order.   ❑
Share: