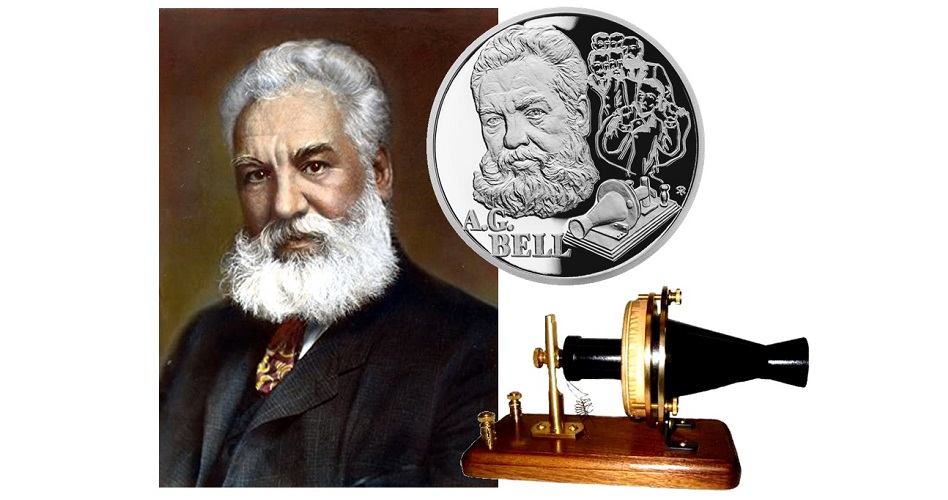 The government and treasury of Niue have released the fourth and final silver Proof coins which are part of their very popular collector series entitled “Geniuses of the 19th Century.” The coins focused on some of the most essential and revolutionary inventions which changed the lives of much of the world population, and the men behind their brilliance and innovation. The fourth coin highlights perhaps one of the inventions of necessity, the desire to communicate long distances in an instant. The creation of the telephone changed man’s ability to speak and deliver information over electrical wires using voice rather than a dash code, as had been the case with Samuel Morse’s invention of the telegraph in previous years. It was the innovative breakthrough of Alexander Graham Bell (1847–1922), which propelled the limits of communication in a direction not before thought possible. 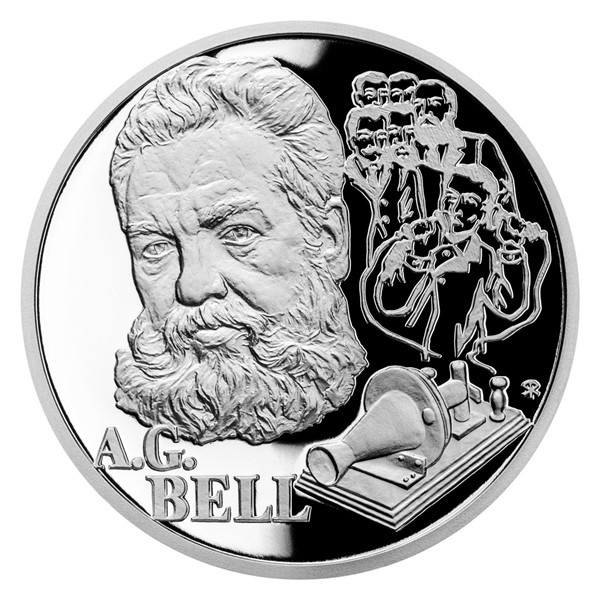 The coins are produced by the Czech Mint at their facilities in Jablonec nad Nisou, on behalf of the treasury of Niue, and are designed by the medalier Asamat Baltaev DiS. The reverse side depicts a realistic portrait of Bell, which is based on a photograph of the inventor in his later years. The inscription A. G. BELL is placed just under the portrait. A composite of people watching Bell as he places a telephone call is seen to the right of the portrait, and a replica model of the first telephone is shown just under the composite. 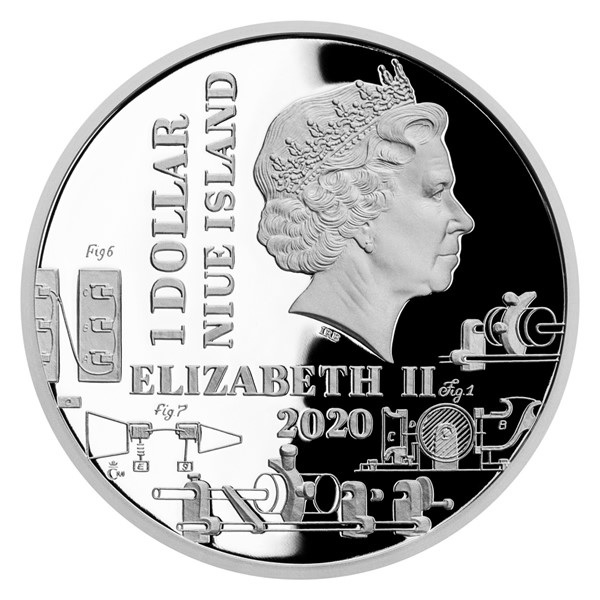 The obverse side of the coin includes an effigy of HM Queen Elizabeth II created by British sculptor Ian Rank-Broadley and also includes a collection of drawings of various inventions from the 19th century depicted in the “Geniuses of the 19th Century” series. The nominal value of 1 DOLLAR is shown in vertical text, and the year of issue 2020 is seen under the Queen’s name. 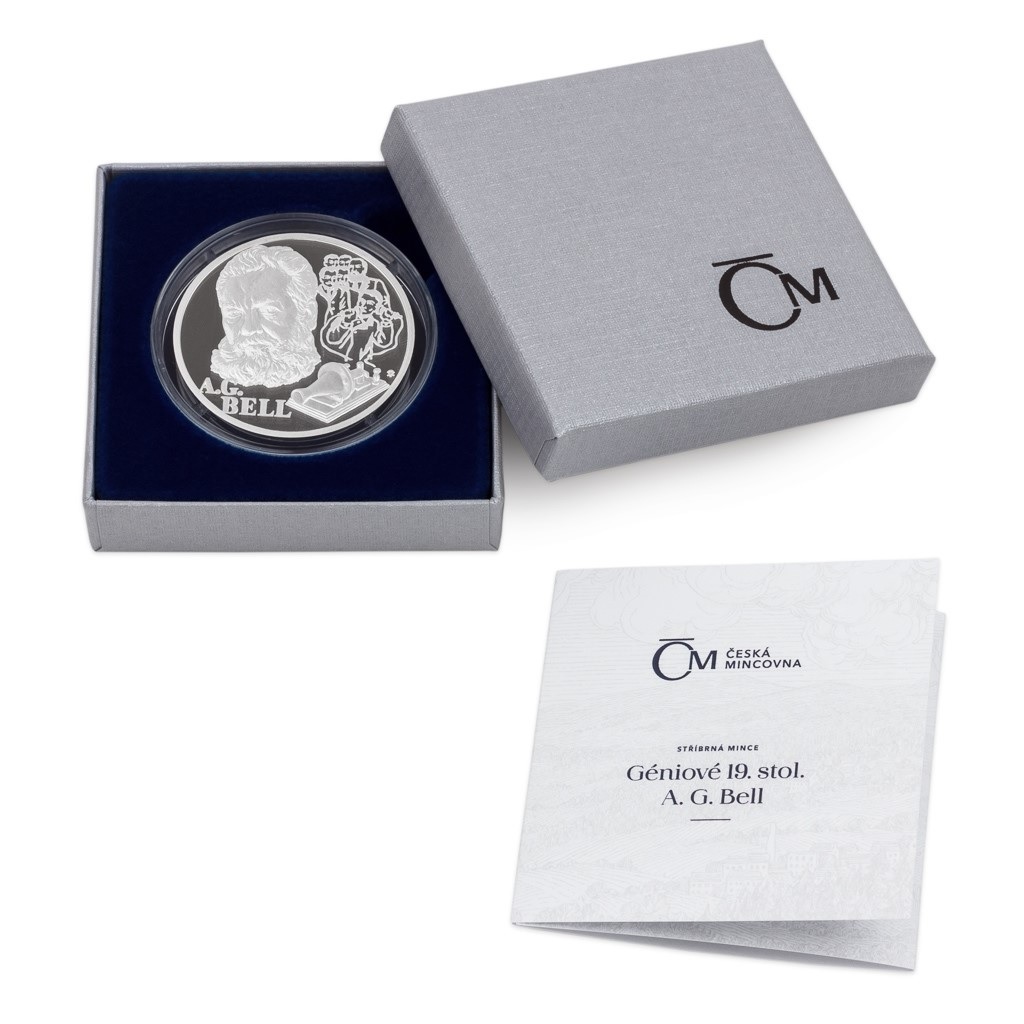 The now-complete collection includes inventors Thomas Alva Edison (phonograph), Nikola Tesla (alternating current), Alfred Bernhard Nobel (dynamite), and Alexander Graham Bell (telephone). Each coin is encapsulated and presented in a hardboard custom case, accompanied by a certificate of authenticity. A custom retro-designed metal case that will enable the inclusion of all four coins is also available separately. For additional information, collectors may contact either the Czech Mint for European collectors or the New Zealand Mint for the rest of the world.

Born in Edinburgh, Scotland, on the 3rd March 1847, into a family which had been developing the spoken language for generations by pioneering methods of correcting speech defects, Alexander was determined to continue this work as an adult. In this endeavour, he studied acoustics at the universities of Edinburgh and London, also motivated by his efforts to help his mother, who was profoundly hard of hearing. It was his firm belief that technological progress would completely cure deafness one day. After an epidemic of tuberculosis which swept through London, and the loss of brothers Edward in 1867 and Melville in 1870, the Bell family moved to Canada, with Alexander settling himself in Boston by 1871. He obtained a position at the Boston School for Deaf Mutes as a teacher and also taught at the Clarke School for the Deaf in Northampton, Massachusetts, later at the American School for the Deaf in Hartford, Connecticut. However, the belief that technology could help the deaf hear was still, if not stronger than ever. Lacking the actual or formal education and engineering skills, Bell was determined to compensate these shortcomings with extraordinary diligence and by teaming up with his assistant Thomas A. Watson (1854–1934). Together, they had worked to devise an apparatus which could send voice through telegraph wires instead of a multitude of telegraph dots and dashes.

Also, during this time the Western Union Company, the Post Office and a rival inventor, Elisha Gray (1835–1901), were also working diligently to develop similar means of communication. It was Alexander Graham Bell who first filed a patent describing his method of transmitting sounds on the 4th February 1876, just hours before Gray filed his own statement of concept on a similar method.

It was just three days after having been awarded the patent for a telephonic apparatus that Bell’s idea, the invention of transmitting sound-induced electrical signals over wires between two devices, finally achieved success. It was on the 10th March 1876 when the human voice had been transmitted and received on wires for the first time ever and when the groundbreaking experiment went from concept to reality. While Thomas Watson was in a different floor with his model receiver, Alexander Graham Bell was downstairs with the speaker portion and said what has become the most memorable sentence: ”Mister Watson, please come here, I want you.” The enthusiastic assistant came downstairs to exclaim he heard his partner’s voice from the receiver. However, the revolutionary invention, without which we cannot imagine our lives today, was poorly received by the very companies who were in the race to invent the ability to transmit the human voice over wires. The Post Office rejected Bell’s telephone outright as a useless invention, and it seemed the years of hard work and persistence was all in vain. It was not until the meeting between Bell and one particular imperial guest at the Centennial International Exhibition of 1876. The first official World’s Fair held in the United States was in Philadelphia, and it was here that the inventor had received some imperial acknowledgement. In November 1876, as Bell demonstrated his telephone by speaking into his funnel that Emperor Pedro II of Brazil took notice and shouted “God, it is talking!” pointing to the receiver end.

Suddenly, a wave of rapid interest broke out both in America and all over the world, and soon after news of the invention of the telephone quickly spread. Bell would go on to earn a staggering $100 million on royalties during the next 20 years. Alexander Graham Bell returned to Great Britain in 1878 to demonstrate his telephone invention. This time his audience was Queen Victoria, who saw and made her own telephone call from Osbourne House to London on the 14th January. Bell would go on to invent the microphone, and, most importantly, an audiometer which could accurately diagnose hearing loss.

Alexander Graham Bell, who eventually became one of the most celebrated inventors in America, died 2nd August 1922 at the age of 75. He was survived by his wife Mabel Hubbard Bell, whom he had met when she was a student of his while teaching at the American School for the Deaf, and their two daughters. At the time of his death, there were already 22 million telephones in use around the world. On the day Bell died, they all fell silent for one minute. Bell’s additional legacy was that he was also one of the founders of the National Geographic Society in 1888 and succeeded his father-in-law, Gardiner Hubbard, as president of the society between 1898 and 1903.