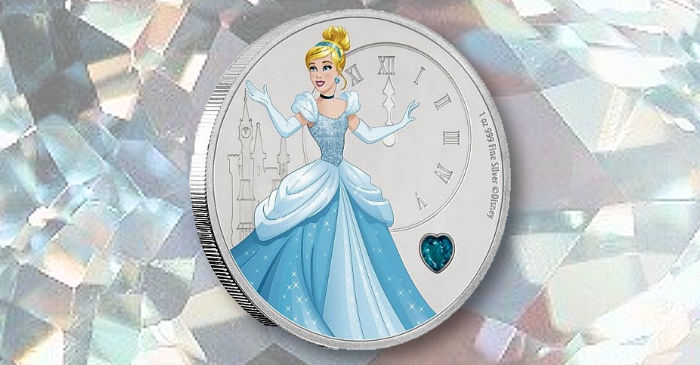 The government and treasury of the island nation of Niue have issued (5th March) the first coin in a new series which features some of most beloved and well-known Disney princess characters. The first of these royal princesses depicted is remembered for her magical night at the ball when she met her Prince Charming: Cinderella. The story of this beautiful young girl sees her introduced to the world as a servant to her wicked step-mother and two homely step-sisters who only see Cinderella as no better than their personal house-maid as she is compelled to attend to all of their needs. On the day of the big ball, when it is known that the king’s heir will choose a bride from all of the eligible girls in attendance, Cinderella’s two step-sisters are all excited to attend, as one of them may fit the bill. Cinderella dreams that she too can attend the ball and attempts to find a suitable dress appropriate and pretty enough to catch the eye of the prince. Sadly, she is found in her lovely dress and it is torn off by her step-sisters in a fit of jealousy, leaving Cinderella sobbing on the floor. Furthermore, her step-mother prevents her from attending by piling on the work, and now that is clear that she has nothing to wear, she simply cannot go to the ball regardless. As her stepmother and step-sisters leave for the ball, the magic begins with the appearance of Cinderella’s fairy godmother who waves her magic wand. In a flash, Cinderella’s torn dress is transformed into the most splendid and sparkling ball gown — resplendent with a tiara and glass slippers. Of course, the problem of how to arrive at the ball is solved with a pumpkin which is turned into an equally splendid coach complete with footmen and a driver — courtesy of the resident mice who are turned into her attendants for the night. The caveat for Cinderella to attend the ball is that she must leave the castle before the strike of midnight or the spell will end before Cinderella arrives back home.

Cinderella arrives at the castle and is escorted into the ball. Almost immediately, she catches the eye of the land’s most eligible bachelor — the prince who insists on dancing with her. The couple dance and they are obviously meant to be together, but, in the midst of the dancing and enchantment for each other, Cinderella hears the first chime of the clocktower ushering in midnight. Quickly, she runs out of the ballroom and into her awaiting coach — leaving behind one of her glass slippers on the staircase with the prince in earnest pursuit. As the coach speeds away from the castle with Cinderella inside, the last chime of midnight is heard and the coach is returns to its original form — a pumpkin. The footmen and driver revert back to mice and Cinderella finds herself on the road dressed in her old servant’s dress and walks the rest of the way with her cherished memories of such an unforgettable evening, as well as the one remaining glass slipper which she takes home with her.

News is received by all of those families who were in attendance of the ball that a glass slipper was found by the prince and it belongs to the girl that he will marry. Immediately, many girls fantasise about being that girl, but it belongs to just one girl. As the prince goes from house to house, and every eligible girl tries it on with no luck, he reaches the house of Cinderella and her step-sisters. Both girls attempt to squeeze their foot in the slipper without success, frustrating their mother. When the prince asks if there are any other girls in the house, he is told that there is only the servant girl but they think she could not be who he is looking for. As the prince demands to see her, Cinderella’s step-mother knocks the glass slipper out of the hands of the prince. The slipper is gone, until Cinderella produces the other slipper as proof she was not only at the ball but it was she that he danced with all night. The couple is married and Cinderella lives happily ever after with her prince in their exquisite castle.

The story was made into a full-length animated movie which charmed audiences young and old for decades since its release in 1950. The movie also included several songs which also made the movie popular with younger viewers such as “A Dream is a Wish Your Heart Makes,” “Bibbidi-Bobbidi-Boo,” and “So this is Love.” The movie became a huge success with the beautiful castle depicted in the movie serving as a model for the actual castle which was built as part of Walt Disney Land in California. 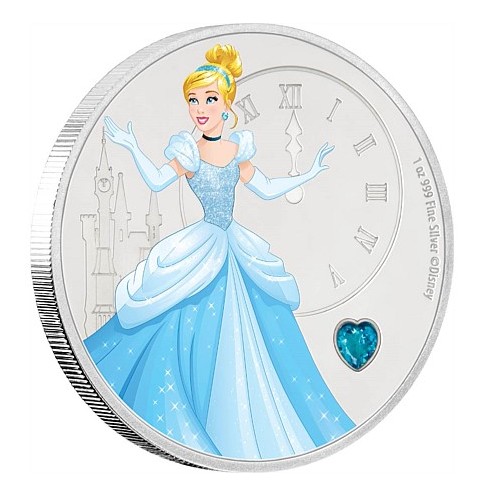 The coin is produced by the New Zealand Mint at their facilities in Auckland on behalf of the treasury of Niue. The design of the silver one-ounce coin includes a heart-shaped aqua-blue gemstone which corresponds to the coloured image of Cinderella’s ball gown, her bodice sparkling with glitter and adding allure to her exquisite dress. Iconic images of Cinderella’s castle and the clock striking midnight are engraved in the background. The aqua gemstone insert reflects the allure and sparkle of Cinderella’s eye-catching dress. The obverse includes the effigy of HM Queen Elizabeth II, as created by Ian Rank-Broadley. The denomination of the coin, TWO DOLLARS, is included in the legend around the Queen’s likeness and the year of issue, 2018, is placed below. 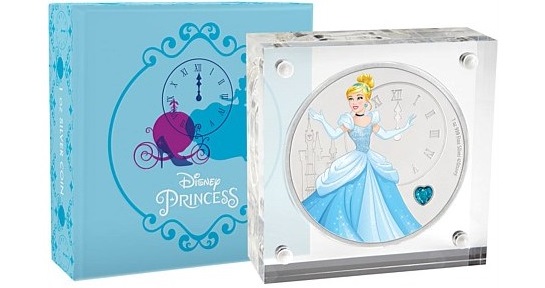 The coin is the first in a new series and is available on the 15th March. Each coin is individually packaged in an acrylic coin case allowing for the easy display of the obverse and reverse and fits neatly inside a Cinderella-themed protective box. A serial numbered certificate of authenticity can also be found inside the packaging, complementing the design. For additional information on this coin and others issued by the treasury of Niue, please visit the website of the New Zealand Mint.