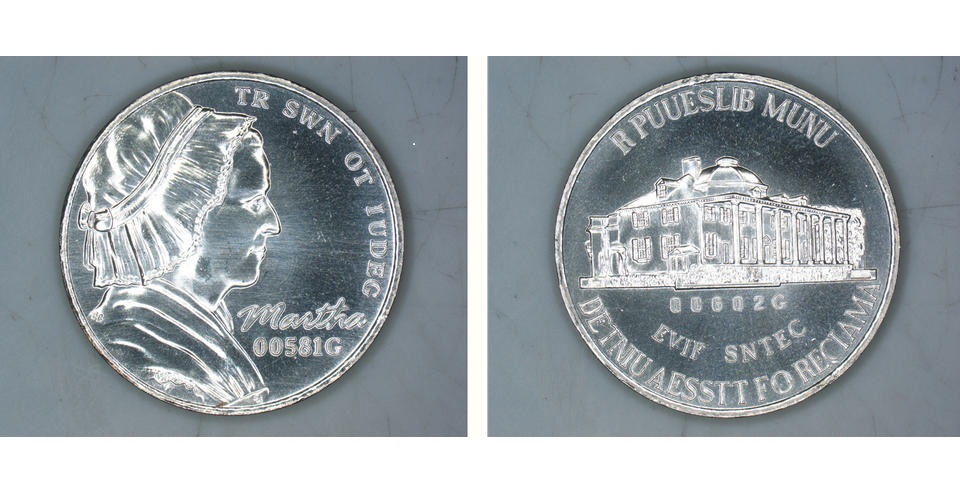 When designing a new coin, U.S. government agencies such as NIST use a “dummy” imprint so as not to run afoul of anti-counterfeiting rules. Here, Martha Washington in a mob cap subs in for Thomas Jefferson. Photo Credit: K. Irvine/NIST. Hover to zoom.

New NIST research could bring down the cost of making nickels

When designing a new coin, U.S. government agencies such as the National Institute of Standards and Technology (NIST) use a “dummy” imprint so as not to run afoul of anti-counterfeiting rules. Here, Martha Washington in a mob cap subs in for Thomas Jefferson.

Nickels are ubiquitous in American life, tumbling around in pockets, rolling under car seats, and emerging from the back of dryers to be used over and over for countless purchases. But these resilient and somewhat humble-looking coins are also becoming costly to produce. Nickel, the coin’s own namesake, has become a prized ingredient in many modern products, pushing the market value so much that sometimes making the five-cent coin costs as much as seven cents a pop.

Working in conjunction with the U.S. Mint, a research team at the National Institute of Standards and Technology (NIST) has identified an alternative approach that would reduce the cost of materials for the nickel by as much as 40 percent. This approach would produce a coin every bit as tough and reliable as the old nickel but also every bit as familiar to the American citizen.

The paper that details the work was published in the journal Integrating Materials and Manufacturing Innovation.

As an added benefit, the data from this research has also produced results that may aid high-tech companies looking for new materials to use in resilient electronics such as phones and laptops, and in a variety of radical new colors, to boot.

The manufacturing of coins is a complicated and demanding process. Coins must not corrode in the palm of a moist hand, for example. The images stamped on their faces must be resilient enough to withstand decades of commerce and the occasional turn through the laundry. Their metallic sheen must always be recognizable and of uniform thickness and density.

Although invisible to the average customer buying a gumball or a soda, all U.S. coins must also contain a predetermined amount of electrical conductivity to work in vending machines, which use a small meter to determine a coin’s currency signature. A parking meter or soda machine won’t count your nickel without this key characteristic.

In many ways, the nickel-production challenge was an ideal match for the NIST Materials Genome Initiative (MGI), which was started in 2011 with the ambitious goal of decreasing the time it takes a new material to reach the market by at least half while keeping costs low. The MGI has been building the computational and IT tools needed for the development of all kinds of new materials for use in a wide variety of manufacturing applications.

“Rethinking the nickel was one of the first times we were able to deploy the new MGI tools to design a material for a specific application,” said NIST scientist Carelyn Campbell. “We were very pleased with the results.”


The NIST team worked backward, first identifying the desired qualities for the new nickel piece and then figuring out what alloys and procedures might be needed to make it a reality. The U.S. Mint also outlined some site-specific constraints; namely, the new coin had to be produced using the existing manufacturing facilities in Denver and Philadelphia, both of which use a specific type of slow-cooling procedure.

Color proved particularly challenging. Although most people would not think of the coin as having a special tone or hue, coin collectors are a demanding group and will often reject coins that are even slightly off-tone, and collectors form a significant share of the market for money pieces. The general public also might not trust a coin that is too orange or too yellow. But color is often a subjective criterion, and one that can be hard to quantify or reproduce with any kind of reliable standard.

In this case, the use of the MGI process proved enormously helpful—surprising even the researchers themselves with how efficient the outcome was. Starting with the set of parameters for resilience, conductivity, and color, the team was able to produce a new mix of copper, nickel, and zinc that was 40 percent less expensive than the previous metal mix.

The team relied heavily on a type of materials design system known as an Integrated Computational Materials Engineering (ICME) framework. The method uses a large amount of computer modeling to discover how different components will react when mixed together. In this case, those components were metal alloys.

Experimental work is costly and time-consuming, whereas running a model on a computer is pretty fast and cheap. The idea is to use more computational resources and tools to do the legwork in the design stage to cut down on the time and the cost required to go from idea to reality.

“Within a year, we were able to put together a framework for designing an alloy, identifying, and using our model to get the correct alloy, and then moving forward and actually making the prototype, testing it out and finding out that we did meet all of our goals,” said NIST project leader and materials engineer Eric Lass. Lass is also the senior author of the new paper. In the past, such work would have taken several years.

The results could potentially save the U.S. Mint millions. In addition, several companies that manufacture high-tech items have shown an interest in the results, since there’s a strong consumer demand for electronics that are durable but also available in a variety of colors such as metallic pink.

No word yet on whether anyone is actively pursuing a phone that can make it through a turn in a hot dryer on laundry day, though.

Press release courtesy of the National Institute of Standards and Technology.