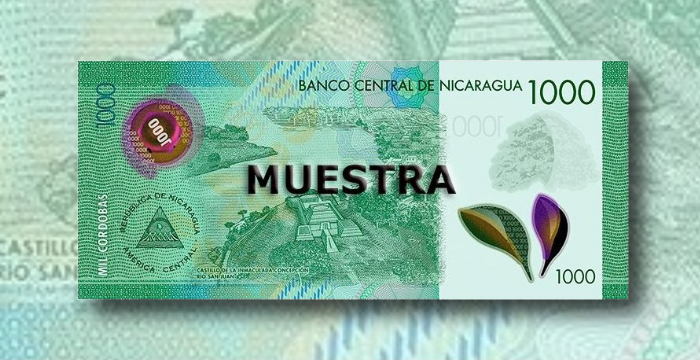 The Banco Central de Nicaragua has announced (24th June) they will shortly be issuing new versions of the 500 and 1,000-cordoba (U.S. $30.00) banknotes that will be printed on a polymer substrate. These notes were initially introduced in 2017 as paper-printed banknotes and as part of a revision and update of security features. They will now be printed on polymer.

The new directive to begin production of banknotes printed on polymer was originally approved in 2015 with the first notes being issued that same year. Denominations of 10, 20, 50, 100, and 200 cordobas were released in October 2015. The directive to transition the two highest denominations was approved by the Board of Directors of the Banco Central in October 2017. The directive sought to strengthen the quality and security of the banknotes taking into account the advances in printing technologies, supply public demand for high-denomination banknotes, and replace those current notes that are removed from circulation due to their deterioration.

The new polymer substrate banknotes incorporate high durability, which will result in substantial savings by the Banco Central in addition to ensuring greater difficulty in counterfeiting since they integrate state-of-the-art security measures. As well as their increased security, the polymer substrate is kinder to the environment since, once destroyed, the waste material is easily recyclable. The dimensions of the 500 and 1,000-cordoba banknotes remain the same, with colours and designs similar to those currently in circulation. With the issuance of these two denominations, the Banco Central de Nicaragua completes the entire polymer substrate banknote family of notes begun in 2009, with which Nicaragua will be among the first countries to have all seven banknote denominations printed on polymer substrate. 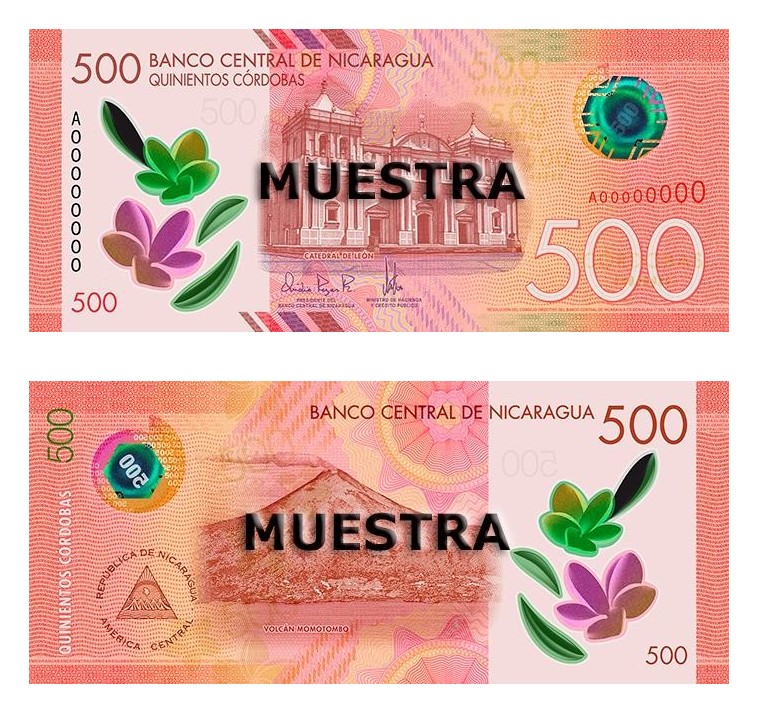 500 cordobas, red: 156 by 67 millimetres. On the face is shown the Cathedral of Leon. A significantly important and historic landmark in Nicaragua, the cathedral was awarded World Heritage Site status with UNESCO, and, as such, it is Nicaragua’s third cultural landmark. On the back is an image of Momotombo, a composite volcano in Nicaragua near the city of León. It stands on the shores of Lago de Managua. The ruins of this city are preserved at León Viejo (Old León). 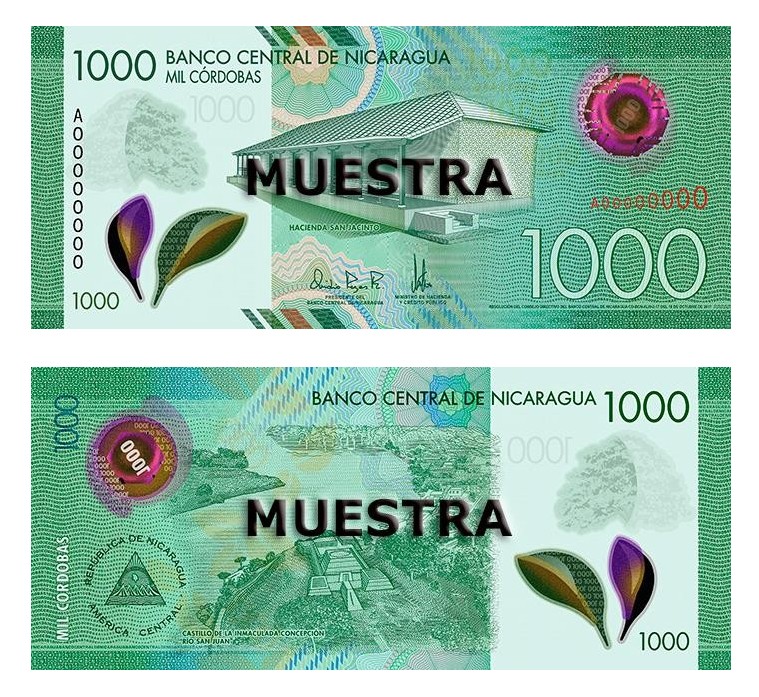 1,000 cordobas, green: 161 by 67 millimetres. Depicted on the face is an image of the Hacienda San Jacinto, the site where the battle of San Jacinto was fought on the 14th September 1856 between a group of 160 Nicaraguan Army soldiers commanded by Colonel José Dolores Estrada Vado (1792–1869) against 300 American roughriders of William Walker (1824-1860) one-time founder of the failed Republic of Sonora. The back includes an illustration of the Castle of the Immaculate Conception on the banks of the Río San Juan. The castle is a fortification located on the southern bank of the San Juan River, in the village of El Castillo in Southern Nicaragua. The fortress is on a list of sites which is scheduled to achieve World Heritage Site status with UNESCO.

Both banknote values are scheduled for an official release from the 8th July 2019 and shall circulate alongside their paper-printed equivalents until further notice. For additional information about these banknotes and other issues from the Banco Central de Nicaragua, please visit their website.