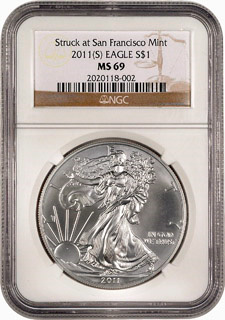 As reported recently in Coin Update, U.S. Mint officials have decided to strike American silver eagles at the Mint’s facility in San Francisco in order to help meet the growing and unprecedented demand for silver eagles.

The coins will not carry an “S” mint mark to distinguish them from silver eagles struck at the Mint’s other facility in West Point. However, 500-coin green monster boxes will leave the San Francisco facility with labels indicating where they were struck. Most collectors seem to feel, as do I, that the coins should carry an “S” mint mark.

NGC announced on June 7 that it will be certifying silver eagles that were struck at San Francisco and will note on the label “2011 (S)” with the “S” in parentheses because of the lack of a mint mark. The labels will also state “Struck at the San Francisco Mint.” Because only the monster box labels provide evidence of where the coins were struck, NGC stated that only bulk submissions still in their original sealed shipping containers from the San Francisco Mint will be eligible for the new designations.

So far PCGS has not indicated whether it has plans to label silver eagles struck at San Francisco, but I would not be surprised by an announcement that it will be doing the same as NGC. That is what happened earlier this year when NGC designated five-ounce America the Beautiful silver coins with prooflike and deep prooflike surfaces, and then PCGS followed suit. The same thing happened with the 2009 Ultra High Relief double eagles.

It does not appear possible to estimate the number of coins struck at San Francisco since only some portion of the monster boxes will be sent to NGC for grading and labeling with the “(S)” notation. Potentially millions of others will remain ungraded, or will not be submitted as bulk submissions, and will be indistinguishable from other 2011 silver eagles.  So as far as I can tell, there will be no way to arrive at anything close to an accurate estimate of only those coins struck at San Francisco, unless the U.S. Mint releases specific figures. Moreover, I doubt the number of such coins will be small, so they are not likely to be particularly low mintage coins.  So far, the Mint has indicated it will be able to produce several hundred thousand coins per week in San Francisco.

I suspect that many collectors, especially those who are skeptical about third party grading in general, will question the value of the new designations. Moreover, I do not think it makes sense to pay a premium for such coins over those struck at other Mint facilities. But some collectors will be intrigued and others will want one for the sake of completion. Whether “S”-labeled coins are really necessary for a complete silver eagle set is debatable, and I am curious how other collectors feel about this. Do you agree with NGC’s decision? Even if you oppose it, do you believe that these coins will ever carry a premium over other 2011 silver eagles?

Last year public demand for silver eagles broke all previous records, and close to 35 million coins were sold. Demand for these coins, and for physical silver in general, continues to remain very strong, and the Mint has had trouble in recent months providing adequate supplies to Authorized Purchasers. Premiums continue to run high on these coins, with the average current retail price being in the $43-45 range at a time when silver is approximately $37.  At the moment, premiums charged by most coin dealers for  2011 America the Beautiful five-ounce silver bullion coins are less per ounce than those charged for the substantially more common silver eagles.

In addition, most AP’s and retail coin dealers are currently selling the coins with delivery delayed for about one month, although APMEX of Oklahoma now has the coins in stock for delivery next week. Dealers have been paying higher than usual premiums over silver content when buying from the public to help replenish their inventories because of delays in U.S. Mint deliveries. APMEX’s current buy price is about $2 over spot, and Provident Metals of Texas pays the same amount, whereas normally dealers only pay about spot for these coins unless supplies are tight, as they are now.  Earlier this spring, when supplies were even more constrained than they are now, dealers were paying as much as $3 over spot.