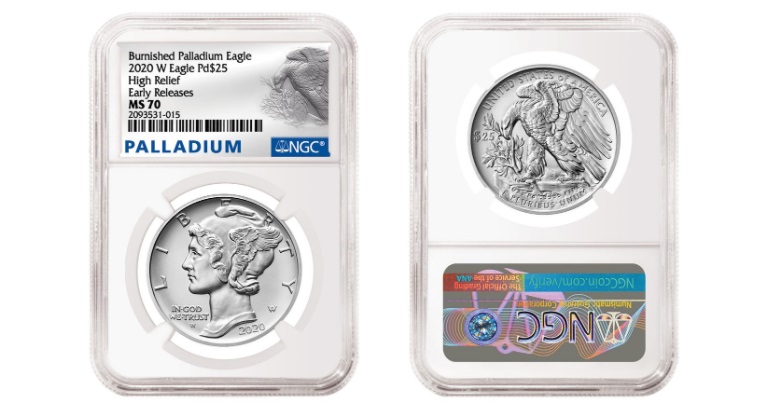 This year, the Mint is releasing only 10,000 Palladium Eagles in a new Uncirculated finish. Special submission instructions must be followed. See the “Submission Instructions” section of this article.

On September 24 at noon (EDT), the U.S. Mint is releasing the 2020-W American Palladium Eagle in a new Uncirculated finish. Only 10,000 of the coins are being minted, which is the lowest mintage of any Palladium Eagle to date.

Numismatic Guaranty Corporation (NGC) is offering its Palladium Eagle special label for no additional charge to create a distinguished presentation for these historic coins. For coins submitted within the first 30 days of release, the popular NGC Early Releases and First Releases designations are also available.

Palladium Eagles were first released in 2017 as a one-ounce bullion coin. In 2018, a Proof version was produced, followed by a Reverse Proof in 2019. The coins are composed of one troy ounce of .9995 fine palladium.

All of the Palladium Eagles showcase high relief designs by Adolph Weinman, whose work in the early 20th century produced some of America’s most admired coins. A reincarnation of Weinman’s Winged Liberty from the Mercury dime is featured on the obverse, and the powerful eagle on the reverse is from the American Institute of Architects gold medal.

The following designations are available for this coin:

The following labels are available for this coin:

NGC’s First Day of Issue designation and labels are available for select bulk submissions only. To qualify for First Day of Issue, coins must be purchased within one day of the first day that a mint makes a new coin issue available for sale and must be received by NGC or an NGC-approved depository within one week of the release date. NGC will require that the submitter provide adequate evidence (including purchase receipts) to demonstrate the date when the coins were purchased.