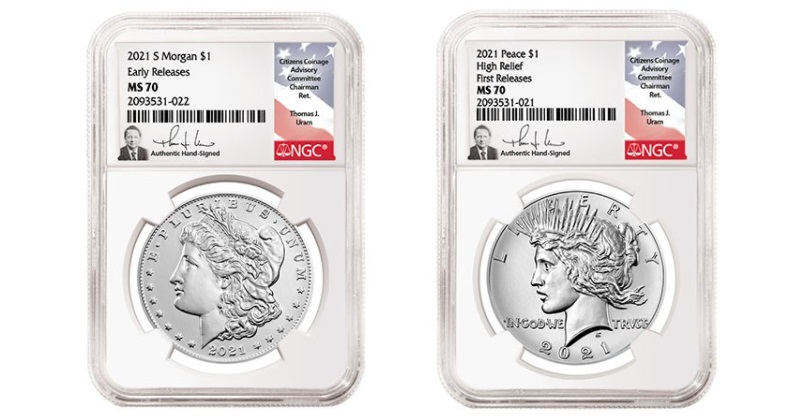 The NGC Thomas Uram Signature Label is seen with the 2021 Morgan and Peace dollars, which are the culmination of his dream to commemorate the 100th anniversary of a milestone in U.S. numismatic history. Hover to zoom.

Thomas J. Uram, retired chairman of the Citizens Coinage Advisory Committee (CCAC), has agreed to individually hand-sign certification labels exclusively for Numismatic Guaranty Corporation (NGC). The CCAC has considerable influence in U.S. numismatics because it was established by Congress to advise the Secretary of the Treasury on designs for coins and medals.

Uram, who is also president of the Pennsylvania Association of Numismatists and a previous member of the American Numismatic Association (ANA) Board of Governors, boldly led the initiative to pass the 1921 Silver Dollar Coin Anniversary Act (H.R. 6192).

“As a lifelong collector, it was a great honor to be a part of the 1921 Silver Dollar Coin Anniversary Act to commemorate this important moment in numismatic history,” said Uram. “I am proud to collaborate with NGC to highlight these fantastic coins.”

“NGC is pleased to offer collectors a special way to highlight silver dollars and other coins rich in numismatic history through the Authentic Hand-Signed labels program,” said Mark Salzberg, NGC senior grading finalizer. “Thomas Uram is a lifelong numismatist who has made an unquestionable impact on the hobby, and we are honored to feature his signature on NGC certification labels.”