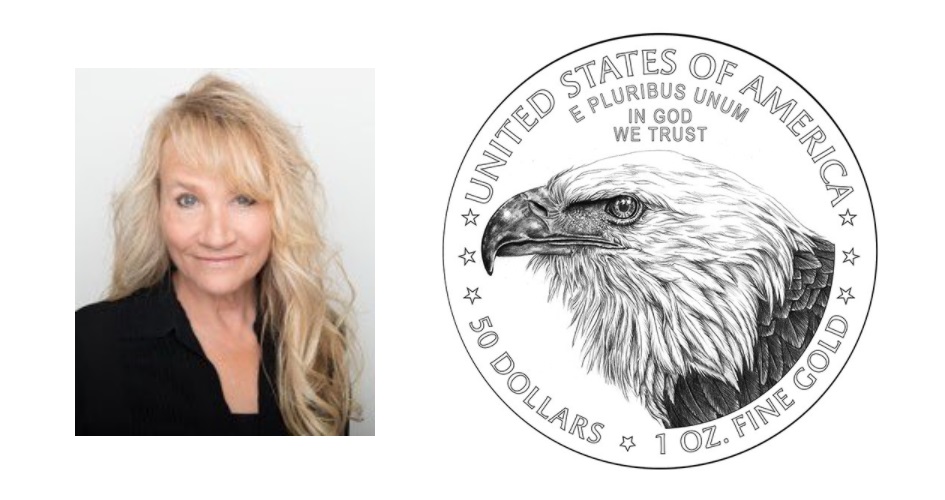 Since 1986, when the first American Gold Eagle was released, it has featured Augustus Saint-Gaudens’ revered Liberty on the obverse and a family of bald eagles in a nest on the reverse. To coincide with the 35th anniversary of both the Gold Eagle and Silver Eagle, the U.S. Mint is introducing new reverse designs for each coin in 2021. Norris’ dignified portrait of a bald eagle is the new Gold Eagle reverse.

To choose the Eagles’ new reverses, the U.S. Mint conducted a sweeping competition that began with more than 30 possible designs. Norris’ design was selected for the Gold Eagle from this expansive field of candidates.

To create her strong yet sensitive portrayal of the national bird, Norris drew on her experience as a raptor handler, where she was able to see birds of prey up close. Indeed, her design represents perhaps the most realistic and intimate look at a bald eagle that the U.S. Mint has ever featured on a coin.

The eagle is shown in profile, with its strong, curved beak and thick plumage rendered meticulously. His gaze is at once intense and impenetrable, conveying, as Norris describes, “pride and wisdom passed down through generations of time.” Above the eagle’s portrait, inscriptions on the coin include UNITED STATES OF AMERICA, E PLURIBUS UNUM, and IN GOD WE TRUST.

Norris recently joined the U.S. Mint’s Artistic Infusion Program (AIP), with the Gold Eagle reverse being her very first coin design. Her background is in graphic design, illustration, and fine art, and she is currently a graphic designer at the University of Arizona. A passionate nature lover, she strives to capture the fascinating details of plants and animals in work, as she did very successfully with the new Gold Eagle reverse.

“Upon joining the AIP and learning there would be a contest to select the new reverses of the American Eagle coins, I saw an opportunity to bring my own appreciation and experience of nature, and raptors in particular, to a very important coin,” explained Norris. “I am excited to partner with NGC to take the personal connection that I feel with this coin one step further by signing certification labels.”

“I am thrilled that Jennie Norris will be signing American Gold Eagle certification labels exclusively for NGC,” said Mark Salzberg, NGC chairman and grading finalizer. “What an achievement that her very first U.S. Mint coin will be the highly anticipated 2021 Gold Eagle, and what an honor for us to offer her autograph to collectors.”

American Gold Eagles certified with the NGC Jennie Norris Signature Labels will be made available through select retailers. To learn more about the NGC Authentic Hand-Signed Labels program, which includes many numismatic luminaries, click here.

NGC has long been the leader in American Eagle certification, with more than 1.6 million Gold Eagles and 11 million Silver Eagles graded. As the 2021 Eagles are released, NGC will offer many exciting ways to highlight both the original and the new Eagles. Stay tuned for details.