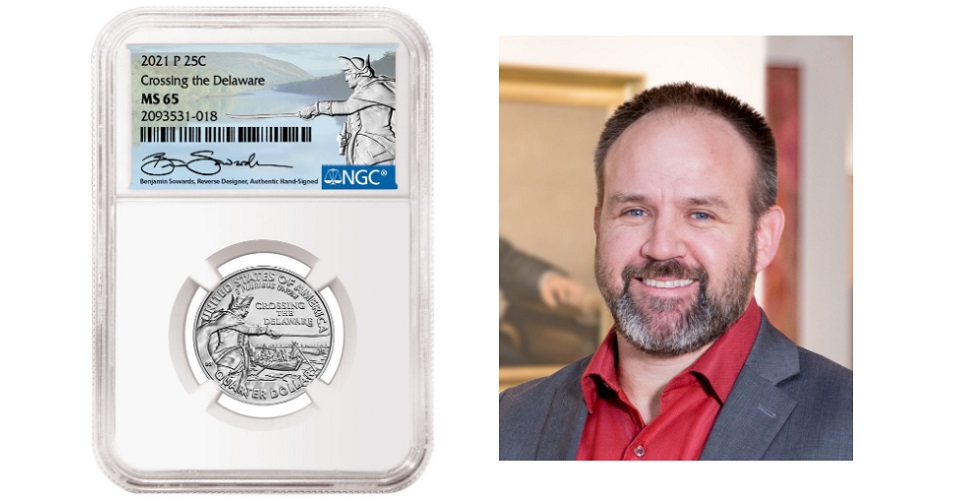 Numismatic Guaranty Corporation (NGC) is delighted to announce its latest exclusive Signature Label partnership, with artist and illustrator Benjamin Sowards. As a member of the U.S. Mint Artistic Infusion program (AIP), Sowards has designed several U.S. coins and medals, including the reverse of the highly anticipated 2021 Washington Crossing the Delaware quarter.

Sowards’ design portrays the historic moment when Washington commanded 2,400 troops and artillery across the ice-packed Delaware River on December 25, 1776. The future president is in the foreground holding a smallsword and a Dutch telescope as he directs a boat filled with troops. Washington’s expression is unwavering, ready to lead his men to the resounding victory at the Battle of Trenton, which rekindled support for the Revolutionary War. Sowards’ initials appear to the left of Washington.

The latest quarter from the U.S. Mint is being offered as part of the 2021 Proof Set in March; circulation issues are scheduled to be released in April. It follows the State Quarters Program and its successor, the America the Beautiful Quarters Program. This is the first time in over 20 years that the U.S. Mint is releasing a quarter not dedicated to one of these two programs.

Sowards’ artistic style is predominately realistic with an air of fantasy, and his work can be found in private and public collections around the world. Sowards is also a professor at Southern Utah University, where he has led the Illustration Program since 2001. He began designing for the U.S. Mint with the reverse of Jacqueline Kennedy’s First Spouse gold coin and medal, which was released in 2015.

Sowards went on to create the obverse design for Nancy Reagan’s First Spouse gold coin and medal in 2016. He also designed the obverse of the 2016 Mark Twain commemorative $5 gold coin, which features the author’s portrait with a playful and inquisitive demeanor, effectively capturing Twain’s imaginative and satirical writing style.

“To join the talented U.S. Mint coin designers, engravers, and sculptors in the NGC Signature Label program is an incredible distinction,” said Sowards. “It was exciting to be involved with the creation of the 2021 Washington Crossing the Delaware quarters, and I am glad to offer collectors my signature.”

“NGC is thrilled to add Benjamin Sowards to our industry-leading Signature Labels program,” stated Mark Salzberg, NGC chairman and grading finalizer. “His design for the new quarter perfectly captures an iconic moment in history, and his Signature Label offers a personal connection to collectors.”

The U.S. Mint commemorates the anniversary of the end of World War II