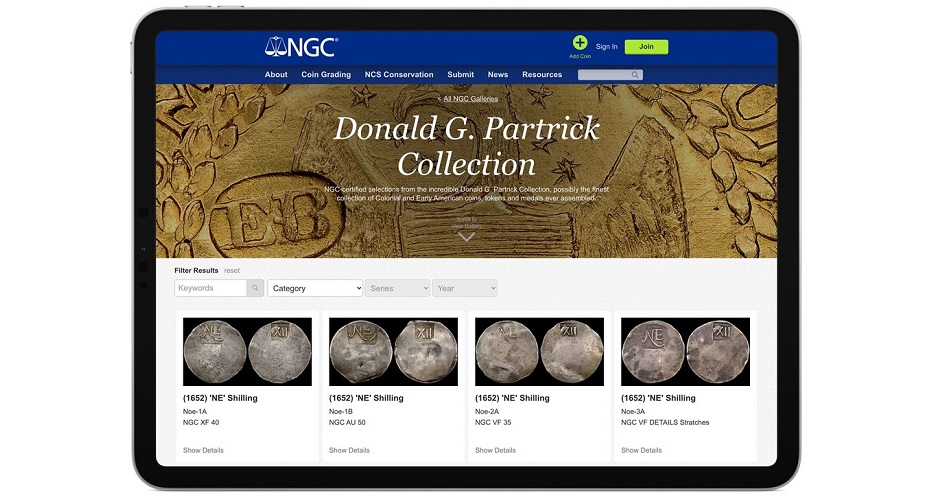 Numismatists can easily explore stunning, high-resolution images of the greatest collection of Colonial and early U.S. coins ever assembled.

Numismatic Guaranty Corporation (NGC) has updated its image gallery of the Donald G. Partrick Collection with more than 1,000 additional coins, tokens, and medals, giving numismatists the opportunity to explore this unparalleled collection of Colonial and early U.S. coins. The Partrick Collection, entirely certified by NGC, includes some of the greatest rarities in all of numismatics, including two Brasher doubloons, the first gold coins struck in the newly independent United States.

NGC has also released a video showing the Brasher doubloons and other highlights in a format that allows viewers to better appreciate the rarity and quality of these extraordinary coins. To view the video, click the play button below or click here.

“I feel incredibly fortunate to have been able to examine these rare and historic coins up close,” said Mark Salzberg, NGC chairman and grading finalizer. “I hope that this image gallery and video give other coin collectors the same feeling of awe and excitement that I had when I graded these phenomenal rarities.”

The first 350 coins from the Partrick Collection were sold in 2015, realizing nearly $26 million. The remainder of the collection will be offered over the next year by Heritage Auctions, starting with a sale of Connecticut Coppers in October, closing on November 1. For the latest updates on the Heritage auctions, please regularly visit here.

NGC’s Partrick Collection image gallery now contains stunning, high-resolution images of more than 1,400 coins searchable by type and keyword. The Patterns category, for example, features 12 incredibly rare patterns (or proposed coins) with a date of 1792, the year that Congress authorized the U.S. Mint and U.S. coins. Viewing them together provides an incomparable view into the young nation’s earliest attempts at a national coinage and the ideals and themes that it represented.

View these coins and more from the Partrick Collection here.

As the Partrick Collection is offered for sale over the next year, make sure to check for additional updates online and subscribe here.

For the latest updates on the Heritage auctions, please regularly visit the website of Heritage Auctions.