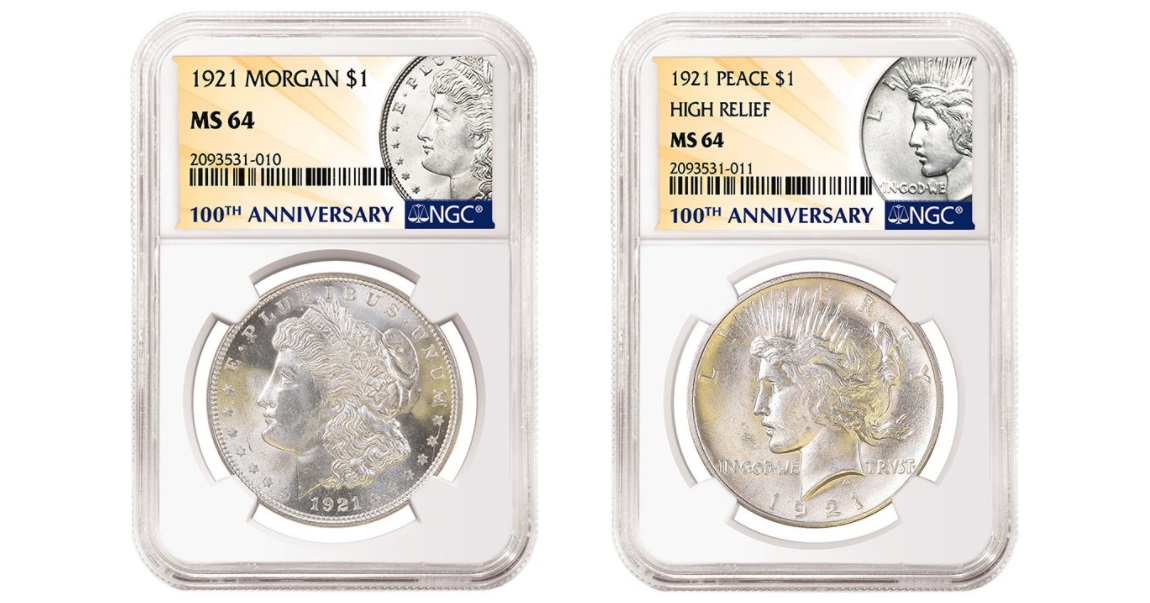 The labels perfectly complement two of the most important and popular coins in American numismatics.

Numismatic Guaranty Corporation (NCG) is celebrating the 100th anniversary of the 1921 transition from the Morgan dollar to the Peace dollar with two new special labels: The NGC Morgan Dollar Centennial Label and the NGC Peace Dollar Centennial Label. These attractive labels are available for bulk submissions of 1921 Morgan and Peace dollars, and will be offered for the highly anticipated 2021 Morgan and Peace dollars being released later in the year.

Minted from 1878 to 1904 and again in 1921, the Morgan dollar is among the most prominent American coin series. Dubbed the “King of 19th Century Coins,” the fact that the Morgan dollar was produced again 20 years into the 20th century is a fascinating twist of numismatic fate.

The same year, however, there was a call for a new silver dollar that celebrated the end of the war and America’s victory. A competition was held to create a coin design emblematic of peace, and the new representation of Liberty — serene and modern-looking compared to the classic Greek profile of the Morgan dollar — was produced from 1921 to 1928 and again from 1934 to 1935.

The NGC Morgan Dollar and Peace Dollar Centennial Labels complement the coins by conveying the industry and optimism of the American spirit. They are available for all bulk submissions of 1921 Morgan dollars and Peace dollars. An oversize version is available for multi-coin sets.

The labels will be offered for the 2021 Morgan and Peace dollars when they are released by the U.S. Mint later this year.