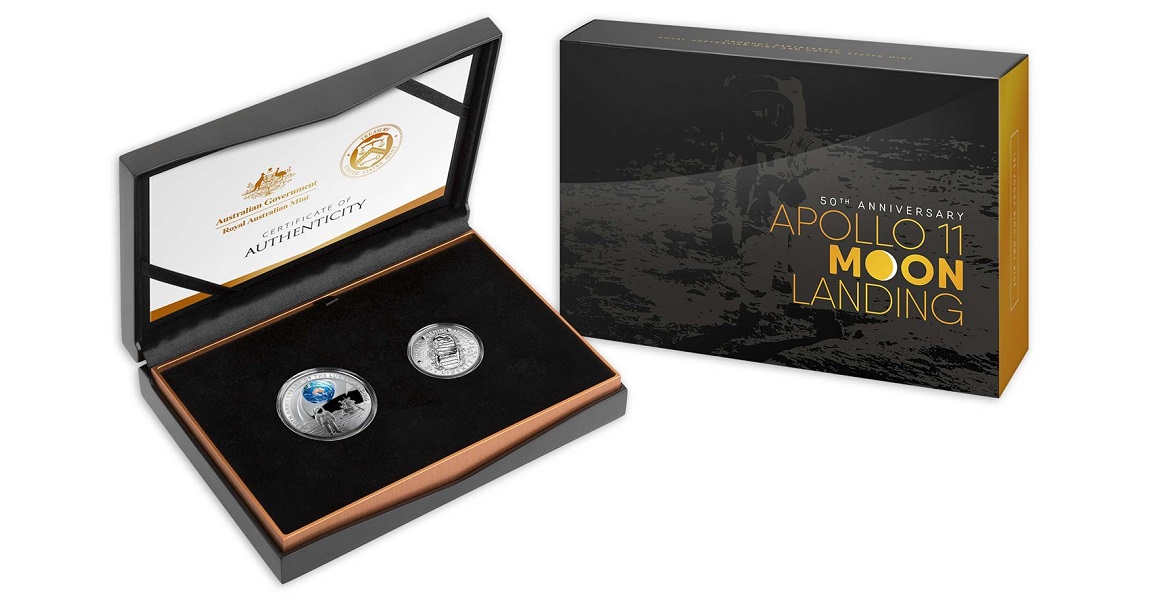 A special NGC attribution is available to recognize this historic Royal Australian Mint release. Submissions of the coins must be received in the sealed Mint shipping box to be eligible for the set pedigree. Special submission instructions must be followed. See the “Submission Instructions” section of this article.

The Royal Australian Mint has begun sales of the 50th Anniversary of the Lunar Landing Two-Coin Set, which will begin shipping in June. It combines an Australian Proof silver $5 and a U.S. Proof clad half dollar that each celebrate the historic mission to the moon.

NGC is celebrating the coins in this set with a special designation of U.S. & Australia Moon Landing Set, which is provided for no additional fee. (Scroll below to see detailed submission instructions.)

NGC’s default label for these coins is its Astronaut Scholarship Foundation (ASF) Label, which benefits an organization that provides scholarships to outstanding college students in science, technology, engineering, and mathematics. This label carries an automatic $5 fee; a royalty will be paid to the ASF by NGC for each label used.

The Australian $5 is curved and struck in one ounce of .999 fine silver. It features a scene portraying the Apollo 11 landing, in which Neil Armstrong took humanity’s first steps on the moon. At the top is a colored image of the Earth above the lunar horizon, with Australia clearly visible. On the reverse is a satelitte dish and some of Armstrong’s first words to mission control from the surface, including his famous “one giant leap for mankind” phrase, as well as a description of the landing site.

Due to the orientation of Earth at the time of the Apollo 11 landing, the transmissions from the Moon went first to a NASA station in southeast Australia before being sent to a global audience watching breathlessly on TV.

The U.S. Proof clad half dollar is noteworthy for its curved design. The obverse depicts a bootprint on the lunar surface while the reverse shows a view of the moon from an astronaut’s helmet.

The following designations/attributions are available for the coin in this set:

The following labels are available for the coins in this set:

NGC’s First Day of Issue designation and labels are available for select bulk submissions only. To qualify for First Day of Issue, all coins must generally be received by NGC or an NGC-approved depository within one day of the first release of a new coin issue.