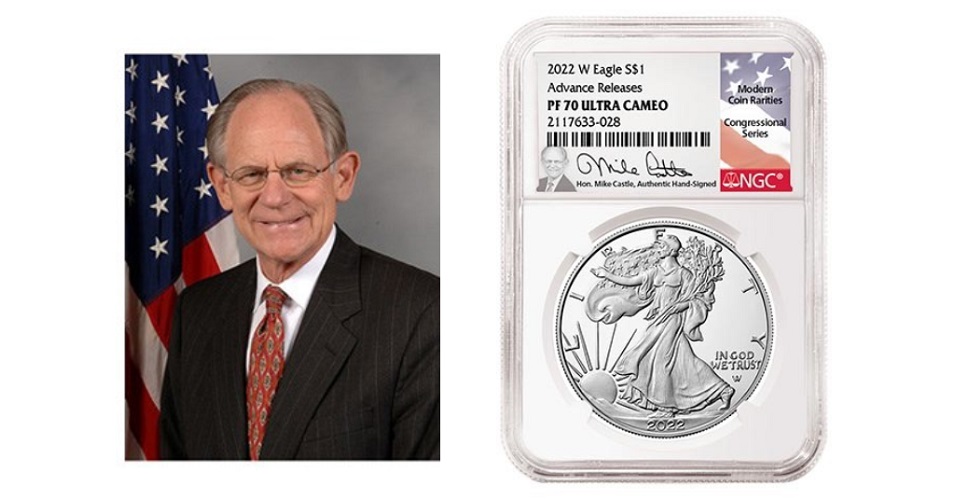 NGC has new certification labels for the lawmaker behind the State Quarters program, which sparked fresh interest in coin collecting.

Numismatic Guaranty Company (NGC) is proud to announce an exciting new Authentic Hand-Signed label that recognizes the contributions to numismatics made by the Honorable Mike Castle, who served nine terms as a member of the U.S. House of Representatives.

Castle was Delaware’s at-large representative in the House from 1993 to 2011, after serving two terms as governor. While in Congress, Castle wrote and/or sponsored the bills that created the 50 State Quarters program, the Sacagawea dollar, the Presidential Dollar Series, the American Platinum Eagle, the America the Beautiful Quarters Program, and a number of modern commemoratives — becoming known as “The Coinage Congressman.”

It is estimated that 150 million Americans — half of the country’s population at the time — became casual coin collectors because of the 50 State Quarters Program, which raised nearly $7 billion in profit for the federal government. Many would become more serious modern coin collectors, which had a transformative effect on the hobby and propelled modern coin collecting into the juggernaut that it is today.

The State Quarters series started in 1999 with Delaware, the first state admitted into the Union and Castle’s home state. By the time the Delaware quarter was released, however, Castle had already begun to leave his mark on U.S. coinage.

The first numismatic legislation that Castle sponsored was the Commemorative Coin Authorization and Reform Act of 1995, which created the American Platinum Eagle bullion coin.

In his last piece of numismatic legislation, Castle created the America the Beautiful Quarters Program to begin after the conclusion of the State Quarters program. Significantly, this act called for the creation of a five-ounce silver bullion coin, the largest silver coin ever created by the U.S. Mint.

The new Congressional Series label featuring an image of Castle and his authentic signature will be available soon through select retailers.