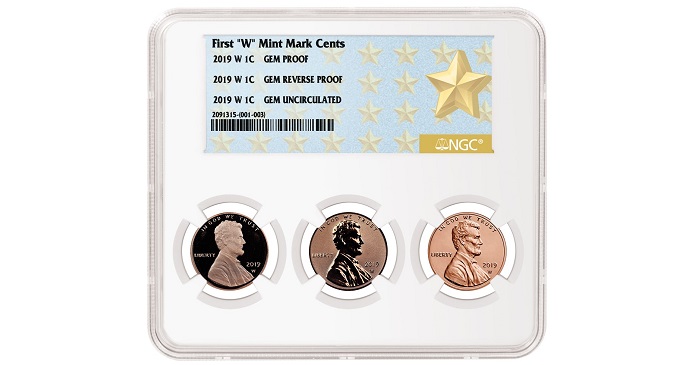 Bulk submitters can order this special holder for attractive and convenient display.

The Numismatic Guaranty Corporation (NGC) has created a version of its Small Multi-Coin Holder to encapsulate three U.S. cents side-by-side in a single holder. The attractive holder is ideal for the three different 2019-W Cents being issued by the U.S. Mint.

This is the first time that the U.S. Mint has struck cents with the “W” mint mark of the West Point Mint, which typically strikes bullion and commemorative coins. The cents are struck in three different finishes and included as premiums with various U.S. Mint sets:

NGC’s new holder features its popular EdgeView design, which enables the majority of the coin’s edge to be viewed. All three coins are described on a single label.

This special holder is available only for bulk submissions of at least 50 sets. An additional $5 fee per holder applies. Contact Scott Heller at 941-360-3990 or  or Miles Standish at  or 949-922-0515 for more information. Ask about encapsulation options for other US cents.