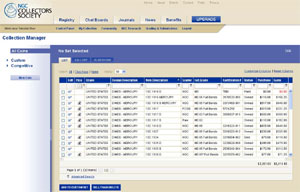 I’ve received emails and read advertisements about NGC‘s new “Collection Manager,” a tool associated technologically with its set registries while being hyped as new software.

The emails proclaim, “Michael Bugeja, managing your collection just got easier.” My response? Not so much.

The advertisements declare, “You spoke. NGC listened.” My response? Now it should learn to program.

I’m writing today as much in my capacity as journalism school director as numismatist. I’ve dealt with software for decades, buying, vending and even designing virtual reality prototypes with others at my science-oriented institution.

NGC’s Collection Manager is cumbersome and too detailed for most users with little or no experience with this company.

The advertisements state that collectors wanted a Web-based software able to be accessed anywhere 24/7 that organizes collections and allows them to be shared with others. Excuse me, but that’s called a set registry, and because hundreds of them already are registered on the NGC site, Collection Manager has to operate technologically under the registry protocol, format and design.

That’s why I consider it an add-on rather than stand-alone software. But at least the latter could be designed and formatted to give the impression that it is.

If you maintain an NGC set registry–something I decided against, again because of the cumbersome software (opting for PCGS)–you probably will have little trouble adapting to Collection Manager, as it will function more as that add-on allowing a greater range of choices. You’ll be able to download your inventory into custom sets, create wish lists, and list raw coins, for example.

If you are lured by the advertisements, with no prior NGC experience, you’ll register and gain some by trial and error, mostly trial.

You’ll begin by creating a custom or competitive set. Problem: You have to figure out how to do this because tabs in the left margin contain no explanatory text: ALL COINS, CUSTOM, COMPETITIVE. Ideally, you should be able to run your mouse over the tab without clicking and learn what it is and how to use it.

“All Coins” is your inventory, and it should inform users to add coins before using. I mistakenly thought this would be a drop-box to collectible series such as Morgan dollars. (That’s what “Competitive” is, by the way.) “Custom” is for sets you design, and “Competitive” really is the set registry.

So I wasted time by creating a custom “My Morgans” set and then re-creating a duplicate on the “Competitve” tab. I tried to delete my custom set and couldn’t figure out how to do that because the design is not formatted to one screen. You deduce eventually that you might scroll down to find the delete key, which I did after about another five wasted minutes. Then I tried to delete the set, only to be told in red below the format window, “You must select at least one collectible.” Well, I had none and now was in a techno loop.

The help button was no help because it is not searchable. The page only carries video tutorials. So label it “Tutorials” and add a searchable database including “how to delete a set.” And while you’re at it, any link such as “Help” or “Tutorial” should open a new tab or window. NGC’s doesn’t, meaning you risk losing partially filled data and cannot have access to two windows simultaneously so as to apply help step-by-step.

Adding coins is NOT easy, as the videos proclaim. (There is a separate video on how to add coins in the help section, indicating the complexity.) You have to figure out how to do this on your own because there are no horizontal tabs dedicated solely to Collection Manager. NGC needs to format an entire page if indeed this is a stand-along software, such as you might find in a PCGS personal set registry. Instead, you must figure out that Collection Manager is formatted as a main tab at the top of the screen with a drop box next to other primary tabs such as “Control Panel” and “Grading & Submissions.”

Under the dropbox “Collection Manager” tab, you eventually find “add a coin.”

Unfortunately for me, the first coin I wanted to add was a raw 1889-O Morgan. Unfortunate, because the when I typed 1889-O, that coin came after 20 other series and variety types of coins with that year. I was instructed to “keep searching” as the window only allows 20 descriptions per click. The software doesn’t explain “how to keep searching.” Rather, you stumble on to “create own” with a complex data screen as if you’re trying to list a Judd Pattern.

For Pete’s sake, program this thing with a simple year, mint mark and denomination or add more drop-downs in the window, rather than cutting it off at 20.

Worse, there’s no way to get back and start again without going to the “Collection Manager” tab at the main-bar dropdown top. The space to the left of the screen is wasted, showing a “Find Members” tab when again that area should be used for the manager, indicating once more that this is formatted as an add-on rather than stand-alone software.

I could go on with smaller demurs, such as the software throwing up window after window for different descriptions and grades rather than being formatted in the same window so you don’t have to navigate away from what you’re doing and then back again.

In sum, to use this software the way it is currently designed you have to be technologically skilled and an experienced numismatist understanding precisely what you own or are looking to own or sell, including grades and varieties for raw coins, and then how to figure out the program to include those data.

I really don’t have much to praise about Collection Manager. I think NGC went to press before the bugs were ironed out. One gets the impression that this wasn’t beta-tested with beginners who have no experience on the NGC site. That’s a major IT error because the marketing is meant to allure precisely that kind of individual.

All this new application did was remind me why I patronize PCGS because that company is much more savvy technologically with its site programmed to do the heavy digital lifting.