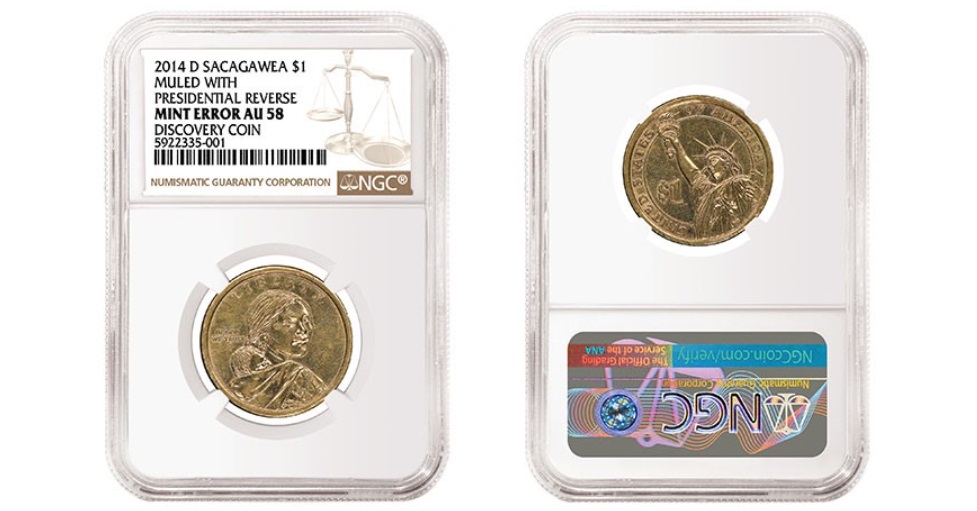 Numismatic Guaranty Corporation (NGC) has certified the first known mule of a Sacagawea dollar and a Presidential dollar. This incredible error, which paired a Sacagawea dollar obverse with a Presidential dollar reverse, was struck in 2014 at the Denver Mint. It is now graded NGC Mint Error AU-58 with a notation of Discovery Coin to recognize its important place in numismatic history.

The edge of this mule sheds some light on its history: It bears the year 2014 and the “D” mintmark of Denver. That year, the Denver Mint struck 5.6 million Sacagawea dollars and over 15 million Presidential dollars, almost equally distributed between Warren Harding, Calvin Coolidge, Herbert Hoover, and Franklin Roosevelt.

Any 2014 Sacagawea obverse should have been paired with that year’s Native Hospitality reverse, which depicts a pair of Native Americans offering food and a peace pipe. Instead, this mule features the Statue of Liberty reverse from the Presidential dollar series.

The person who submitted this Sacagawea-Presidential dollar mule to NGC reported making the discovery in a mixed bag of dollar coins obtained from a bank in 2019. It was eventually submitted to NGC for certification.

The industry-leading authentication and grading team at NGC includes David J. Camire, an authority on mint errors who is the co-author of 100 Greatest U.S. Error Coins. In addition to being an NGC Grading Finalizer, Camire serves as President of Numismatic Conservation Services (NCS), an affiliate of NGC.

“This is yet another great find by a collector and an important reminder for the coin collecting community that astonishing discoveries are still being made,” Camire said. “Today, the U.S. Mint uses technology and procedures that make it highly unlikely for mint errors not only to be produced, but also to escape into circulation. When they do, they become highly collectible and the NGC grading team has the expertise and resources to authenticate rare mint errors like these. Now, the hunt is on to see whether additional specimens can be found. Happy hunting!”