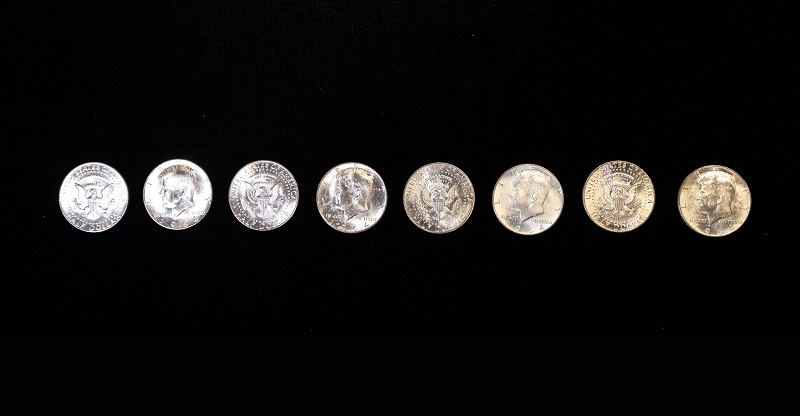 A few of the coins from the bag. Hover to zoom.

RCTV is a leading creator of numismatic content for television. It was co-founded by Rick Tomaska, author of six numismatic books focusing on Franklin and Kennedy half dollars, and Jack McNamara, the company’s senior coin buyer. 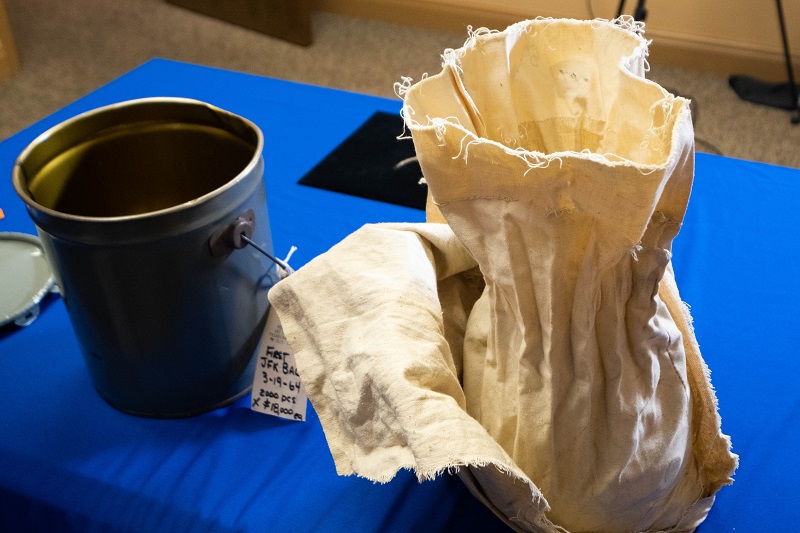 The canvas bag after it was removed from the metal bucket and unsealed. 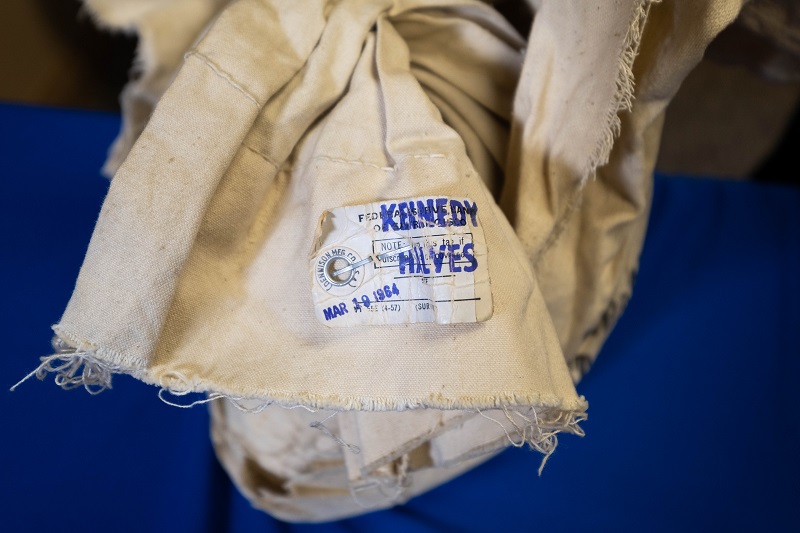 “When my phone rang and someone said he had this original Federal Reserve Bank bag dated March 19, 1964, five days before the coins’ official release date, my heart literally stopped beating for a second with simple disbelief,” recalled Jack McNamara. “I knew I had to do my research and verify the facts. Once I did that, I knew RCTV had to own this piece of numismatic history and bring it to our loyal television viewers and customers.” 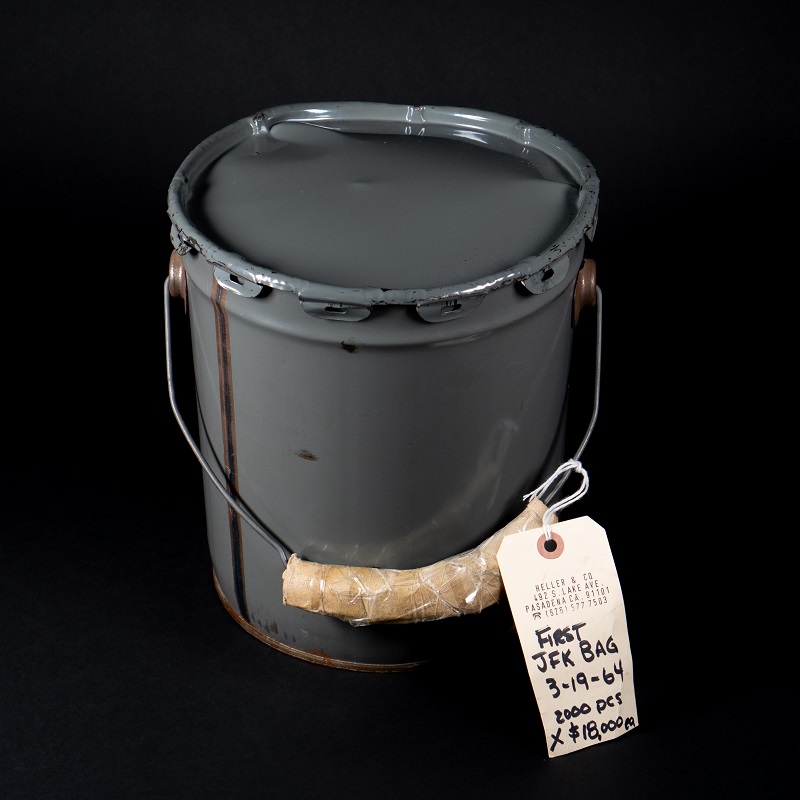 NGC received the bag of First Day of Issue 1964-D Kennedy half dollars from RCTV still sealed inside this metal bucket.

NGC received the bag of 1964-D Kennedy half dollars from RCTV still sealed inside a metal bucket. Salzberg, who has previously examined several sealed bags of 1964 coins, opened the bucket to find a light tan canvas bag stamped with “American Trust Company.” A tag was stapled to it with the text “Federal Reserve Bank of San Francisco” printed in black ink and “Kennedy Halves, Mar 19, 1964” stamped in blue ink. 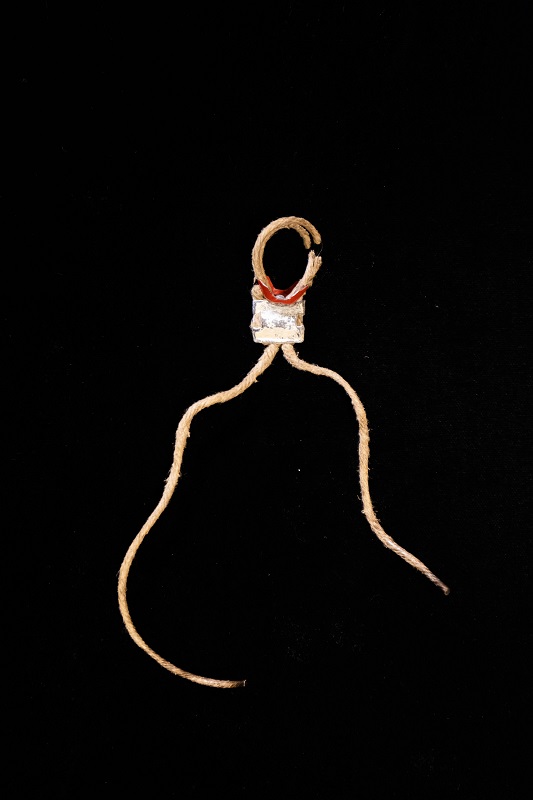 The label stapled to the bag and the string with the metal seal after it was cut.

The bag was tied shut with a string crimped tight with a metal seal. Salzberg cut the string to find the bag still sewn shut with a line of stitching. The presence of both seals indicated that the bag was original and untouched.

“In my 40 years as a professional numismatist, I have had the opportunity to examine several sealed bags of 1964 cents and nickels, but I had never seen a bag of 1964 Kennedy Half Dollars before this one,” Salzberg said. “This bag is truly a miracle of survival.”

Mint Director Eva Adams authorized work to develop the Kennedy half dollar within days of the president’s assassination on November 23, 1963. Chief Engraver Gilroy Roberts adapted the 1961 Kennedy inaugural medal for the design of the obverse and Assistant Engraver Frank Gasparro based the reverse design on the presidential seal.

The first Kennedy half dollars were struck in January 1964, and the first coins were released to the public on March 24, 1964. This bag was sealed and dated prior to the coins’ initial release, making them eligible for the prestigious NGC First Day of Issue designation.

The new Kennedy half dollars were immensely popular with collectors and the general public. When they were first released, banks quickly ran out of their supplies, making the existence of a still-sealed bag that much more extraordinary. Kennedy half dollars have endured in popularity since their initial release. Those dated 1964 are particularly prized by collectors for their status as the first year of issue and the last year with the famed 90% silver composition.

RCTV has said that these iconic First Day of Issue 1964-D Kennedy half dollars will be featured on “Rick’s U.S. Coins” show, which airs on DirecTV, Dish, Spectrum, U-verse and Frontier. You can also learn more about these stunning coins at the company’s website.