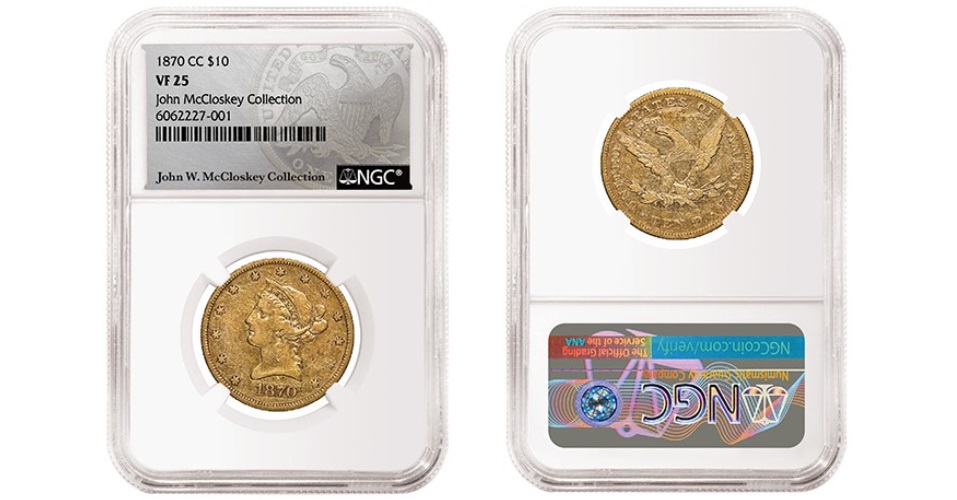 Early U.S. gold and silver rarities pedigreed to the renowned numismatic researcher are being offered in a January sale.

Numismatic Guaranty Company (NGC) is proud to have certified more than 1,000 coins from the prestigious collection of John W. McCloskey, a renowned numismatic researcher. Heritage Auctions is offering these coins in two sales in early 2022, including the FUN U.S. Coins Signature Auction, where 136 NGC-certified highlights of the collection will be offered on January 7.

The centerpiece of the collection is an 1870-CC Eagle graded NGC VF-25 (lot 4438). Struck in the inaugural year of the Carson City Mint, this issue is one of the rarest of all gold issues from that Nevada facility, which stopped issuing coins in 1893.

In addition to Carson City, the sale features coins from five other U.S. Mint facilities, including Philadelphia; New Orleans; Charlotte, North Carolina; San Francisco; and Dahlonega, Georgia. An 1856-D Quarter Eagle graded NGC EF-45 (lot 4417) is another highlight of the sale. Only a few dozen examples are believed to survive of this key state to the Liberty Head series. 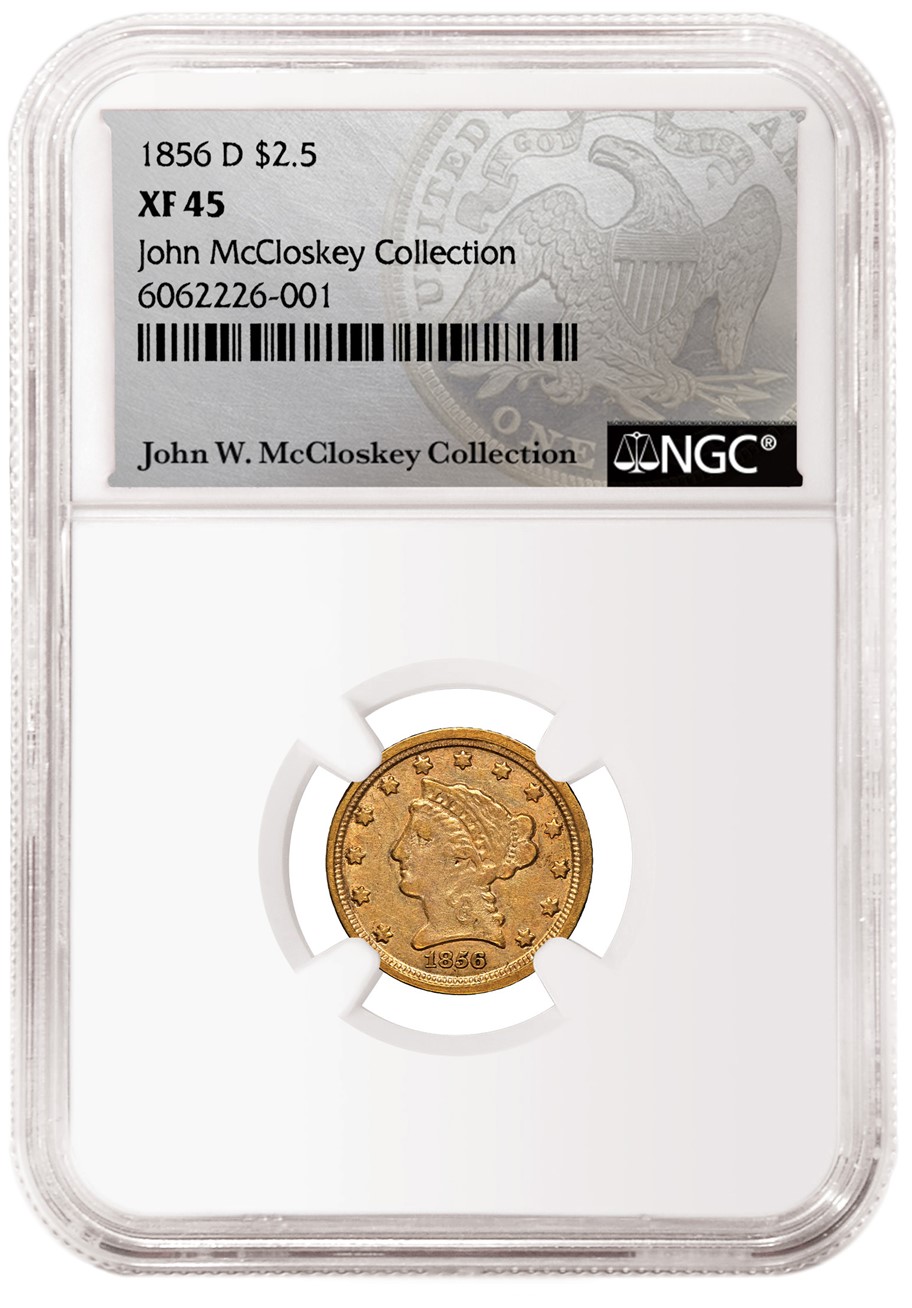 The top silver coin in the sale is an 1842-O Small Date quarter graded NGC AU-58 (lot 4326). This is a major variety in the series; only 24 examples are listed in the NGC Census, and this particular coin is the second-finest. The NGC Price Guide suggests this coin should easily realize five figures. 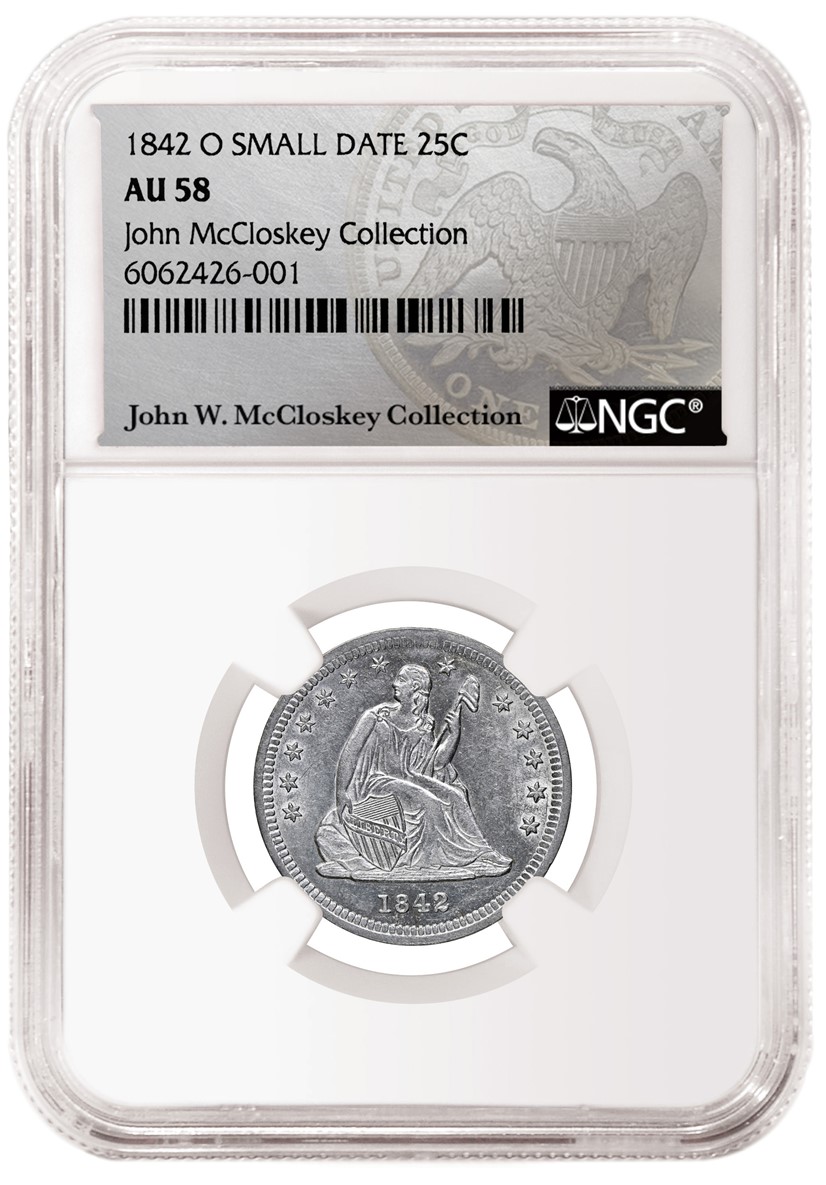 NGC is showcasing these and other McCloskey Collection coins in an image gallery on its website. To explore the gallery, click here.

McCloskey’s passion for seated coinage reportedly began in the 1950s when he began collecting and studying Liberty Seated dimes while still a teenager in high school. In 1973, he founded the Liberty Seated Collectors Club, which celebrates the rich heritage of American silver Liberty Seated coinage. McCloskey served as the elected president of the club as well as the volunteer editor of The Gobrecht Journal, which was the club’s periodical, for nearly four decades.

“John McCloskey generously shared his insight with the numismatic community,” said Mark Salzberg, NGC Chairman. “It was an honor for NGC to certify the coins from the McCloskey Collection, which he painstakingly assembled by leveraging his numismatic expertise.”

Other NGC-certified highlights in the January sale include: