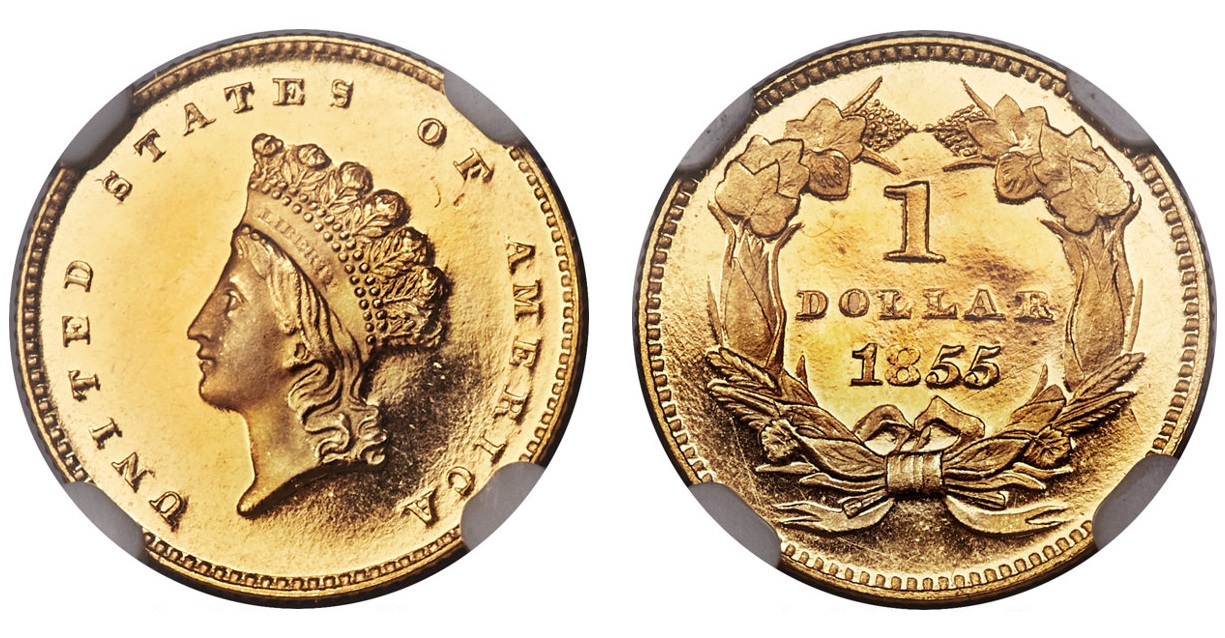 An 1855 gold dollar graded NGC PF-66★ Ultra Cameo realized $336,000. This coin is the finest of only seven known Proof examples of the Type Two gold dollar, which was struck only in 1854 through 1856. Type Two gold dollars have emerged as prime gold rarities over the years due to the short duration of the series, their challenging design to strike — with high points on the obverse directly opposed to the date and denomination on the reverse — and the continuing popularity of gold type collecting.

Another rare gold type coin that excelled in the sale was a 1796 No Stars $2.50 graded NGC MS-63. It realized $300,000 (USD). Part of an extremely low mintage of an estimated 963 coins, this quarter eagle is a significant example of a one-year type coin with two varieties. Interestingly, the No Stars variety is generally more desirable than the With Stars variety, even though fewer coins were minted With Stars in 1796.

An 1887 Morgan dollar graded NGC PF-68 Ultra Cameo also achieved a significant result. Only two 1887 Morgan dollars have received the Ultra Cameo designation from NGC, and this example is a full three points higher than the other. This finest-known specimen realized an exceptional $90,000 in the sale.

I am beyond thrilled to own this beautiful NGC-certified coin. It was the coin’s first appearance at auction, and believe me, I was ready!

We’re very happy for Rick, as this Morgan is the highest-graded by NGC for this issue. It’s always wonderful to see the exciting NGC-certified coins in the Heritage Auctions FUN Show sale. Congratulations to all of the successful bidders!