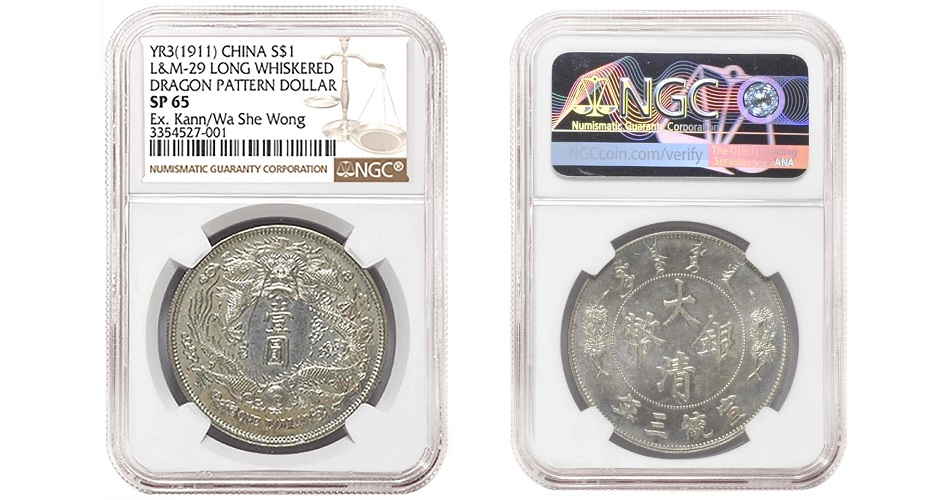 This China 1911 long-whiskered dragon pattern dollar graded NGC SP-65 is being offered at NYINC by Stack’s Bowers Galleries. It has an estimate of $400,000 to $500,000. Images by Numismatic Guaranty Corporation. Hover to zoom.

The coin is among the Stack’s Bowers Galleries offerings on January 17.

A coin certified by Numismatic Guaranty Corporation (NGC) might have the highest estimate of all of the coins being auctioned during the New York International Numismatic Convention (NYINC) in New York City in January. The NGC-certified vintage Chinese rarity will be offered by Stack’s Bowers Galleries and is estimated to realize $400,000 to $500,000.

The China 1911 long whiskered dragon pattern dollar L&M-29, graded NGC SP-65, was a prototype designed by the head of the central mint at Tientsin, Luigi Giorgi. It formerly was part of the Wa She Wong and Kann collections. It is called “long-whiskered” because a dragon on the obverse has whiskers that extend from near the rim to near the center.

Another NGC-certified coin with a six-figure estimate is a Great Britain 1692 Elephant & Castle five-guinea, graded NGC MS-62. The gold coin shows the portraits of King William III and Queen Mary II. Below the monarchs are small elephant and castle symbols, indicating that the gold used in the coin is from Guinea in West Africa. The coin has an estimate of $150,000 to $200,000.

Other top coins offered in the January 17 Stack’s Bowers auction include:

All estimates are provided by the auction house and are in USD.