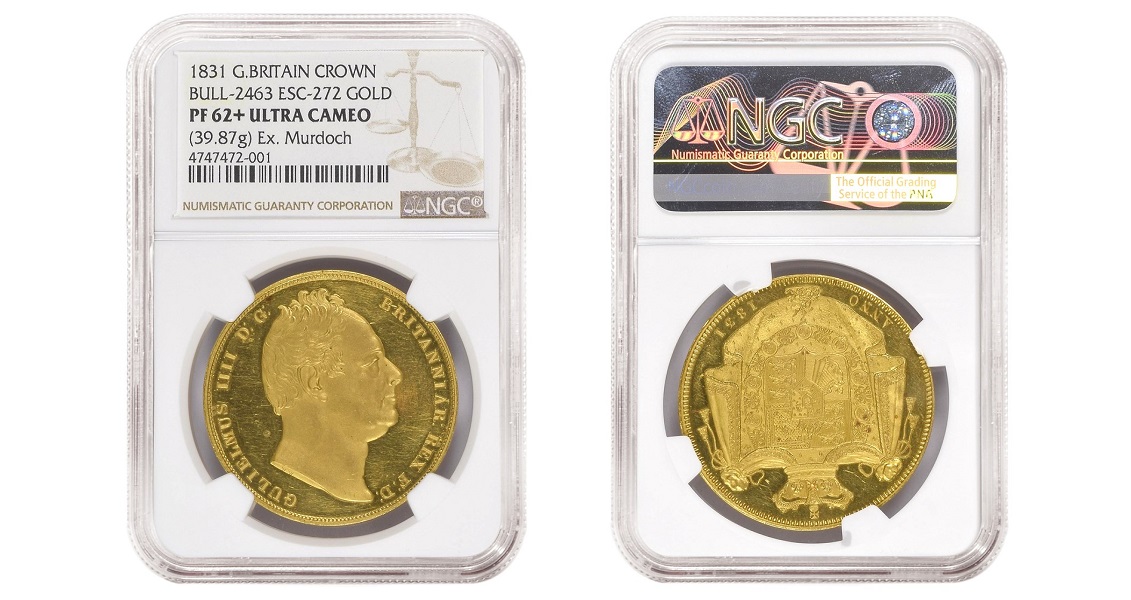 A number of gold and silver rarities graded by NGC will be offered January 14-15 in New York City.

Among the auction’s most impressive coins is a Great Britain 1831 gold crown graded NGC PF-62+ Ultra Cameo that has an estimate of $200,000 (USD). It shows William IV on the obverse and a coat of arms under a crown and mantle on the reverse.

The sale also includes an NGC-graded ancient coin with an estimate of $75,000. The Roman Empire (Hadrian) A.D. 117-138 gold aureus is graded NGC Ancients MS, Strike 5/5 and Surface 4/5, with Fine Style. It shows portraits of Hadrian on the obverse and Divus Trajan on the reverse. Hadrian was Emperor from 117 to 138 A.D., succeeding Trajan.

The fortification known as Hadrian’s Wall in what became England was built starting in 122 A.D. It runs 73 miles from the North Sea to the Irish Sea in northern England and is the largest Roman archaeological feature in the country.

Also estimated at $50,000 is a 14-coin Great Britain 1830-1837 Coronation Issue Proof Set. Among the NGC-certified coins is a sixpence graded PF-65, a half sovereign graded PF-64 Ultra Cameo, a shilling graded PF-64 Cameo, and a halfpenny and Maundy penny graded PF-64 BN.

An England 1681 gold five-guineas graded NGC AU-55 has an estimate of $30,000. The obverse shows Charles II, who was king of Scotland from 1649 until 1651 and of England, Scotland, and Ireland from 1660 to 1685. The reverse shows four cruciform coats of arms radiating from the center, each under a crown and with scepters in between.

Among the other particularly significant coins CNG is offering at NYINC are:

All estimates are by the auction house and stated in U.S. dollars.