Coin Update News has been at the forefront of recommendations about grading standards, many of which eventually have been adopted by major services. One such suggestion by Editor Michael Zielinski in this April 2010 post noted that modern coins should qualify for the Plus (+) designation. And now, NGC has announced that it, too, will allow Plus (+) designations on US modern coins.

Although not widely publicized, PCGS has been awarding plus signs to modern coins.

Many hobbyists, including me, are happy about the change and applaud NGC for making it.

You can read the NGC media release about the new policy by clicking here.

Essentially, NGC has expanded its plus service “to indicate a coin at the high end of its assigned numeric grade and approaching the quality requirements for the next grade.” Any US coin from 1792 to present will be eligible for the distinction, grading XF45 to MS68 or PF45 to PF68, excluding bullion issues and modern commemoratives struck from 1982 to present. Moreover, all eligible coins submitted to NGC for grading will automatically be evaluated for the Plus (+) designation. There is no additional fee or special service that must be requested. 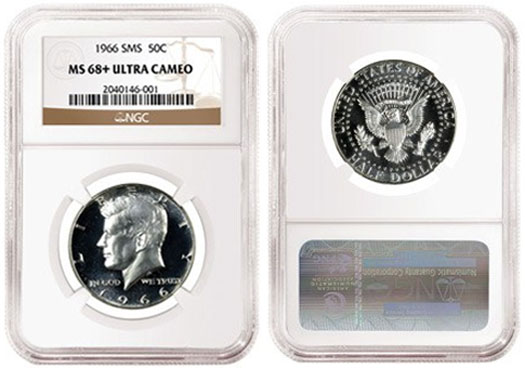 “NGC’s Plus (+) designation has been praised by collectors and dealers as the premier indicator of quality since it was launched in May 2010,” said Mark Salzberg, chairman of NGC. “Although we initially limited the designation to vintage US coins, careful analysis over the last three years led us to believe that most modern US coin series required a similar level of precision.”

Scott Schecter, NGC Vice President, said the new service will provide with reasonable accuracy a truer grade for certain coins and denominations. “Proof Franklins and SMS coins with a spot here or a faint hairline there, which might not be immediately visible in the holder, are examples of how a Plus grade might make a difference. “These are tiny flaws might have kept a coin from the next higher grade.

“I was unaware of the change,” said John Maben, CEO and owner of ModernCoinMart. Maben worked for eight years as an executive at NGC, including duties as a grader and finalizer. “If I was asked by NGC, I would say there is no reason not to do it.” MCM is the largest seller of modern coins and bullion on eBay. Maben predicted hobbyists will see the first Plus (+) designations on the MCM eBay store.

“I don’t see any reason you would want to discriminate against modern coins” by not awarding a Plus (+) designation, Maben added. “If you use a plus on older coins, why not modern? I’m completely on board with the new NGC policy.”

Maben noted there are distinctions between grades on any modern coin. “It’s not an exact science, of course,” he said, “but I see no reason why for example a coin might not be graded MS69+ because it just missed the MS70 mark.”

Here are some ending thoughts that might trigger some discussion by our viewers.

A case can be made for MS69 and PF69. Many hobbyists complain that they just can’t secure the top 70 mark on the Sheldon scale, no matter how many submissions they make for their modern coins. As for bullion, can you imagine how many resubmissions NGC would get if it allowed the Plus (+) designation for 1995-W PF69 American Silver Eagles? That particular bullion has been selling for tens of thousands of dollars as hobbyists vie for the highest set registries aligned with what they can afford.

What about modern commemoratives with a value spread between MS69 and MS70? Take the 1982-D 50C Washington Commemorative. NGC rated 80 MS69 but none MS70. An MS69+ would be an instant condition rarity.