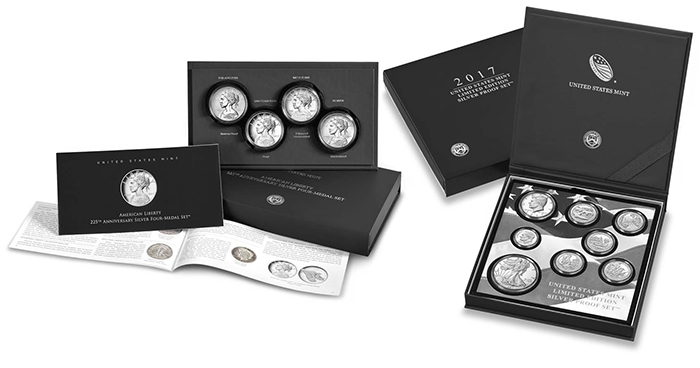 The U.S. Mint’s September schedule concluded with the release of the America the Beautiful–Ellis Island three-coin set, issued on the 14th. The next item up will be the 2017 Limited Edition Silver Proof Set (product code 17RC), which will be available for purchase at noon on October 5, 2017. Containing this year’s Kennedy half dollar, Roosevelt dime, American Eagle silver 1-ounce coin, and five America the Beautiful quarters, the sets are priced at $139.95.

Unlike most years’ Limited Edition Silver Proof Sets, this one is apt to sell out—and fairly quickly. Its American Eagle silver Proof coin is from the San Francisco Mint rather than the traditional West Point issue. Produced this year only, in honor of the Mint’s 225th anniversary, the S-Mint ASE Proofs made their first appearance in the 2017 Congratulations Set, whose 75,000 product limit sold out within two minutes of their release. As always, the annual Proof ASE coins are available for individual purchase, but they’re from the West Point Mint.

Combining the official final Congratulations Set sales of 74,898 with the maximum LESPS figure of 50,000 yields fewer than 125,000 of the 2017-S American Eagle silver Proofs on the market. Among all the regular (not Enhanced or Reverse) ASE Proofs, only one has a lower mintage. That would be the 1995-W, which, with its mintage of 30,125, made Whitman’s list of the 100 Greatest Modern U.S. Coins.

On October 19 the Mint will release the 2017 American Liberty Four-Medal Set (product code 17XD), which has been priced at $199.95. Each set consists of four 1-ounce silver medals, each with a unique finish and mintmark:

That will just about conclude the year’s regular and special programs—commemorative, American Eagle, American Buffalo, American Liberty, and annual sets. The rest of the year will be devoted to winding up the 2017 America the Beautiful quarter series: three George Rogers Clark National Historical Park releases and the 2017 ATB Circulating Coin Set.

Whitman authors will speak at 2017 ANA “Money Talks” in Denver