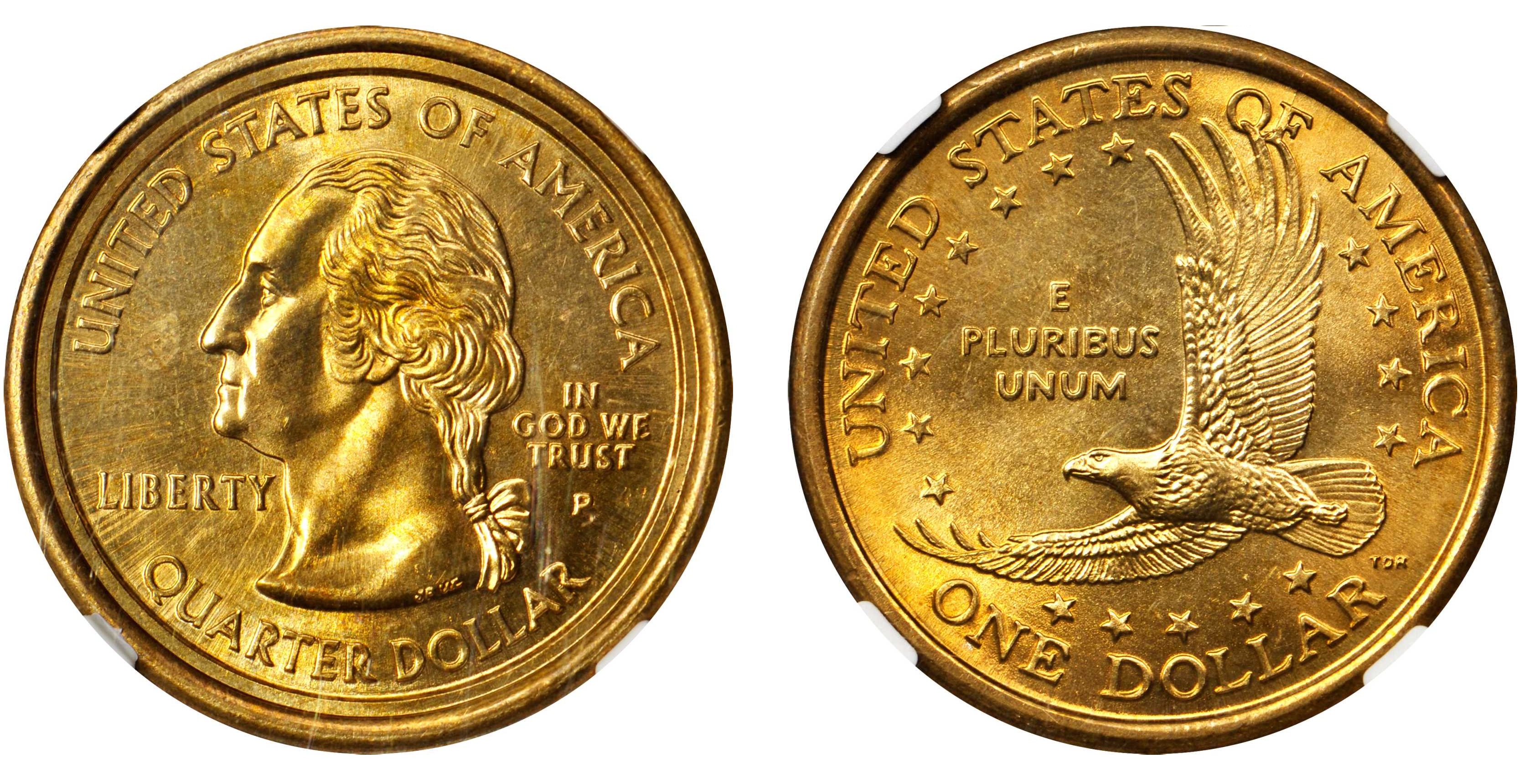 Santa Ana, California — Stack’s Bowers Galleries is delighted to offer the 17th known example of the famous (2000)-P Sacagawea dollar / Washington quarter mule in their official auction at the Whitman Coins & Collectibles Baltimore Expo this March. This blunder is among the greatest Mint errors of modern numismatics and has captured the imagination of collectors and roll hunters for two decades.

The newly offered example is gorgeous and exhibits golden tan surfaces with areas of rich honey color. The pristine surfaces are complemented by satiny, cartwheel luster and bold definition of the design elements. Die striations at the border are seen on all known examples, creating a spectacular sunburst effect that is at its most dramatic on the obverse.

The creation of such a coin would seem impossible considering the rigorous standards of the modern U.S. Mint. However, a “perfect storm” of circumstances allowed for this incredible issue to emerge. According to leading error coin expert Fred Weinberg, around 1998 or 1999, the Mint instituted an Occupational Safety and Health Administration rule requiring employees in specific roles to be rotated into other positions on a periodic basis, adding to the potential for confusion in the die room. Sometime in the spring of 2000, a coin press operator requested an obverse die for the new Sacagawea dollar from the die room and was instead given an obverse die for a quarter.

Many thousands of these dramatic errors were struck before Mint employees noticed the mistake, but, once discovered, employees culled out and destroyed all the muled coins they could — or so they thought. A few examples escaped, and in late May 2000, the first was found in a roll of new Sacagawea dollars by Frank Wallis in Arkansas. While initially there was some debate as to the authenticity of the error, as well as the legality of owning the coins, the Mint acknowledged the error as genuine on June 19. Bowers and Merena sold the rare discovery piece at the August 2000 American Numismatic Association Millennium Sale for $29,900 — a shocking price — as this mule was virtually unknown at the time. It has been reported that examples were sold privately in the neighborhood of $250,000 in 2007-2008. One piece sold for 158,625 in the Stack’s Bowers Galleries August 2012 Philadelphia ANA sale.

Today, these (2000)-P Sacagawea dollar / Washington quarter mules are highly prized by collectors for their dramatic appearance and rarity. Error enthusiast Tommy Bollock owns 12 of the 16 previously known specimens. The present offering in Stack’s Bowers Galleries’ official auction of the Whitman Coins & Collectibles March 2018 Expo represents a new discovery and a new opportunity for collectors to acquire this trophy. This magnificent error will be sold alongside such spectacular highlights as a Specimen-66 1860-O Liberty Seated half dollar and the magnificent Proof-63 Cameo 1879 Quintuple Stella from the Garrett Collection. Contact the firm at 1-800-458-4646 or email  to secure your copy of this catalog, featuring rarities from the A.J. Vanderbilt Collection, the Joel R. Anderson Collection, the Dobbins Collection, the RSC Collection, the Sutton Court Collection, the ESM Collection, and many other significant cabinets. Also, download their mobile app to view and participate via your Android or Apple device.