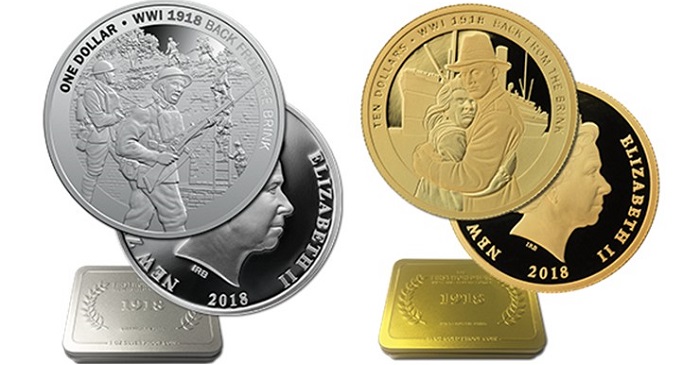 The Reserve Bank of New Zealand have launched (12th March) the final installment of gold and silver proof coins which are part of an overall series that was made in remembrance of the centenary anniversary of the commencement and conclusion of the Great War — later referred to as World War I.

The gold and silver coins are the final pieces in the five-year First World War coin programme, which was begun in 2014 and drew attention to the contribution of the fighting men from New Zealand, who supported the home country of Great Britain from the very beginning. The series recognises and pays tribute to the Kiwi servicemen who experienced the horrors of this dreadful battle — those who died, those who survived, and those who returned home marred by injury, illness, and psychological trauma. Contrary to the current situation, much of the severity of their afflictions went unrecognised at the time.

As the war continued its persistent trudge into 1917, New Zealanders began to grow weary of this Great War that seemed to have no end in sight. While small victories, such as the taking of the Sinai Peninsula, came as good news and seemed to boost the morale of those back home, the larger picture was still looking grim. New Zealand would experience the deadliest day in its military history when 845 lives were lost at the Belgian town of Passchendaele. The final push to the conclusion came towards the middle half of 1918 when it was evident to all but the German-Austro Hungarian alliance that their cause was lost and that they were facing certain defeat. Toward the year’s end, conditions to end the fighting were couriered over to the supreme commanders heading Imperial German, Austro-Hungarian, and Ottoman forces for an unconditional surrender which was agreed to with the formal end to the fighting arriving on the 11th day of the 11th month at 11:00 in the morning. The armistice was signed and the fighting ceased, but the casualties were immense on both sides, with a generation young men having suffered in ways not realised at the time. The advent of “modern” warfare, which included the use of chemical weapons and gases for the first time, the long road back to recovery would be long with many succumbing to their wounds.

For soldiers from the Empire who fought in the war in Europe, they came home to the same physical and emotional challenges facing their compatriots in Europe and America but additionally to a sense of national identity not previously expressed. Four years of conflict had affected New Zealand, for instance, not in the same way it had done to the home country, but as many states were emerging as independent nations as a result of the break-up of greater continental empires. New Zealanders also essentially came into their own with both a sense of respect and accomplishment.

The silver and gold coins are produced by the Royal Australian Mint on behalf of the Reserve Bank of New Zealand and are designed by Strategy Creative of Wellington. 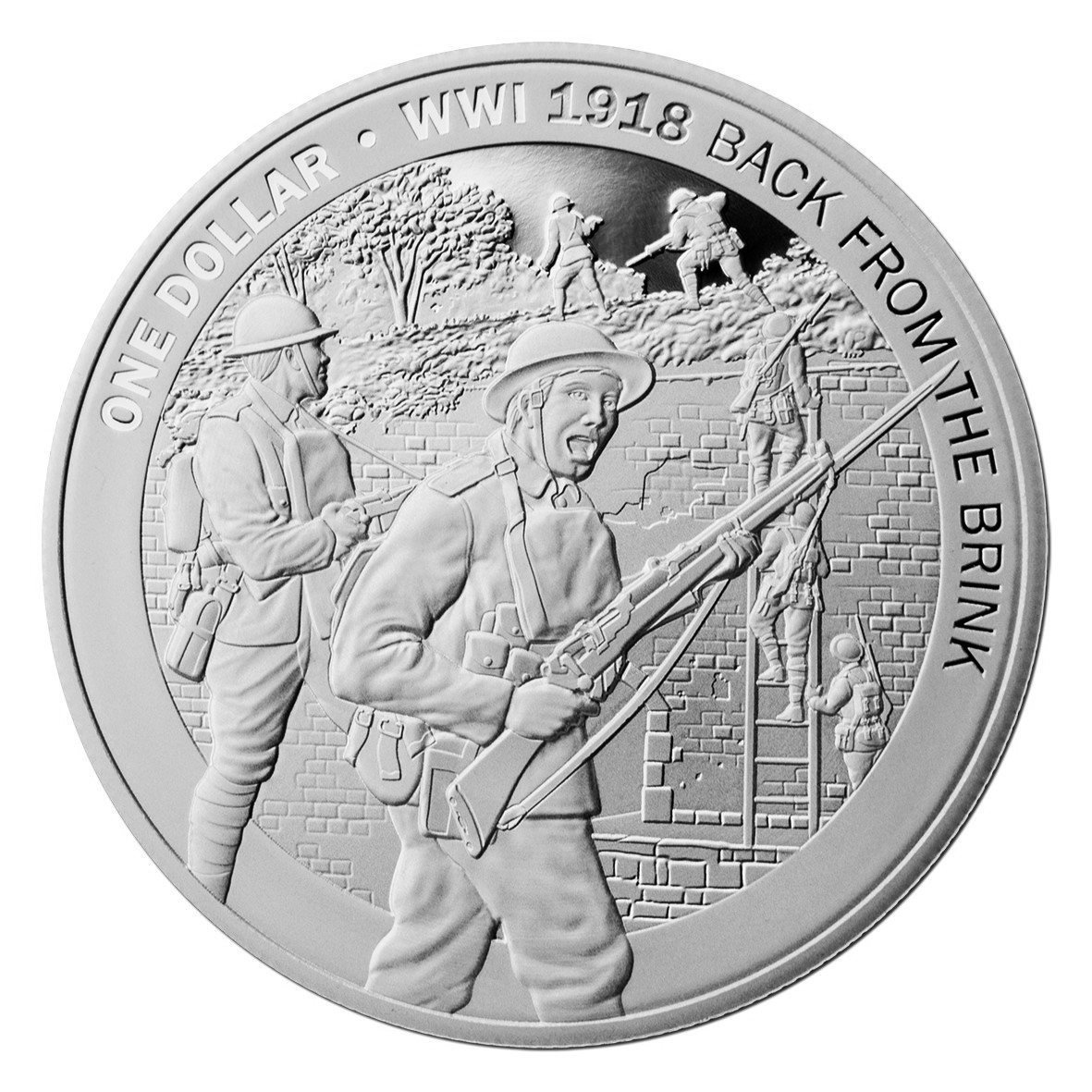 $1 silver: The last major action of New Zealand during the war was to liberate the town of Le Quesnoy in Northern France. To this day, New Zealand is still honoured throughout the town for the huge role which it played. Street names carry New Zealand Place names, a primary school has the name of a New Zealand soldier and there is also a memorial for New Zealand. Although the taking of Le Quesnoy was the Kiwis’ last push, it was far from the only one. All along the Western Front, Kiwis played a major role and fought heroically in the midst of hellish conditions.

The reverse side of the coin depicts a company of soldiers as they begin the dangerous climb up and over the walls of Le Quesnoy on the 4th November 1918 — one week before the official cessation of hostilities. The French town had been a stronghold for Imperial German forces throughout the entire war, but thanks to the Kiwis, that was about to change. This bold and unexpected assault freed the townspeople from four years of occupation. 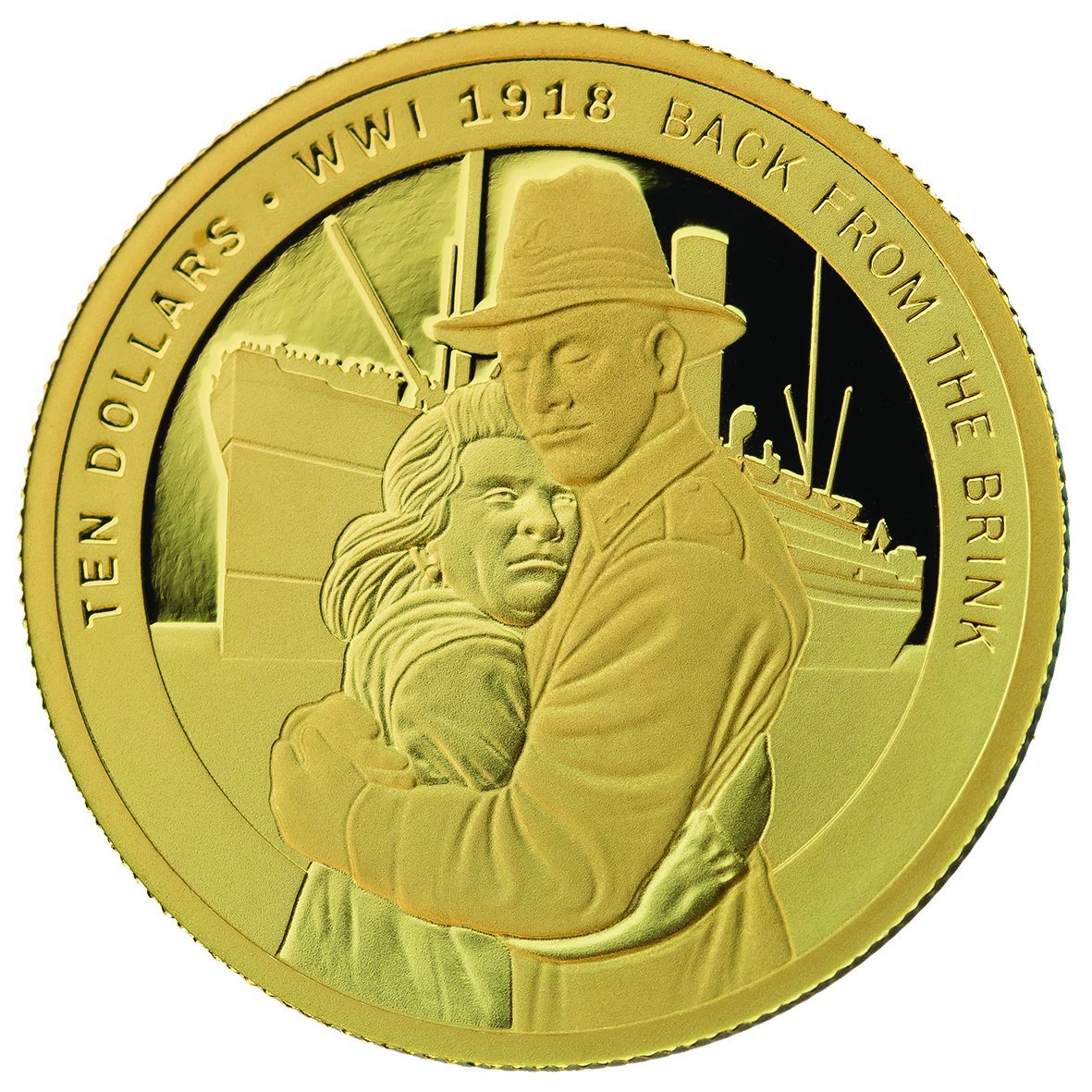 $10 gold: While the war was finally over, the next immediate task was getting everyone home. Thousands upon thousands of people all needed to get back to their friends and families, and New Zealand was no different. Due to the wide dispersion of troops, there was no easy way to bring everybody home at once, so people began arriving in very small numbers. When the Armistice was signed, around 30,000 had already returned home or were on their way due to various reasons such as injury or long service. This still left around 50,000 needing to be brought back to the welcoming shores of New Zealand.

In direct contrast to the first coin in this five-year series, which showed families being torn apart as they bid their farewells, the design on the reverse side of this coin shows loved ones embracing and tears of joy at having returned safely, thereby capturing the magic moment of reunion. A large ship in the background gives an insight as to how people were returning home after their long stays abroad. 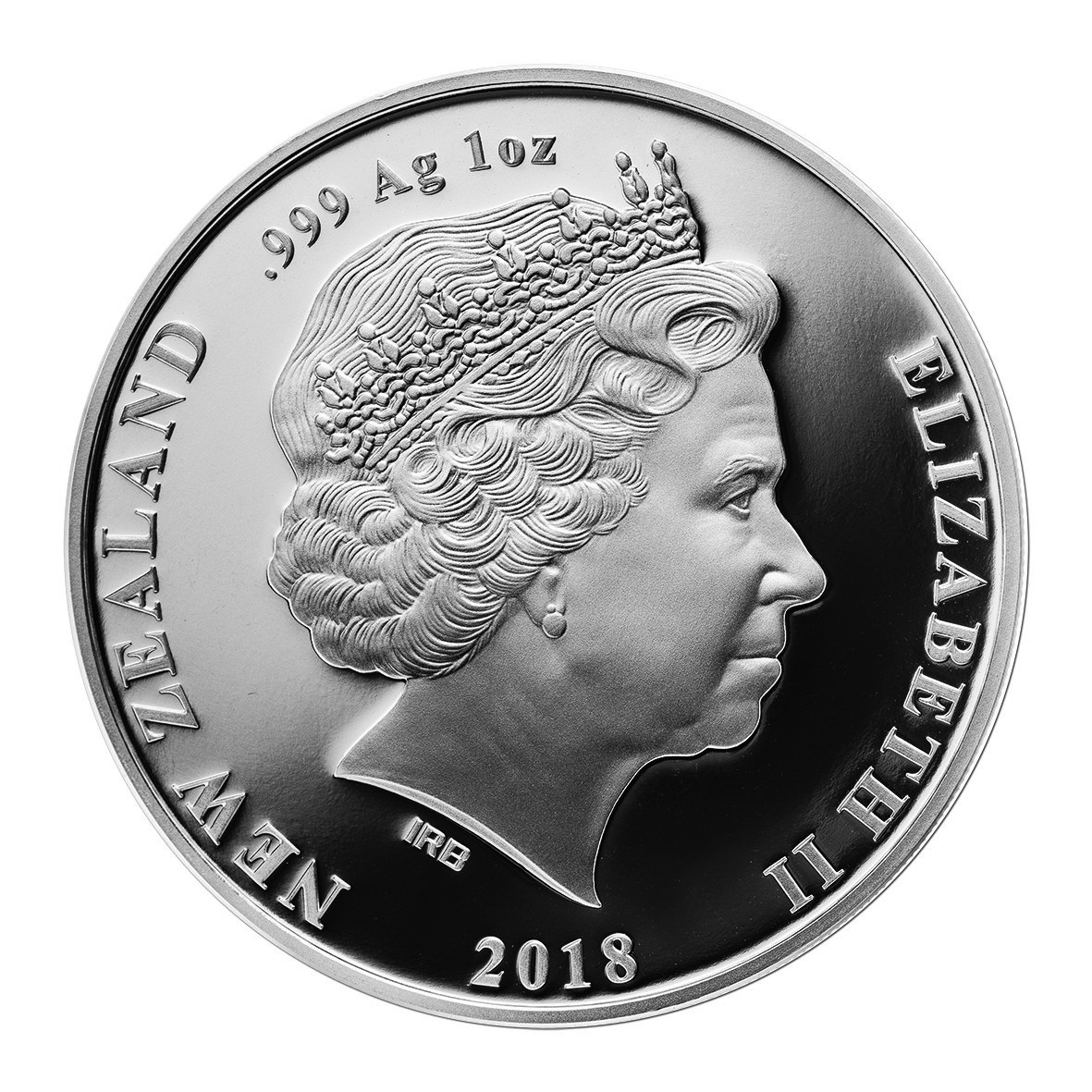 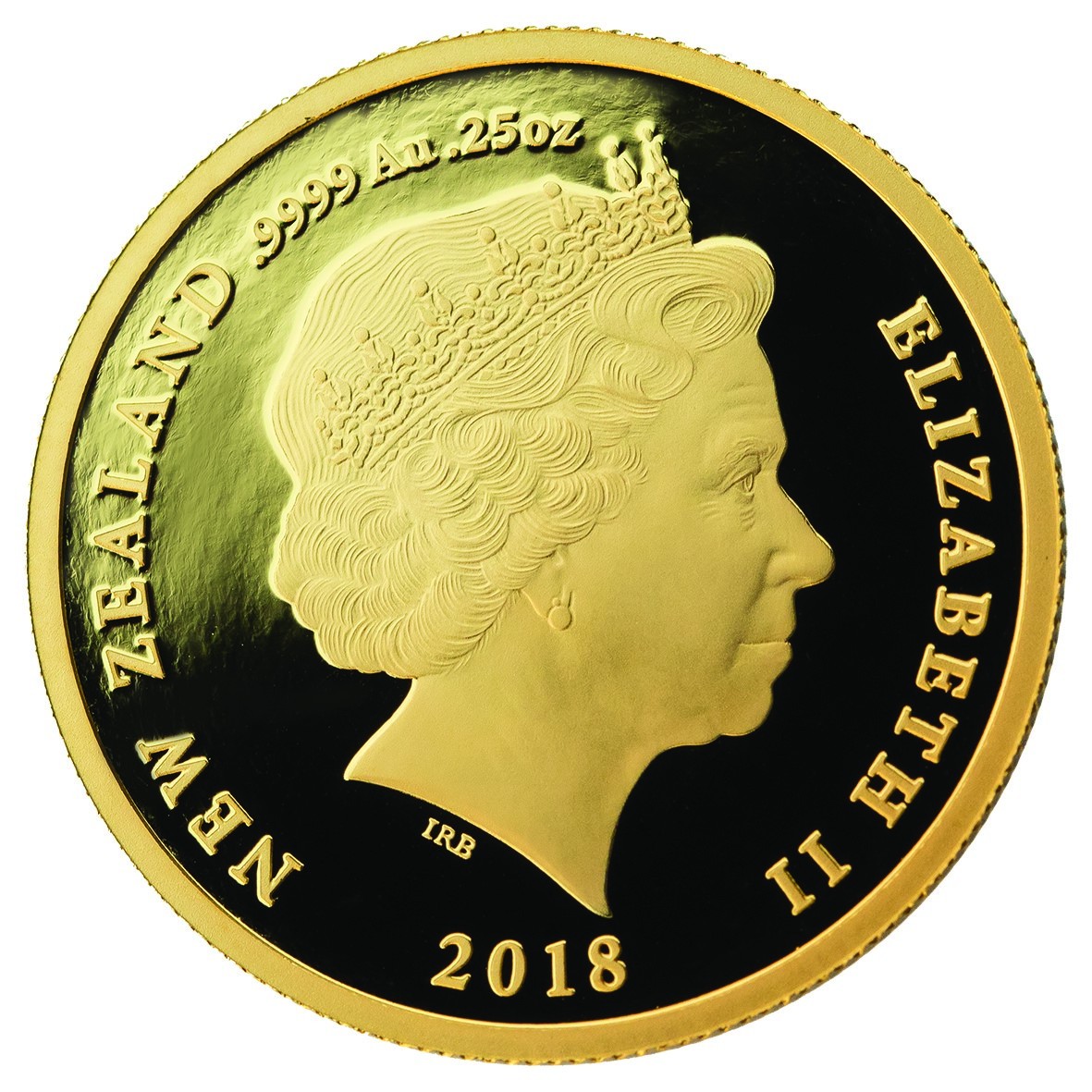 The obverse side of both coins includes the effigy of HM Queen Elizabeth II, as created by Ian Rank-Broadley, which has been used on all circulation and many commemorative coins issued in New Zealand since 1999.

Both the gold and silver coins are individually encapsulated and presented in a replica pressed metal tin which is designed to resemble those given as gifts to soldiers in World War I by HRH Princess Mary at Christmas. The gold coin’s box is gold-coloured and the silver coin’s box is silver in colour and each coin is accompanied by a numbered certificate of authenticity. The coins will be available from the 4th April with pre-issue ordering taking place from now until their anticipated sellout. For additional information on these and other coins issued by the Reserve Bank of New Zealand, please visit the website of the New Zealand Post.