The Reserve Bank of New Zealand have announced a new silver coin to mark the upcoming Royal visit of Britain’s Prince William, the Duke of Cambridge who will be accompanied by his wife Catherine, the Duchess of Cambridge and of course – their eight-month old son, Prince George.

The visit of the Cambridge’s will begin in New Zealand on Monday 7th April, before traveling to Australia on Wednesday 16th April. The Royal Tour concludes on Friday 25th April which will have lasted two weeks and three days. The Royal couple were officially invited by both New Zealand and Australian governments and while The Duke of Cambridge has visited both countries several times, The Duchess has yet to travel to either. The Tour will provide the opportunity for The Duke and Duchess along with their young son to visit a number of towns and cities across both countries. Specific events will celebrate Australia’s and New Zealand’s success in the fields of technology, tourism, sports and the creative arts.

The visit is being compared to the Royal visit undertaken in 1983 when the Prince & Princess of Wales toured both countries with 9 month Prince William who stole the show during arranged press conferences. 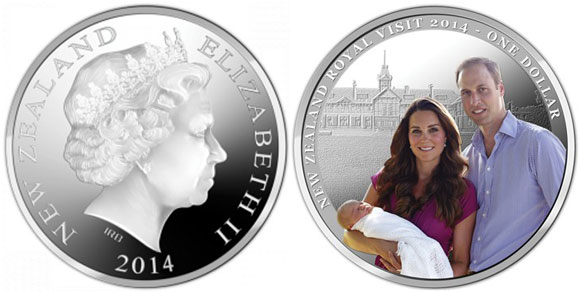 The coin, struck by the BH Mayer’s Mint in Germany on behalf of the Reserve Bank, includes a rather familiar image of the reverse – an informal family photo taken at the Middleton family home by Prince George’s Grandfather and the Duchess’ father Michael Middleton just days after arriving home from hospital. The anticipated & celebrated photo was viewed by millions who had another glimpse of little Prince George asleep in the arms of his proud parents. The photo is included on the coin as a color application along with an image of Government House in Wellington. The obverse includes the very familiar effigy of HM Queen Elizabeth II as designed by Ian Rank-Broadley and in use on commemorative and circulation coins of New Zealand since 1998.

New Zealand Post, authorized retailer of the coin are taking pre-issue orders – a set of two stamps featuring the coin’s photo as well as a photo taken during Prince George’s christening are also being issued along with the Royal Visit coin. For more information on both products, please visit the website of New Zealand Post at: http://coins.nzpost.co.nz/2014/royal-visit-silver-proof-coin Information offered in English – international orders dispatched.